A triple assault of HEAVY laid waste to the Irish capital as Sepultura, Sacred Reich and Crowbar made significant dents to sold out Academy venue. 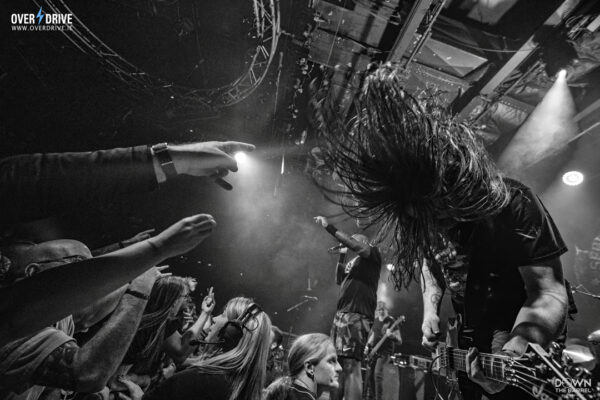 With some of the most solid live acts within the metal sphere all billed together for a glorious assault of the senses, there’s really no question about whether to attend or not. Tonight’s sold out capacity were wise enough to secure their tickets all those years ago (prior to the Pandemic) and from what I could see, lapped up every sonic morsel they could harvest from the stage as all three bands delivered knock-out “headline” performances. 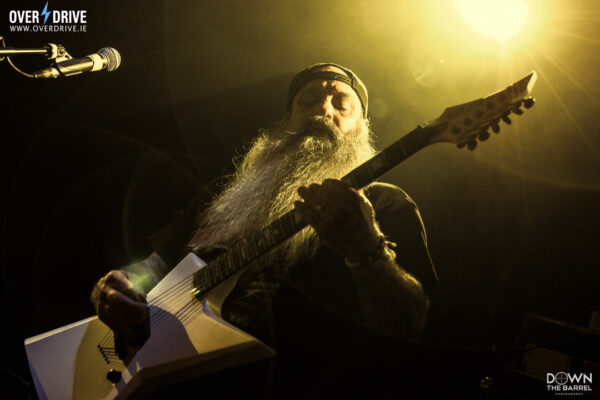 First up tonight is Crowbar. You know you’re in for a good night when fucking Crowbar are the opening band, right? Sounding as heavy as stampede of whales, Kirk Windstein and friends, ripped through some classic bangers such as set opener, ‘Conquering‘, including ‘Planets Collide‘ and ‘Like Broken Glass‘, which instantly command immediate action from the pit throughout their set, much to the surprise of the venue’s security, who jumped into action almost from the get go.

Windstein was in great form as he expressed his love of Dublin being “one of my favourite cities in the world“, while lifting his Gandalf-level beard to reveal a Thin Lizzy t-shirt, much to the praise of the audience’s deafening cheers. Finishing up with chants of “CROWBAR-CROWBAR” (at the request of Windstein), the four-piece say their goodbye’s before a flurry of stage techs prepare for the arrival of the mighty Sacred Reich!

With this being their biggest stage to date on Irish soil, Sacred Reich’s frontman/bassist, Phil Rind appears on stage with a huge smile while Thin Lizzy’s ‘Boys are Back in Town‘ blasts from the house PA.  After a brief introduction welcoming everybody to the show, the band kicks off with ‘Divide and Conquer‘ followed by, ‘The American Way‘, to which The Academy responds with good friendly violent fun. 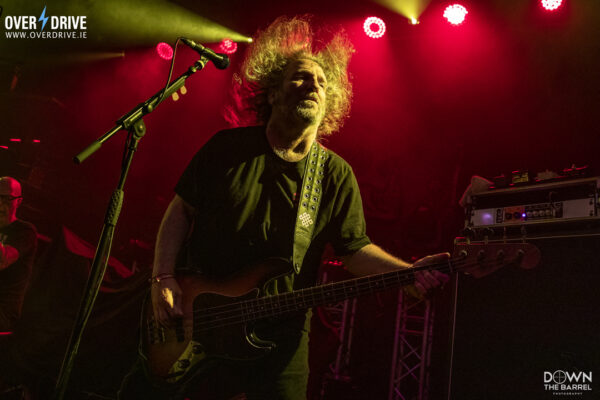 Lack of space on the stage sees drummer, Dave McClaine front and centre wedged between the house monitors and Eloy Casagrade’s kit, but that didn’t detour his laser focus as he lays down the bombastic foundations for he and his bandmates for the duration of the show. Having seen Sacred Reich back in the early ’90s, and many times since their return to the live stage, its heart warming to see them well and truly on the top of their game here tonight.

From ‘Who’s to Blame‘ to ‘Awakening‘, to ‘Independent‘, Sacred Reich are just a phenomenal band. The art of writing material that is evergreen, comes naturally to them as they pull out classics as far back as ’87 with ‘Death Squad‘ to tracks from their recent opus, to which all sound as relevant as the day they came out regardless of what decade it was.

Finishing up with ‘Surf Nicaragua‘, there’s no question that another hour of Sacred Reich would have been welcomed by all. Let’s hope that 2023 sees a new album in the works and they return to headline their own show on their next trip to Ireland.

Now that the venue is well and truly warmed up for Brazil’s finest heavy export, The Academy is stuff to the gills as Black Sabbath’s ‘War Pigs‘ sets the tone. Opening with ‘Isolation‘ (the opening track from their latest album, “Quadra“), As soon as the track bursts into life, the main floor of the venue looks like a washing machine set on spin setting…and it’s fucking glorious.

By far one of the most astonishing drummers in the Metal universe, Eloy Casagrande is just as captivating as ever as he attacks his kit like his life depended on it. Unreal stuff indeed!

Cutting an imposing figure, man-mountain Derrick Green rustles up some of the most brutal guttural vocals, that at times leaves some with open jaws as and his bandmates plough through a rich catalogue of songs that tip the hat to their impressive 40-year (and counting) career.

Original members Andreas Kisser and Paulo Jr remind us all why Sepultura dominated when they first gate-crashed the international Metal scene back in the late ’80s and with solid gold classics such as, ‘Territory‘, ‘Dead Embyronic Cells’, ‘Infected Voice‘, ‘Refuse/Resist‘, ‘Arise‘ and ‘Roots...’ etc and as each cut of sonic aggression comes from the stage like heat-seeking missiles, it’s hard to believe that people still grip about the loss of the classic Cavalera line up.

The fact of the matter is, present day Sepultura sound better than they ever have done. If you have a problem with that, I truly feel sorry for you. The bands new direction with 2017’s Machine Messiah and the pummelling force of ‘Quadra‘, shows a confidence that is progressing, evolving and… well embracing their future. If you’re one of those people stuck in in the mid-’90s then perhaps its time to move on? Just a thought.

As they wind down, with a now exhausted, but invigorated packed venue, we are treated to ‘Ratamahatta‘ and finally, ‘Roots Bloody Roots‘, which just blows the roof off the venue. Under the playback of Phil Collins ‘Easy Lover‘, the band give out high-fives, splintered drum sticks and worn out guitar pics to the frenzied front row of dedicated fans.

Overall, what we witnessed tonight was a three outstanding bands that, in their own way, executed headline-level performances. Here’s to the next time.

All photography – Down The Barrel Photography, exclusively for www.overdrive.ie. © 2022. All Rights Reserved.