Let’s face it. It’s been a long, long wait for Ireland to get the multi-instrumentalist, that is Steven Wilson on Irish soil to perform. In fact, it’s been as long as 2010 since Wilson ventured across the Irish sea back when he was touring with his other project, Porcupine Tree in Dublin’s, now closed, Tripod venue. Tonight, that wait was finally over. 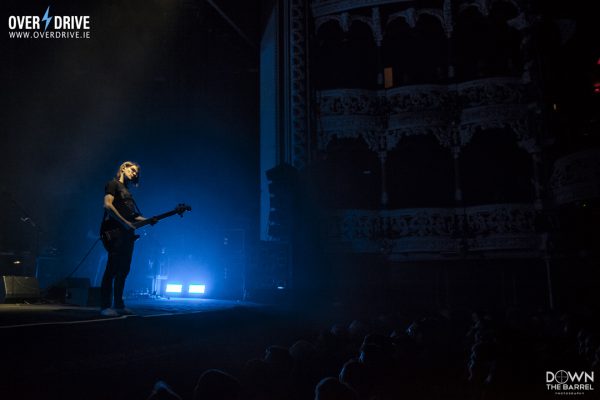 There are few artists that would pry me away from the warm, conformable confines of my living room on a bitterly cold Bank Holiday evening.

Throw in the fact that it’s the Monday after St. Patricks Day/weekend celebrations and the stakes are raised considerably.

So, when news landed in the Overdrive office that Steven Wilson will be returning to Ireland for a headline show in the capital’s iconic Olympia Theatre with full production and a backing band that was delivered by the Gods themselves, there was no hesitation at all.

Tonight’s surprisingly seated layout, gave a certain intimacy to the show regardless of the enormity of the Olympia which, as Wilson proclaimed himself ‘is totally unnatural for me and not the normal set up”. Did it bother anyone? Not that I could see, as we all collectively knew that, the music will be far more rewarding than any seat, present or absent.

A BBC style announcement booms throughout the venue informing tonight’s audience of the nature of the show and with a nylon projector screen in place between band and audience, a clever montage of powerful images, simply entitled “Truth” begins to flash in sequence to a more sinister backing-track, prior to the arrival of Wilson and company. 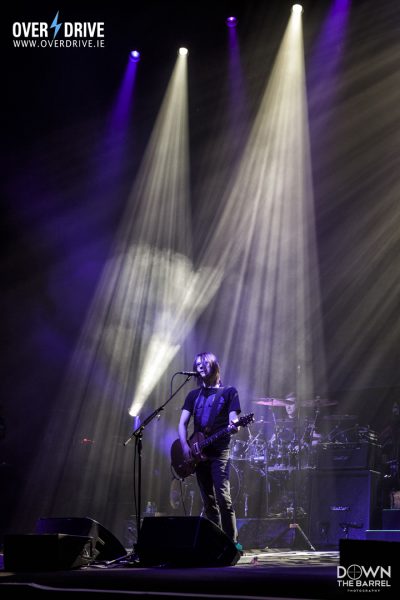 Opening with ‘Nowhere Now‘ and followed quickly by ‘Pariah‘, the first thing that is abundantly clear is the balance and the comprehensibility of the overall aesthetic marriage between the sound and visual elements.

Wilson’s laid back and desert-dry wit provides a welcome, and at times, comedic element to the performance, allowing his personality to shine through in just the right moments, which in turn loosen up the audience and generally cushions the awkward between-song moments, so many artists struggle with, especially during seated shows.

We are treated to a razor-sharp rendition of the hypnotic ‘Home Invasion/Regret #9‘ which floats from the stage, loaded with enough sass to scare off a coven of alley cats. Guitarist Alex Hutchings takes on the task of ‘The Creator Has a Mastertape“(Porcupine Tree) with ease as does the rest of Wilson’s band.

Almost upstaging Wilson at times, drummer Craig Blundell is simply outstanding to witness, as he glides over and back across his percussion domain, like a wizard waving two wands at a furious rate. 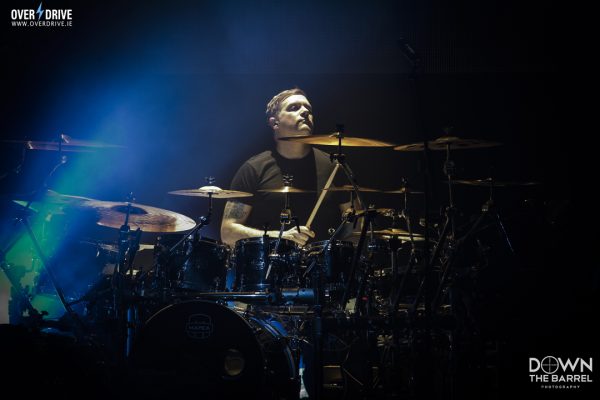 With tonight’s performance being split into two sets, Wilson takes us through “Refuge“, “People Who Eat Darkness” from recent album ‘To The Bone‘ and finally “Ancestral“, from his 2015 ‘Hand Cannot Erase‘ opus, before a 20 minute intermission.

Returning to the stage with a stack of Porcupine Tree treats up his sleeve, Wilson launches into ‘Don’t Hate Me‘ giving keyboard master Adam Holzman a near standing ovation for his solo. More PT gems come in the form of ‘Lazarus‘, ‘Heartattack in a Layby‘ and ‘Sleep Together‘, all peppered in amongst cuts from ‘To the Bone‘ and 4 1/2 ‘s ‘Vermillioncore‘.

I was interested to see how the audience would take Wilson’s his self-confessed attempt at emulating his idol, Prince, with his infectious, radio-friends pop inspired track ‘Permanating‘. Almost immediately, (with a little coaxing from Wilson) the audience rises to their feet (finally). 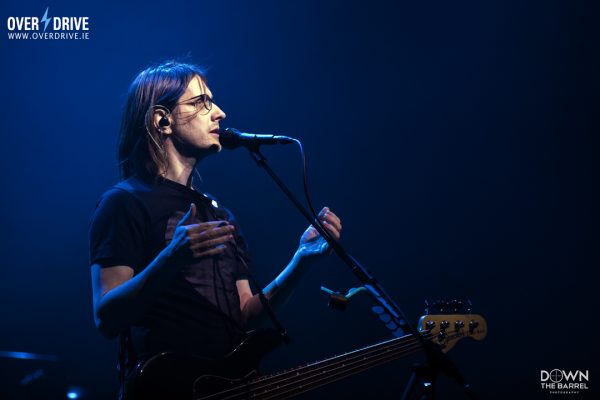 Throughout the evening we are treated to a selection of mesmerizing visuals that includes a large screen at the back of the stage, as well as the nylon curtain which at times, displays hypnotic images of dancing women bathed in rich predominant colours. A simple concept, but highly engaging and immensely complementary to the music itself.

With very little talk on the agenda tonight, Wilson lets the music do the communicating and rightfully so. To his right stands multi-instrumentalist Nick Beggs, who, throughout the evening can be found on bass duties mostly, however, his ability to produce some wonderous sounds on a Chapman Stick, was nearly too much to take in at times. 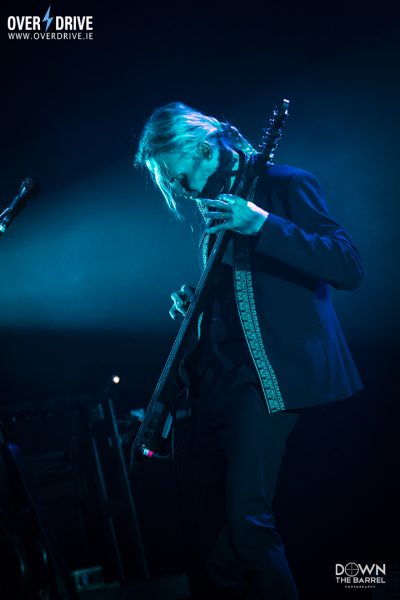 Rounding off tonight’s performance encore see’s Wilson back on stage for a solo performance of 1999’s ‘Even Less‘ (Stupid Dream), which he tells us is the first song that he wrote that he felt was ‘a real song’. An interesting take on the original that we all know, however an entertaining version all the same.

With the rest of the band joining him on stage, Wilson takes us through ‘The Sound of Musak‘ and finally ‘The Raven That Refused To Sing‘ before he bids his farewell to The Olympia.

Overall, tonight’s performance was everything I had hoped for, and more. The impact that tonight’s performance evoked from the audience, is simply an emotion that is, as much elusive, as it is baffling when considering most of the generic, meaningless noise that is currently clogging airwaves on a daily, monthly and yearly basis.

A stunning performance from start to finish. 4.8/5

Follow Overdrive and keep up with all our daily news, exclusive interviews, competitions, gig announcements and much more!