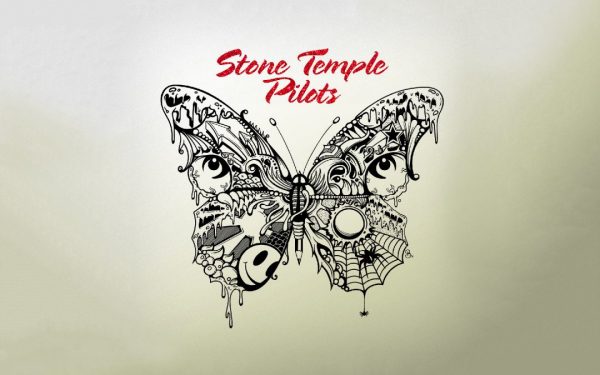 It’s not an easy task, replacing a singer. Take into account the enigma that was Scott Weiland and that job becomes way harder.

Enter one Jeff Gutt, the former vocalist from Nu-Metal outfit Dry Cell and more recently a contestant in America’s televised X-Factor franchise. Now fronting one of the most popular rock bands of the 90’s, can the legacy of Stone Temple Pilots continue with the absence of Weiland? Overdrive get’s stuck into the bands latest self-titled album to find out.

Opening track ‘Middle of Nowhere‘ opens with more of a contemporary sounding STP rather than the classic, bombastic anthems you would find on their early albums. This is all about the new singer Jeff Gutt, who is standing in some rather difficult shoes. From the outset, Gutt has most definitely got Weiland’s tone, but does he have the swagger.

Second track ‘Guilty‘, plods along and offers moments of clarity, but mainly sounds a little jumbled with a floaty sequence of layered riffs that drift off the path and meet up for the chorus that, to be honest, doesn’t really grip like it was intended.

Up next is ‘Meadow‘, which was the first cut from the album to test the waters, and with a solid driving beat from both Robert DeLeo (bass) and Eric Kretz (drums), the obvious ghost of  Weiland haunts the verses, raising the question of just how much input Gutt had on the writing and arrangements during the recording process.

Just a Little Lie brings in a network of riffs that at times struggle to live side by side and, that’s where the main problems lie. Dean DeLeo’s cookie approach to arrangements is in full bloom here, with a miss-match of riffs that interchange in melody and weight, which seems a little off-putting at times.

A promising start to ‘Six Eight‘ quickly offers another plodding verse before a show of strength from Gutt, as he opens his pipes for the chorus. There is something about the structure of the songs that I’m struggling to latch onto and just can’t seem to follow the unpredictable, swerving of melody, pitch and key changes that wander through the solid aspects of each song, ultimately pulling the attention away from the true essence of tracks.

‘Thought She’d Be Mine‘ bobs along with a steady acoustic vibe and chorus, but by no means is a radio hit or even a melody that would lock its self in your brain, much like what STP used to be able to achieve way back when.

Dean’s guitar work is undeniable and impressive in parts, however, there is a sense that he’s trying to cram way too much into each track. Case in point, ‘Roll Me Under‘ offers a blistering chorus but falls by the wayside during the verses, as there is an overwhelming ‘loose’ presence here, almost like a live unpredictable jam session where the band are going free fall but pull it back for each chorus.

“Never Enough” reeks of Zeppelin and Deep Purple before the handbrake gets yanked and we are off the road into a drift-like swirly chorus, that once again, takes what could have been a real solid stomper.

‘The Art of Letting Go‘ to me sounds like a track that you would most likely find at the very end of a Rom-Com movie credits, and I mean at the very end. Who they are trying to appeal to here is beyond me. Whatever about the airy-fairy structure throughout the album, this track wanders from major to minor keys, with a loose, loungey jazz guitar solo from Dean and bizarre transitions from chorus into verse, and to be very honest, is instantly forgettable from the moment the song ends.

Following on with ‘Finest Hour‘. This track continues where the previous ‘audio fluff‘ left off, begging the question of ‘what the fuck is going on?‘ hanging in the air. ‘Good Shoes‘ brings in one of the most solid riffs from Dean on the album with a well-constructed marriage between vocals, rhythm and overall vibe. There is still a sense of ‘free jam’ on the track but in this case, works well.

Another breezy acoustic number comes creeping out of the woodwork under the title ‘Reds & Blues‘ and offers just about nothing in terms of helping the overall impact of the album. The wandering solos and loose vibes continue here, with nothing memorable at all, and I mean nothing.

Overall, this offering from Stone Temple Pilots is a letdown. It’s a genuine struggle to develop a relationship with these 12 tracks, as they drift and wander all over the place with no real identity.

STP’s core audience know their ability to produce memorable tunes with heart-soaring choruses and punchy rock energy. This album does not provide those attributes, begging the question as to whether the band even know who they are, or what they are trying to achieve in 2018.

Stone Temple Pilots is out now via Rhino Records. You can purchase your download here.