It’s been a long time coming, but the day finally arrived! Thrash metal legends TESTAMENT finally took to the stage in Ireland for their very first headline show following a 35-year legacy that has produced some of the most important albums within the metal history books. To add to this historical event, ANNIHILATOR and VADER completed the lineup! 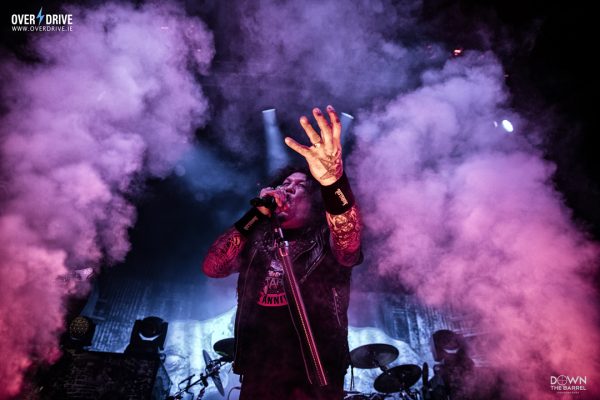 Bay Area legends, Testament, finally brought their first headline show to Ireland after multiple visits to our shores over many decades, as special guests/support for the likes Anthrax, Judas Priest and more recently Amon Amarth.

When you take into consideration how this event had never happened before, it’s somewhat mind-boggling. With a career that started back in 1983, Testament‘s legacy is regarded as important as fellow peers Metallica, Slayer, Anthrax and Megadeth.

Their contribution to heavy metal as a whole, not to mention their pioneering influence on the explosion of thrash metal in the early 1980’s, will go down in history, as being one of the most crucial and important bands in the genre’s history, and tonight, Ireland get’s what they’ve been waiting for. Let the mayhem begin…

It’s Easter Sunday, and there is no better band to kick off tonight’s metal ceremony, other than Polish Death Metal crew, VADER! With the venue three-quarters full for Piotr Wiwczarek and company, the band offer up “Chaos” as tonight’s starter, which immediately grabs the attention of the venue, who lap up every morsel. 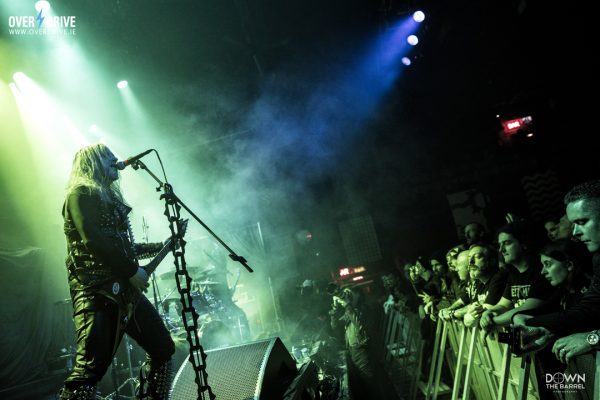 Always a good sign when the opening band’s sound and lights are of an exceptionally high standard and tonight, I have little to fault. Powerhouse drummer, James Stewart thunders through ‘Vicious Circle‘ and ‘Triumph of Death‘ with flawless ease, showcasing his remarkable talent under the wonderfully brutal landscape of crushing riffs, provided by Wiwczarek and Marek Pająk.

With little talk from Piotr, VADER pummels Dublin with bangers such as “Wings” from their colossal 2000 ‘Litany‘ opus, all the while each member of the band dripping with visceral intent and gritted toothed dedication, to hammering the audience as best they can in their short, but impressive set. 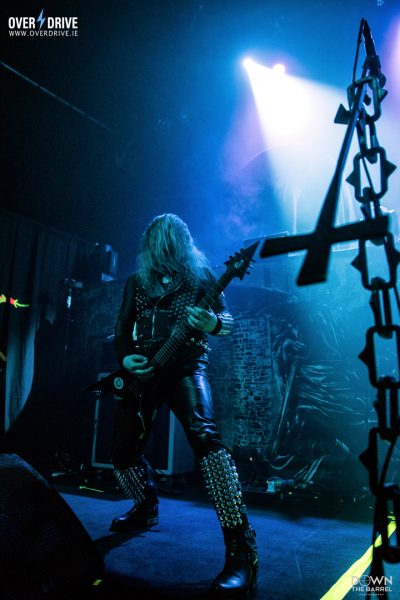 Highlights for me included, ‘The Crucified Ones‘ (2017, Dark Age) and ‘Send Me Back To Hell‘ (2016 The Empire) keeps bassist Thomasz Halicki windmilling to his heart’s content before they finish up with the magnificent sonic assault that is ‘Cold Demons‘. Stewarts drumming here alone is enough to send the place over the edge. Fantastic! 4/5

The last time ANNIHILATOR passed through the Irish capital was October 1st, 2015 and although that only seems like a few months ago, it’s never too soon when it comes to Canada’s most legendary Thrash metal exports.

With a near packed capacity venue, the opening sounds of ‘Crystal Ann‘ glide from the house PA to almost deafening roars from the ecstatic punters. Bursting on stage with unbridled energy is non-other than shred-master Jeff Waters who leads his crew (guitarist Aaron Homma, bassist Rich Hinks and drummer Fabio Alessandrini) into ‘King of the Kill‘ with a crystal clear sound under their wings.

Waters is in fine form tonight as he stalks the stage from left to right with a shit-eating grin on his face. Having seen Annihilator many times over three decades (yes, I’m old!), there is a real sense of balance in the current line up. Waters seems to have worked out a system that allows him to create and write for each album, which he then assembles ‘touring members’ for the live shows.

The band’s connection and energy on stage is contagious as they lead us down a path of bangers in the form of ‘One to Kill‘, ‘No Way Out‘ and ‘Twisted Lobotomy‘ from last years ‘For the Demented‘ release. 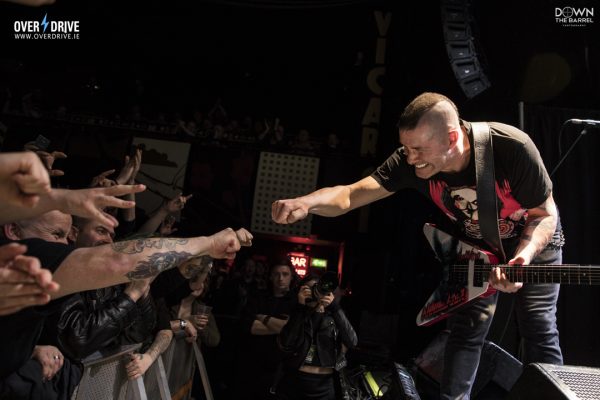 Waters ability to handle vocals, while gliding over his fretboard like a magician, is truly a sight to behold and begs the question as to why he bothered with vocalists in the past? His between song banter is loaded with amusing self-mocking, pumped enthusiasm ( “you can call us Anal-Eater if you want“) as he holds the entire venue’s attention in the palm of his hands.

1992’s ‘Set the World on Fire‘ comes bellowing out of the traps with its steady chugging pace, evoking centre floor pits to open up for the first time this evening followed by ‘W.T.Y.D.’ and the anthem that started it all, ‘Alison Hell‘. 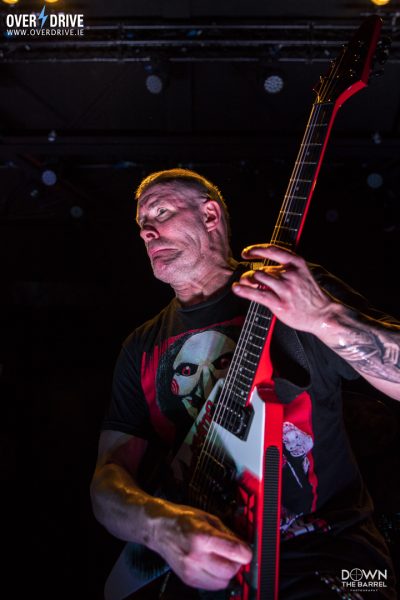 The venue erupts with approval as the opening chords come cascading from the arched PA, sending electrifying waves into the atmosphere. Waters is clearly having fun, as he assesses the crowd reaction to this metal anthem, which he penned back in the late ’80’s, in his Ottowa homestead, almost 30 years ago!

Where do you go after ‘Alison Hell‘, well you put the gas peddle down and smash straight into ‘Phantasmagoria‘ and judging by the plastic beer cups being launched into the air, the crowd approves. Pits burst open across the main floor, with a blur of fists and hair swirling in the dark corner of Vicar Street and it’s fucking awesome!

For such a short set, Annihilator simply annihilated and the sooner they get back here for another headline show, the better! Crushing! 4.5/5

With 1,500 thrasher maniacs packed into Vicar Street to witness one of Thrash Metal’s supreme live acts, it’s hard not to feel the level of excitement that hangs in the venue’s auditorium.

Think about this situation for a moment. It’s been the guts of 30 odd years that Bay Area five-piece, Testament, have been carving their name into the Heavy Metal history books, laying down some of the most genre-defining riffs and ground-breaking albums that have influenced an incalculable number of bands/artists the world over. 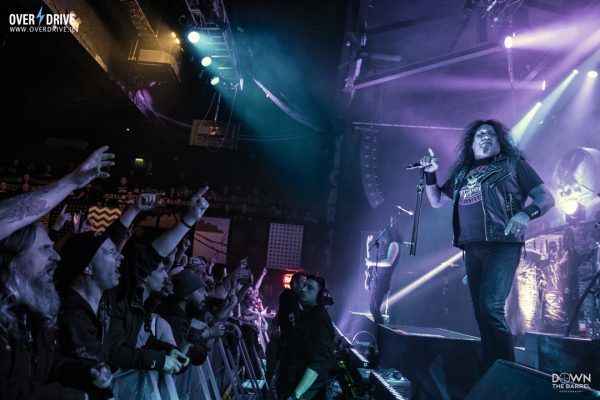 In all of that time, Testament have never had the pleasure of headlining a show in Ireland, so you can imagine the reaction the San Franciso natives received when then emerged on stage.

Tonight is for the history books folks and as they launch into the opening moments of the title track from their 2017 release ‘Brotherhood of the Snake’. The production alone is just metal-as-fuck, with their demonic mascot, who first appeared on 1987’s ‘The Legacy‘ taking presence on either side of the stage, while the menacing snake from the latest studio album lurks behind Gene Hoglan’s impressive drum kit in a flood of green and red lights.

The worlds best air guitarist, Chuck Billy stands like a giant, centre stage and leads his comrades into battle with an arsenal of bangers such as ‘Rise Up‘, ‘The Pale King‘, ‘More Than Meets the Eye‘ and ‘Centuries of Suffering‘ which literally rumbles the venue when Billy utters the closing lines of the chorus “Centuries of Bloooooooood“. 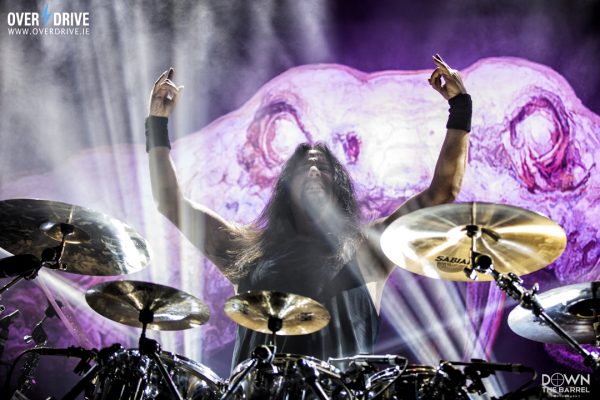 A rather unexpected spotlight solo from Skolnick brings things down a gear or two as all eyes are fixed on the lightning speed of Alex’s fingers, as he weaves in and out of an audio montage of riffs and solos, which include Gary Moore’s ‘Still Got the Blues‘ and moments of Steve Vai’s “Crossroads blues guitar duel“.

As the band take their positions back on stage under the whale of Skolnick’s guitar, Hoglan kicks in with ‘Electric Crown‘ (The Ritual 1992) which is the first track of the evening to delve deep into the bands back catalogue, giving us of an older vintage (cough), a walk down memory lane.

The venue’s security are doing a stellar job handling the waves of bodies that surf over the 1000 or so heads on the main floor, while we are treated to the face-melter, that is, ‘Into The Pit‘. 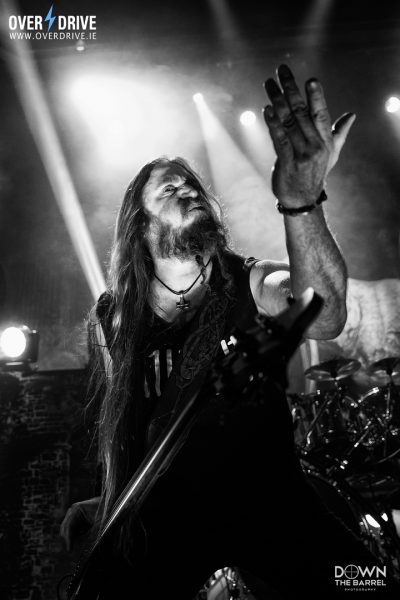 The towering presence of Di Georgio brings a meaty mix to tonight’s performance and as his staple stage moves in Death DTA involve grinning from ear to ear and hammering out some gut-vibrating, low-end bass, nothing has changed here tonight apart from the musicians/friends that surround him.

Up next is the unexpected classic “Low“, which Billy explains is part of a selection of songs they don’t normally, nor have never played live, especially for this tour. Once again, the older punters are in ” Testament Heaven” and proceed to show the kids a thing or two in the now mostly bare-chested pit.

Back to the present with “Stronghold” pouring from the stage under the blitz of Eric Peterson’s riffs and Hoglan‘s kick-peddle mania are pushing the limits of the performance to the edge of greatness and beyond. The balance of sound and stage production is a truly tremendous sight to behold as ‘Throne of Thorns‘ builds under the ominous backdrop and the hypnotic frontline attack from the band.

Following immediately, Peterson proceeds to torture his Dean and rip through his solo section, while the rest of the band slip into the darkness of the stage wings. Not being the biggest fan of such things (solos), especially when there is a wealth of material that can be performed in its place, one has to consider the intensity of the show and the prospect that Billy might need to gather his breath, which is completely understandable. 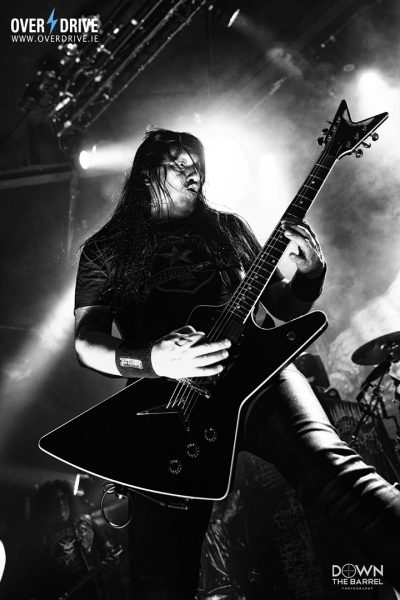 Leading back in with “Eyes of Wrath“, quickly followed by Hoglan’s drum solo, the crowd stand transfixed with some choosing this as the perfect opportunity to hit the bar and use the facilities.

Dipping into their back catalogue once again with 2001’s ‘First Strike Is Deadly‘ see’s Billy ripping out his air guitar solos, while leaving the duel assault to Peterson and Skolnick in centre stage. Yet, another frustrating solo follows, this time from magnificent Di Georgio who, after a few moments, is joined by Hoglan, Peterson and Skolnick for ‘Urotdukidoji‘ before Billy returns for the opening chords of ‘Souls of Black‘ and ‘The New Order’, which has the main floor in a blur of topless, hairy men and upsidedown bodies bobbing in the darkness before the band give their thanks and leave the stage!

An abrupt encore see’s Testament return allowing Chuck to tell a short tale about the bands first encounter with Pantera during a video shoot excursion down in Texas back in the 90’s. What follows is the magnificent ‘Practice What You Preach‘ (the solo exchange between Peterson and Skolnick is still as fresh as it was back in ’89) and the closing anthem, ‘Disciples of the Watch’ which literally lays waste to the venue’s energy levels.

As the band bid a final farewell to what was a historical show for Testament and all that attended, it’s hard to not consider tonight as being probably one of the most passionate and important gigs of this year’s Irish metal gig calendar. If you were there, you’ll know, and if you weren’t, then let it be known, you missed something truly special indeed. 4.8/5