Overdrive brings you the latest from the mighty Tuska Open Air Festival in glorious Helsinki, Finland. From Anthrax and Amorphis to Dimmu Borgir and Power Trip! Tuska 2019 opens up with a quality line up! Get it all below… 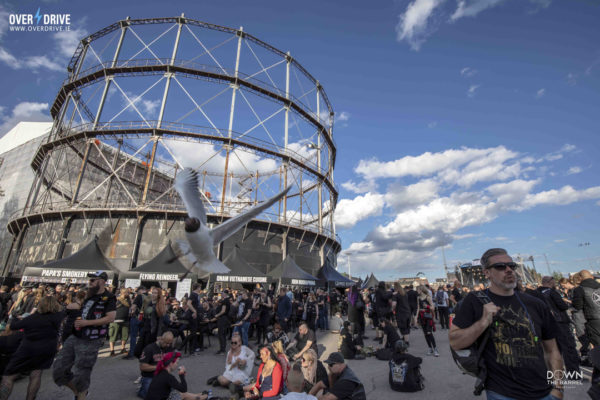 Friday is the opening day of Tuska Open Air Metal Festival in the Suvilahti area of Helsinki in Finland.

Nestled deep in an industrial dockland the festival site itself is drawn straight from a steampunk movie with a giant gasometer being the focal point on one end of the arena with power plant chimney stacks around the perimeter.

Overdrive is visiting for the Tuska for the first time but our photographer Steve, has been recommending “Pain” (Finnish translation of Tuska) for many years.

It’s a relatively relaxed start to the day with a 1pm opening time for the gates and for a Friday lunchtime there is a sizeable crowd gathered at the gates. It’s a new layout this year including the entrance which has been flipped to the far side to previous years.

Medeia open the festival on the Helsinki Stage marquee. They’re an alt death metal crew with hardcore leanings. Frans Aalto’s face is maniacally altered as he berates the audience who are in full voice with chants and lyrics. 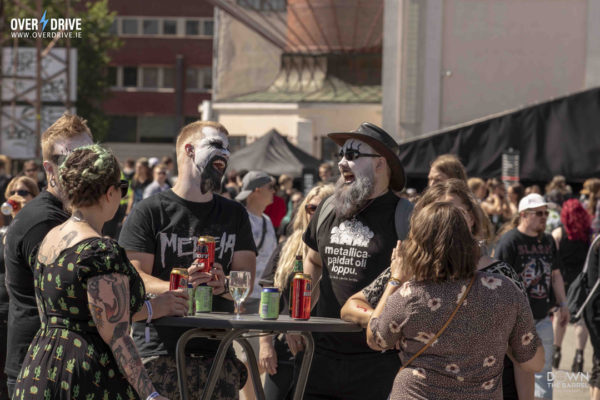 Unfortunately (this will become a theme), being in Finland, a number of the bands speak between songs in their native tongue and leaves me a little bewildered. Medeia are strong start to the day.

The first band on the Radio Rock Main Stage is Arion. These young guys seem genuinely delighted to be opening the main stage. Throughout the songs, they are pointing, smiling and making faces at friends in the audience. Lead singer Lassi Vääränen has a powerful voice but for me it’s the solos of

Iivo Kaipainen that give them a great live presence. A strong local (well they’re from Tampere) opener for Tuska. 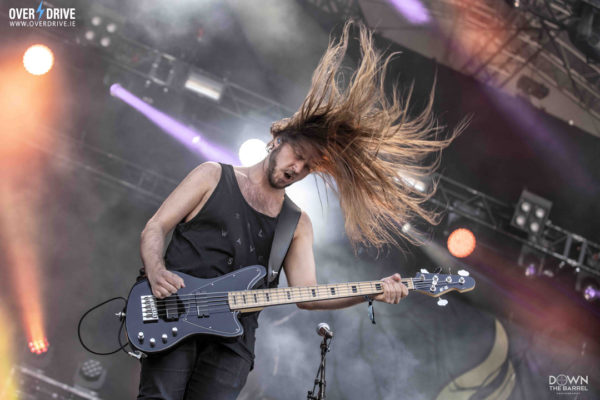 Back in the marquee, the tent is hopping for the arrival of Nightwish/Tarot bassist Marko Hietala. His debut solo album Mustan Sydämen Rovio is described by Marco as “hard prog” and I’m interested to see what the white haired wizard will play today.

Opening the set with a tuneful ballad, Marko sings in a much more gentle tone to that of his other bands and it is captivating. A few songs in he addresses the crowd in both Finnish and then he apologies to those who travelled from abroad for not singing in English. But… he then tells us that the new album will be released in English later in the year. He’s all smiles on stage and his guitarist lays down a myriad of notes over Hietala’s progressions.

At the end of the day, many are disappointed that there’s no music from his other projects but hey, he’s earned his dues and can have a little self indulgence from time to time. An interesting mix of prog balladry or to coin a phrase, ballaprog.

The first time I saw Battle Beast was at Tuska two years ago and cemented by a Bloodstock Festival Thursday headlining slot the same year, they quickly became one of my favourite new bands. 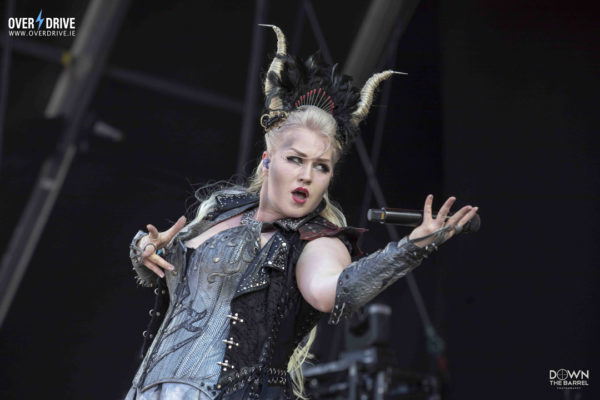 They’re back for 2019 on the strength of new album ‘No More Hollywood Endings’ and have been  let loose on the mainstage. While every band member does his best to steal the limelight, the focus always comes back to the indomitable Noora Louhimo and her flamboyant presence.

Today she is wearing a headdress that could be straight out of the Maleficent movie. Battle Beast were made to be a main stage band and they pull no punches today with all their beyond catchy songs included. Highlights include ‘Bastard Son Of Odin’, ‘Familiar Hell’ and ‘The Golden Horde’. There’s some histrionics from keyboardist Janne with a keyboard/drum machine hybrid, but it’s all in good fun and adds to the part atmosphere at Tuska. A Beast of a band in the live arena; Top Quality.

Wheel are a relatively new band on the scene, fronted by James Lascelles, from England. Do you remember Tool when they were angry young men?? Well then, you know what their sound is like. They’re on the small Inferno indoor stage today and that doesn’t prevent these hooded menaces from taking the audience through 45 minutes of haunting, progressive melodies. Top class. They really do #KeepItWheel and I urge everyone going to Bloodstock to check them out this coming August.

By now, if you haven’t heard of Power Trip, then you need a slap in the face. As far as current Thrash metal goes, these guys are kings. – Riley Gale stalks the stage like a caged panther. 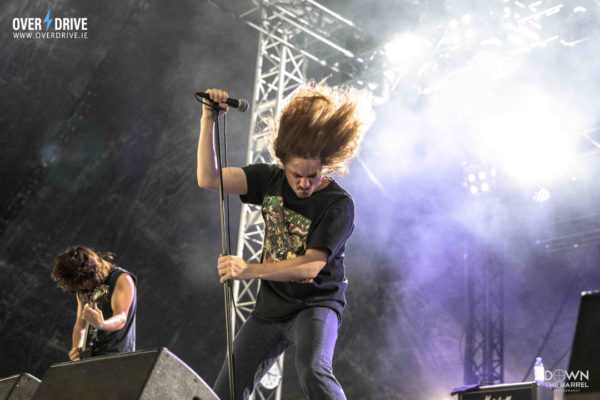 Among the highlights of their set are ‘Executioner’s Tax, Hornet’s Nest and Crucifixion’. Riley dedicates Crucifixion to a local band who are friends of Power Trip and as the song kicks in he shouts “Hey look, a fucking seagull”.

It’s a rather surreal moment as one of the native fauna has wandered into the marquee and is circling to find a way out for the remainder of the set. We are told that the circle pit today is the biggest they’ve ever had (even the seagull was participating) and the Finns seem to go at it even harder in the pit. Power Trip played the smallest stage at Tuska a few years ago and it definitely will not be long until they are high up on the bill at all major festivals. One of the bands of the day.

Anthrax tear onto the stage in blistering sun and it is as if they have picked up the thrash gauntlet thrown at their feet by Power Trip.  There’s a moment during ‘Caught In A Mosh’ where Joey looks down at me and rubs his forearm as if he’s got goosebumps. 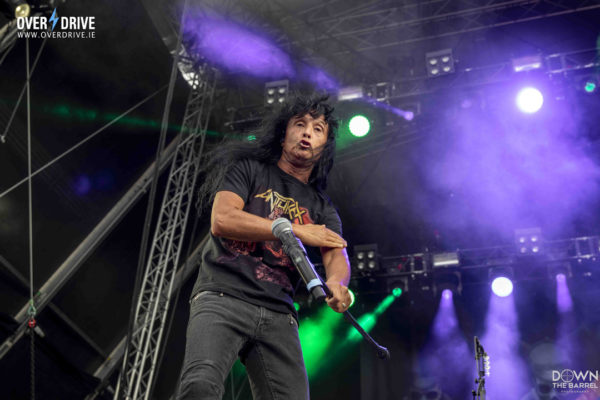 He tells the crowd that Helsinki always delivers and that sparks even more violence in the pits. There’s a level of choreography in an Anthrax show and Scott does his usual “Do You Like THRASH METALLL?” routine and does give Power Trip a shout out.

With so many tunes to choose from I really wish they’d drop at least one of the covers to let us hear some hidden gems.  That being said, Now It’s Dark and A.I.R. are included today to rapturous reception and if a crowd ever wanted a singalong at a metal festival, then ‘Antisocial’ is your only man. Closing with ‘Indians’ gives us possibly the biggest wardance of the weekend. Anthrax went toe to toe with Power Trip today and i’ll leave it to a judges decision on the scorecards. It’s frantic, it’s fierce and it’s great fucking Friday fun. 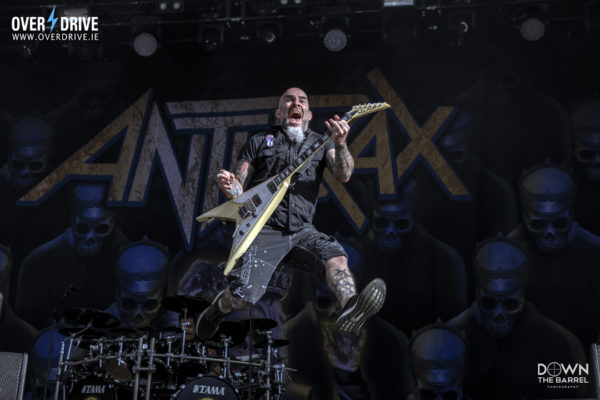 Anneke Van Giersbergen is a bonafide legend in heavy metal circles. Today she’s pulling a double shift, guesting with headliners Amorphis, but it’s her solo shows that she is in her element. The Inferno room is the most packed I’ve ever seen it and Anneke is genuinely surprised with the reception. ‘Valley of the Kings’ is sublime and it kills me to have to leave to go photograph the mainstage. I wait for one more song and Anneke covers the magnificent ‘Who Wants To Live Forever’. 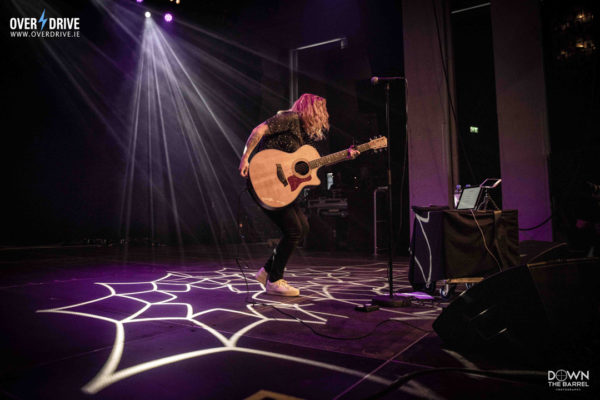 The woman is a hero and can do no wrong. If anything, her solo performance has added even more expectation to the Amorphis set.

It’s gotta be hell for  a hooded Shagrath and the boys of Dimmu Borgir as they take to the stage in the searing evening sunshine. If anything, I can only hope that white corpse paint is the best reflective deterrent for sunburn.

With an opening salvo of ‘The Unveiling’, ‘Interdimensional Summit’ and ‘The Chosen Legacy’ it’s clear that they ain’t fucking about today. 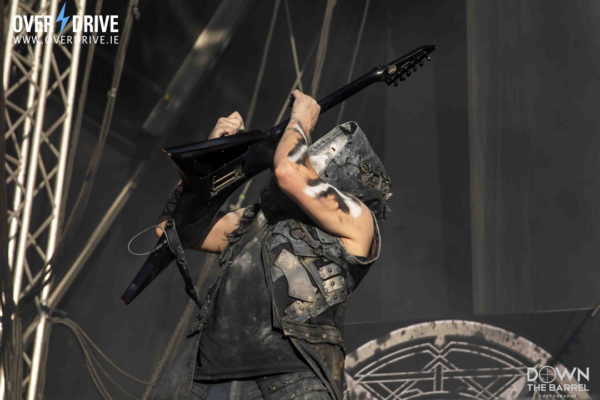 Galder is all smiles on the left side of the stage and for all the theatrics and pageantry, it’s clear that Dimmu is a band who love doing what they do. Shagrath asks; “Finland, are you ready for some Norweigan Black Metal?” and from the roar, the Finns definitely are.

It’s a great set with their anthemic eponymous song getting heads banging all over the arena. During ‘Progenies of the Great Apocalypse’ two massive torches on the stage erupt with flames. It’s perfect and adds to the visual and amplifies the musical intensity. Dimmu are on top form and they finish up as kings of the north once again.

I can only catch the opening song of Swallow The Sun’s set but I am delighted that they open with ‘When A Shadow Is Forced Into The Light’ from this year’s release and it is hauntingly beautiful. Cascaded in a wash of backlights, STS is a band that slowly intertwines their melodies around the astounding vocals of Mikko Kotamäki. Their mix of Paradise Lost, My Dying Bride and Type O Negative is adored by their home following and I’ll be putting them top of my list to see at Bloodstock. 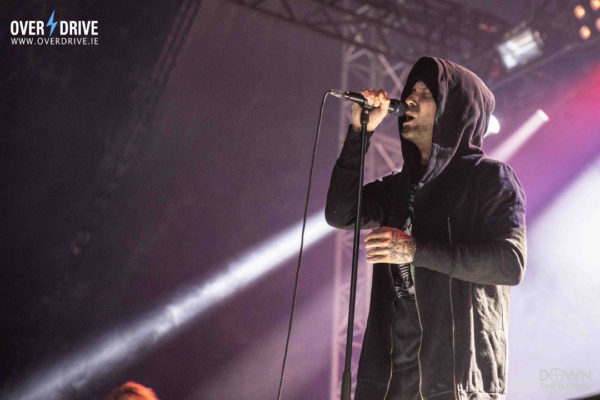 It’s always great to see Amorphis in their native land. I’ve seen them twice before and they’ve played sets that celebrated their past and I was wondering on the plane to Finland, what kind of set they would perform this weekend.

The band are hailed as heroes before the first note is struck and you know that tonight is going to be electric. The arena is the most packed I’ve ever seen it (changes in the layout have helped this) and they are in full voice for the native metallians.

The band opens with ‘The Bee’ and takes us on a journey with them through the ‘Queen Of Time’ album in its entirety. There’s a rather strange moment when figure wanders on stage dressed in an animal pelt and waves a giant flag during ‘Daughter Of Hate’ but it only adds to the mystical nature of the performance. 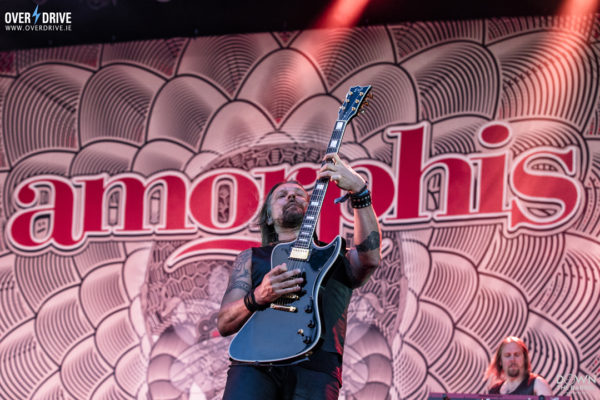 Anneke Van Giersbergen joins them for a stunning ‘Amongst Stars’ and the chemistry between her and Tomi is a sight to behold. It’s nights like this that I wish I understood Finnish because the audience is hanging on every word from Joutsen.

It’s a spellbinding performance from one of the most original metal bands on the planet.  Personally, I adore the guitar sound that Esa Holopainen uses and it works perfectly with the almost oriental rhythms from Tomi Koivusaari. 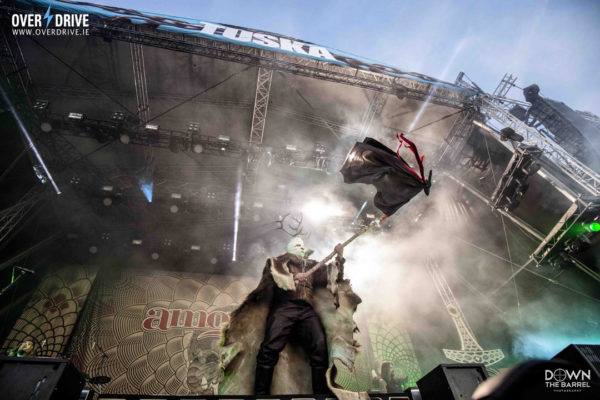 The band encore includes another guest appearance from Anneke on ‘Her Alone’. They close with a tonne of pyrotechnics for ‘The Smoke’ and a nostalgic ‘Black Winter Day’. To answer my original musings; Amorphis deliver a set that celebrated the band as the band they are now, without the need to placate the “old school”. Amorphis have always played by their own rules and at Tuska 2019, they ruled supreme.

Photos – Down The Barrel Photography.