With just a matter of days before the Irish capital becomes a cesspool of vomit and urine thanks to the dreaded St Patricks Day celebrations, Portland’s very own UNTO OTHERS graced us with a celebration of their own…. 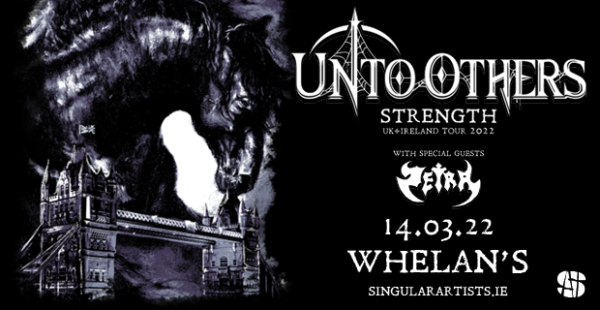 As the rush hour traffic carves its way through the busy streets, the dark corners of Whelans are illuminated with the presence of Unto Others, who tonight, made their highly-anticipated debut in Dublin.

With two stellar albums under their belts [‘Mana‘, 2019 and ‘Strength’ 2021], previous tours with King Diamond, rave reviews across the board, and an upcoming EU/UK tour this coming Autumn with Behemoth and Arch Enemy, there’s no question that UNTO OTHERS are destined for great things.

Opening the show tonight is London-based Gothic/Metallic Shoegaze duo, ZETRA who appear on, what looks like, the set of a cheap apocalyptic movie set, donned with black cloak-like attire, corpse paint, and old-school studded leather trinkets.

At first it’s hard to make out what ZETRA are all about, as the overall image and sound of the band seems disjointed, but everything soon slots into place. Dreamy soundscape vibrations make way for raspy guitars and angelic vocals, as cascading riffs plunge to low-end depths, before evaporating like seafront mist.

As captivating as Zetra are, there is a very clever concept behind this duo. Imagine a hazy Summers day with a sharp winter breeze, and you’ll be somewhere in the mindset of their creativity. Although I didn’t really know what to expect, I can confidently say, they are a much more engaging experience live, compared to what I had heard from their recorded discography. Either way, Zetra are a band that very much deserves your time. 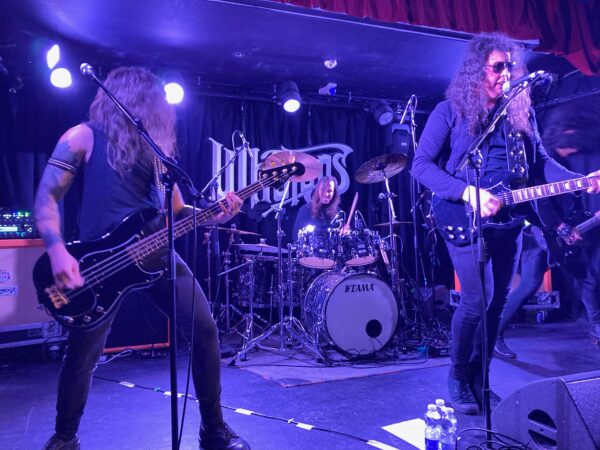 As the audience casually shuffle towards the lip of the stage, the four members of UNTO OTHERS take their place and [without pomp and circumstance] launch into ‘Heroin‘, followed by ‘Give Me To The Night‘ and ‘No Children Laughing Now‘.

Frontman Gabriel Franco, [dressed head-to-toe in black, with aviator shades], cuts a enigmatic figure, almost like a dubious villain from an ’80s video nasty movie, as he and his bandmates punch holes in the atmosphere.

Sebastian Silva and Franco’s duel guitar assault is littered throughout tonights set, with almost every track being a highlight. ‘Nightfall‘, is followed by ‘Downtown‘, ‘Summer Lightning‘ and ‘Jackie‘, before a short intermission is followed by lead single, ‘When Will Gods Work Be Done‘ [taken from new album ‘Strength‘], to which they perform with equal measures of grit and aggression, and it’s as powerful as one could hope for.

In fact, Unto Others sound truly immense in a live setting. Their pulsing guitar tones,  Gothic-tinged vocals, and low-end chugging bass lines from Brandon Hill, gives way to some sturdy and impressive drumming from Colin Vranizan, resulting in one hell of a solid live band. 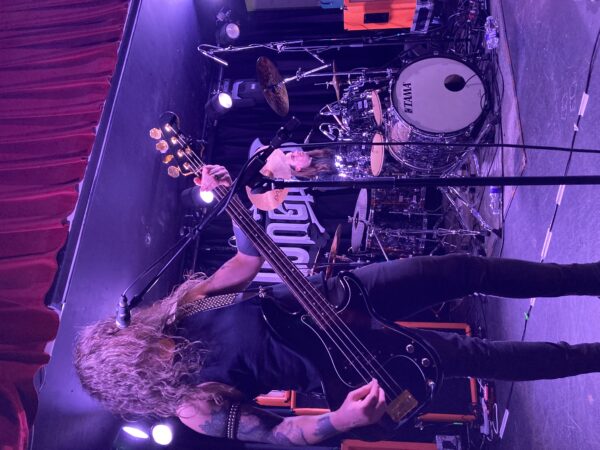 If you have the opportunity to catch UNTO OTHERS on this intimate tour, then my advice is DO IT without hesitation. Their ability to pen and perform music that literally sounds like no one else, is something that is very rare indeed.

UNTO OTHERS will return to EU/UK this Autumn as guests along side Carcass for Behemoth and Arch Enemy. Tickets are on sale NOW via this link.

‘Strength‘ is out now and can be picked up here. Catch UNTO OTHERS on tour via the dates listed below.