There are few bands within the universal sphere of Metal/Extreme music that struck a dent so deep when it comes to pushing boundaries and reinventing the very definition of “heavy’. Voivod are one of those bands… 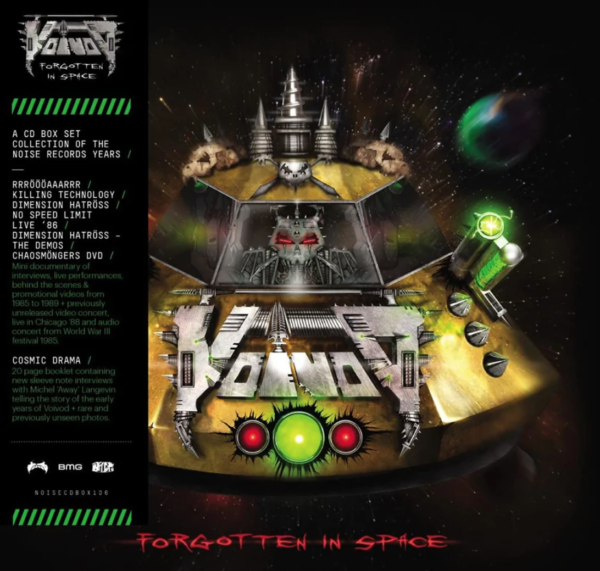 Noise Records / BMG have once again nailed it when it comes to compiling a treasure trove of glorious high-quality vinyl, twinned with flawless packaging and extra collectable trinkets that will get any vinyl fanatic hot under the collar.

‘Forgotten in Space‘ features five pressings from Canada’s premiere technical/avant-garde Metal outfit. Never ones to follow the herd, this Voïvod box is pretty much a glorious time capsule that catches true essence of the bands’ brillance, as well as their fearless journey into murky waters of extreme, experimental music.

Housed in a hard ‘flip lid‘ box in a striking variety of explosive colours, ‘Rrröööaaarrr‘ [1986] opens the ceremony with a selection of bangers packed with Voïvod’s aggressive, apocalyptic noise that bursts into the either with snarling vitriol. Pressed on  striking red and black splatter vinyl, this remastered version sets the bar extremely high for what lays ahead [if you happen to listen in chronological order].

A glorious green and purple swirl is the uniform for ‘Killing Technology‘ which, once again, follows suite with the full, bombastic remaster. The 1987 release is loaded with the bands’ signature sound as the real evolution of their dissonant structure takes form.

Considering the jump in sound and evolution from their ’84 debut, ‘War and Pain‘, ‘Killing...’ is where the band’s most defining period took hold. Packed with progressive proto-industrial noise, the pathway to a more ‘fleshed out‘ concept was beginning to become more transparent.

That pathway led to 1988’s ‘Dimension Hatröss‘ – a stone-cold classic by any standards. Dominated by the unusual, ‘free falling’ unpredictability with time-signatures, melodic twists and turns that were as unusual as they were captivating.

The album comes with shining moments, such as, ‘Experiment‘ and ‘Tribal Convictions‘ which just lift off the wax on this remaster. Clarity and depth are enhaced, reminding us that ‘Dimension...’ truly is a statement from the Canadian natives. 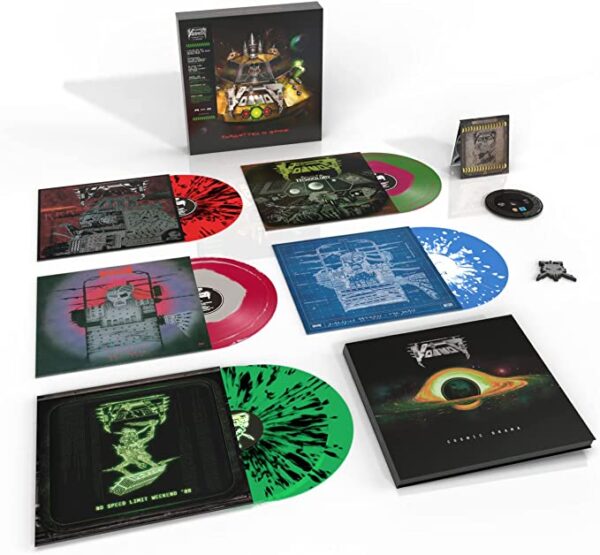 ‘Forgotten in Space‘ offers a first also, with ‘No Speed Limit Weekend‘ live disc from ’86. Presented on double green and black splatter vinyl, the track listing includes, ‘Ripping Headaches‘, ‘Fuck Off and Die‘, ‘Nuclear War‘, ‘The Helldriver‘, and ‘Thrashing Rage‘, which are scattered among this 14-track recording. Absolute quality!

Completing the vinyl is another first, with ‘Dimension Hatröss – The Demos’ [white and blue splatter] and albeit filled with some pretty raw versions of the tracks, this release shows the consistency of the tracks from their origin to when they were recorded for the album and is a must for any true Voïvod fans.

Also included on this vinyl version box set is a USB stick including all the music and videos listed above plus Cosmic Drama, a forty page booklet full of previously unseen photos and new sleeve notes from Away.

All-in-all, ‘Forgotten in Space‘ is a tremendous box set, loaded with the true intensity and importance that made Voïvod who they are today. The presentation is top notch and displays genuine care and attention to detail from the good folk over at Noise BMG.
With that being said, it’s top marks from us! 5/5

Order your copy via this link.

Check out our unboxing video below: