REVIEW : WARPATH – ‘THE AMBIANCE OF WAR’ 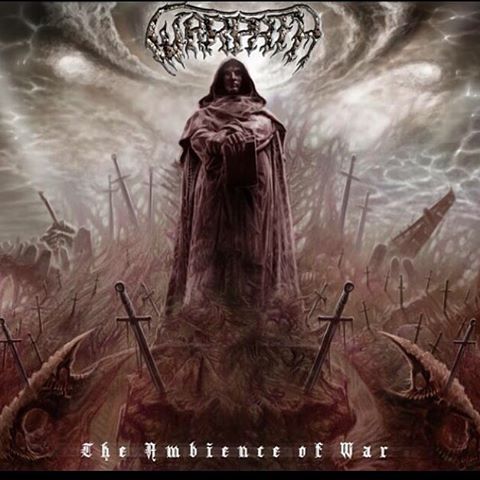 Taking an unmistakable step back from some of the more predictable themes of gore and mutilation typically associated with Death Metal, The Ambience of War provokes more aesthetically interesting and stimulating imagery throughout. Instead of the somewhat exhausted themes of death metal, listeners can expect the complexity of conflict, hostility and warfare to permeate through the tracks. While a severance from established patterns may cause panic and confusion, please be assured that Warpath has not compromised on the fundamentals of their own recognisable style, they have simply enhanced it.

From the very first track ‘Upon His Return’, you will be pulled face first into the trenches of  The Ambience of War. The opener is immediately engaging and captures your attention right off the bat. There is enough diversity and variety to hold your interest at all times. A prominent groove saturates through all the tracks, complementing the aggressive delivery, and making for a palatable and captivating opener.

The second track ‘Shackled to the Chains of Command’, is an immediate contender for the favourite, all objectivity is gone out the window quicker than John Terry in Wayne Bridges gaff.  Shackled continues to illustrate Warpath’s impenetrable force. There is a lot on offer here in the way of style. Again, plenty of style variations to keep you on the hook, while sometimes stylistic methods are subtle in nature, they are still effective. The sinister sentiment, paired with soaring guitars breaks up ‘Shackled’ nicely. The speed and ferocity of delivery reinforces and upholds the vocals and cocoons the track with a provocative sense of urgency like a battalion pushing forcefully across aural plains.

Thrive on Carnage has a distinctly different feel to it. It’s moodier and darker, delivered with a thud. The guitar style is something to look forward to on this one. ‘Thrive on Carnage’ is another demonstration of Warpath’s musical diversity. There is a good groove throughout which boosts the appeal of ‘Thrive on Carnage’.

Next up is Infectors which immediately qualifies as another contender for favourite track. Infectors incorporates the essential elements of any decent death metal track – drumming similar to the sound of a hail of bullets, speed, aggression and sheer heaviness. The guitars have quite a somber, dark tone in some parts which, juxtaposed with the other components of track, creates an interesting volatility. Infectors continues to throw out the aurally unexpected.

Finally, we come to Hunted like the Prey that You Are, which features guest vocals from Mark Koeppel of Misery Index (yeeow!). Straight off the bat, Hunted forges a strong sense of impending doom and darkness. The title alone taps into a very primal compulsion, which aids the in the creation of an atmosphere of dread and foreboding.  It probably goes without saying that Hunted is very strong vocally. The variation in vocal style lacerate through the track and breaks up the speed and ferocity of Hunted nicely. Any threat of monotony is crushed before the thought of it can fully form in your mind. Hunted is really a perfect finisher to a really great e.p.

I really enjoyed The Ambience of War and can honestly say that there is a lot on offer here, even for the fans of metal who would not necessarily lean towards the death metal genre in general. While it is ultimately death metal at heart, it is still accessible enough to be appealing to a wide audience, and heavy and complex enough to satisfy the hardened fans of the Death Metal genre. I highly recommend you check out The Ambience of War because you will not be disappointed. 4/5

For more information on Warpath, click on this link.