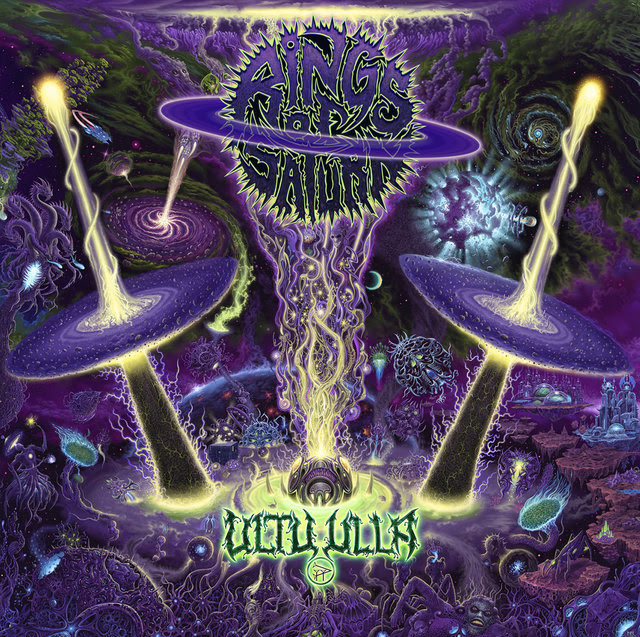 The alien deathcore quartet presents an entirely new and esoteric proposition to heavy metal. Today, the band released the second single, “Parallel Shift“. Check out the lyric video created by Scott Rudd at Rudd Film’s below;

Lucas Mann comments, “I’m really excited about the lyric video for our new song, ‘Parallel Shift’, made by Scott Rudd. He is very talented with his videos and I love his animation work. I feel it brings our crazy album art to life.”

You can now pre-order the album here.

The hallucination inducing cover artwork was completed once again by Mark Cooper of Mind Rape Art. Made-up of a 3-piece painting that continues the story from the 2-piece artwork from Lugal Ki Em. Cooper fuses the band’s musical and conceptual ideas forming a piece of art that embodies the complexity of the bands music.

Mark Cooper comments, “The general idea was to create a scene where gods from beyond time and space are invading 3D-reality and taking over. They are chaotic beings that can take any form at will and manifest anything with their imaginations.”

The guitars, bass, and synth tracks for Ultu Ulla were completed at Mann Studios. The drums and vocals were recorded in Florida at Krikbride Studios. Mixing, mastering, and production was completed by Studio 344 in Pittsburgh, PA.

Below is the track listing:
1. Servant of this Sentience
2. Parallel Shift
3. Unhallowed
4. Immemorial Essence
5. The Relic
6. Margidda
7. Harvest
8. The Macrocosm
9. Prognosis Confirmed
10. Inadequate

Formed in 2009 as a studio project, California-based RINGS OF SATURN is the brainchild of Lucas Mann. The band self-released their first full-length album entitled Embryonic Anomaly in late 2009 and was re-released internationally on May 28, 2010. Since then, RINGS OF SATURN have been hard at work touring nationally throughout the United States and Canada promoting Dingir (2012) as well as their latest album release entitled »Lugal Ki En« which was released October 2014.

With the release of Lugal Ki En, RINGS OF SATURN branched out touring including a US tour with AS BLOOD RUNS BLACK at the end of 2014, an appearance at the 2015 edition of Knotfest, a US Tour with THE FACELESS in 2015 and their first and very successful European Tour early 2016 with AVERSION’S CROWN. 2016 will see the band embark on another North American tour before heading back into the studio to record their 4th full-length album which will be released on Nuclear Blast.