Knotfest Mexico devolved into a riot on yesterday when Slipknot and Evanescence were forced to cancel their sets.

A broken barricade at the Mexico City fest was blamed for the cancellation, leading fans to torch Evanescence’s drum set and wreak havoc on both band’s equipment.

The lineup for Knotfest Mexico also included Godsmack, Bullet for My Valentine, Papa Roach, and many more acts.

While most of the bands were able to perform, the barricade reportedly was pushed down during Behemoth’s set.

Apparently, organisers were unable to fix the barricade, and had to cancel the Evanescence and Slipknot sets over safety concerns. 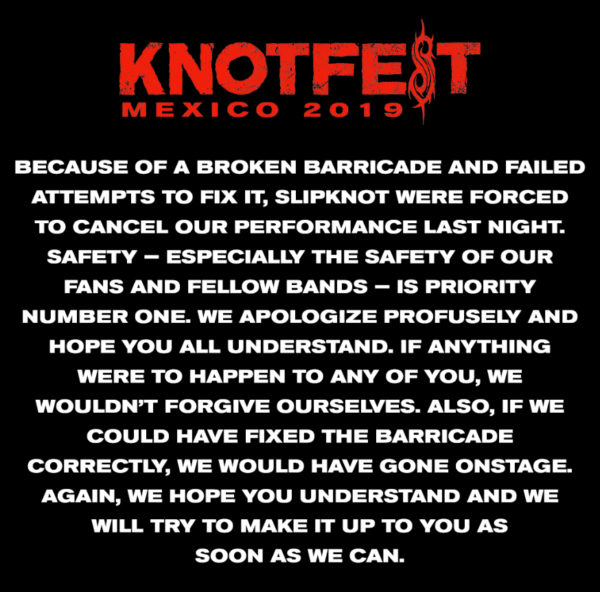 News of the cancellations spread fast, with #Knotfest trending on Twitter, due to the reaction by some fans at the festival, who stormed the stage and destroyed equipment, including Evanescence’s gear.

Video footage of a drum set on fire — reportedly, Evanescence drummer Will Hunt’s kit — went viral. “It literally breaks my heart to see @evanescence equipment being destroyed at #knotfest. To the people who went on to destroy their equipment, you’re a bunch of cowards. Malditos perros!,” tweeted one fan, while another attendee eloquently added, “This doesn’t represent metalheads nor mexicans. Only fucking morons that can’t behave properly.”

Upon hearing the cancellation announcement, fans stormed the stage, damaging Evanescence and Slipknot’s equipment, which had already been set up in anticipation of the bands’ performances.

Video shows the wild scene, with thousands of fans rushing through the grounds, with a few of them lighting Evanescence’s drum set up in flames.

We are heartbroken we didn’t get to play for you tonight, México City. Your safety, your life is more important than any show! We love you and we will be back soon, that’s a promise. 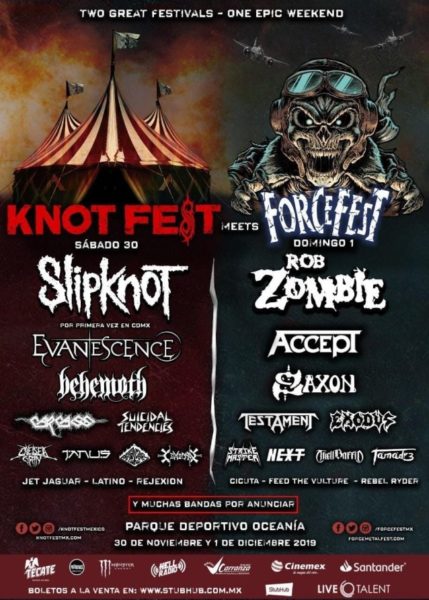