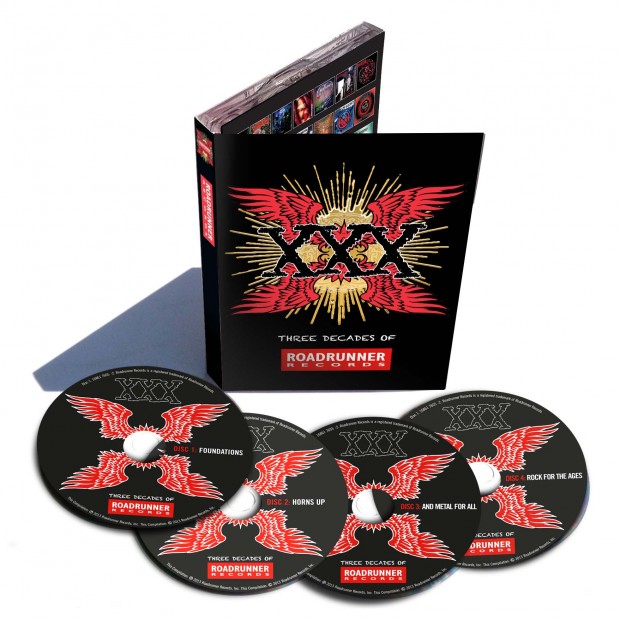 It only feels like yesterday that Roadrunner released that fine selection of box sets from the likes of Sepultura, Type O Negative, King Diamond etc. Well they label is now at it again with the release of a treasure trove of classics in the form of a kick ass box set.

The release of the box-set see’s the label celebrate its three-decades-plus legacy as one of the most highly regarded labels in heavy metal and hard rock history, and what better way to do so by releasing a four-CD boxed set covering a broad spectrum of heavy music with tracks from dozens of the world’s most legendary artists.

XXX: Three Decades of Roadrunner Records delivers a blistering overview of the label’s formidable first three decades of existence spread across four carefully assembled CDs. The first disc, “Foundations,” highlights the labels early, reputation-building years with ultra-heavy tracks by Mercyful Fate, Carnivore, Deicide, Brujeria, Suffocation, Biohazard, Type O Negative and more. The second disc, “Horns Up,” sums up Roadrunner’s indelible impact on the metal scene of the 1990s with moshpit-detonating anthems from Slipknot, Machine Head, Sepultura, Coal Chamber, Fear Factory, and many others. The third disc, “And Metal For All,” brings the listener into the 2000s and up to the present with the pounding sounds of Killswitch Engage, Trivium, Dream Theater, Opeth, Gojira as well as a track from 2005’s “all-star” Roadrunner United album. The final disc, “Rock For The Ages,” focuses on Roadrunner’s hard rock contingent with tracks from mainstays such as Rush, Nickelback, Lynyrd Skynyrd, Theory Of A Deadman, Airbourne, Black Stone Cherry, and Korn featuring Skrillex, among others.

A documentation of not just Roadrunner’s history but metal itself- this four disc set is testimony to the fact that as metal and heavy rock have morphed and changed over the years, Roadrunner was always, and continues to be, at the epicenter.

Originally founded in 1980 in the Netherlands, Roadrunner Records earned its place as one of the most prominent international independent record labels.  Established primarily as a hard rock label, Roadrunner, a member of the Warner Music Group family of labels, now boasts depth and variety in its artists.  The label has experienced unprecedented success with multi-platinum artists Nickelback and Slipknot, platinum Theory of a Deadman, gold-certified Stone Sour and Killswitch Engage, as well as modern heavy hitters Dream Theater, Trivium, critically acclaimed Gojira and the legendary Rush.  Roadrunner’s current roster includes exciting alternative/pop up and comers Young the Giant and other diverse rock acts such as Airbourne, The Amity Affliction and Black Stone Cherry. Roadrunner catalog includes now-classic albums from seminal artists such as Type O Negative, Sepultura and King Diamond.

Disc 4- ROCK FOR THE AGES