ROCK FOR CHOICE – BLISTERING LINE UP TO TAKE OVER DUBLIN’S GRAND SOCIAL ON JULY 29TH!


A brand new music festival is being launched in Dublin and is taking place on July 29th at The Grand Social. Rock For Choice is packed to the brim with an outstanding display of Irish metal and alternative rising artists. 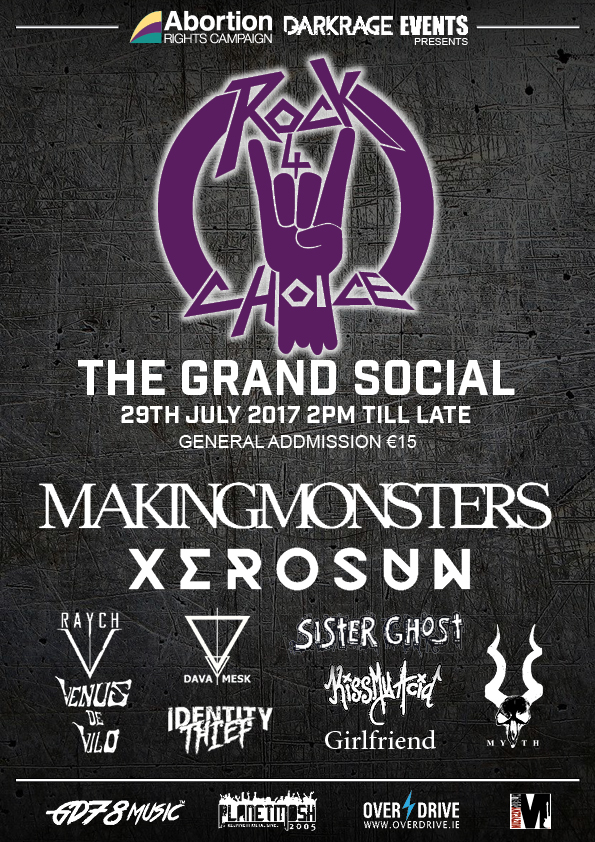 Rock 4 Choice was originally a series of benefit concerts held over the ten-year period between 1991 to 2001 in the United States, and the line-up included many notable artists such as Joan Jett, Soundgarden and Nirvana. Rock 4 Choice Ireland will continue this fantastic legacy, building a platform for musicians to voice their support for women’s rights and literally scream their lungs out to ‘Repeal the 8th!’.

All proceeds from this event will go to the Abortion Rights Campaign, which is entirely run by volunteers.

Festival organiser, Martyna Halas-Yeates, says: “In the 1st edition of R4C, we bring you a lineup consisting of female fronted bands as well as solo artists across rock, punk, metal – even ambient! – to appeal to all tastes. With this theme, we wish to reinforce the message that women should be trusted to choose for themselves, and have full autonomy over their bodies. We also want to showcase the immense talent we have here in Ireland, as rock and metal scenes are still very male-dominated. Joining forces with us are some fantastic guests from Northern Ireland including Making Monsters who are headlining the event. Music can be such a powerful carrier for change, so I hope many will join us, enjoy a full day of music, mosh for choice and help us make a difference.”
Tickets are 15 EUR and are available via Eventbrite here. 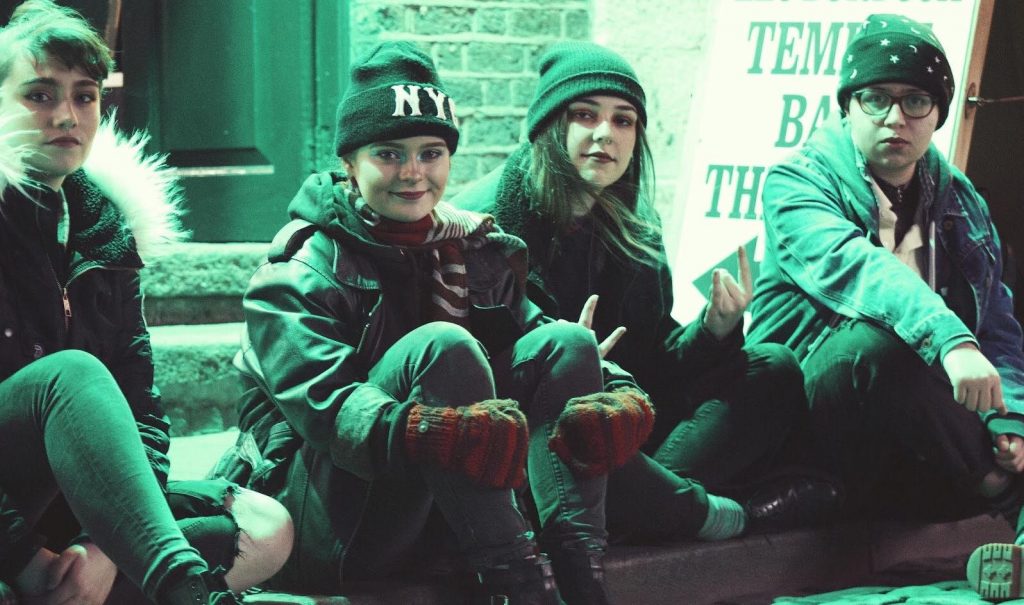 Opening the day are Dublin’s alt rockers Girlfriend. The band self-described as music for people who are into “crying in forests at night, punching walls and still getting tucked in by your mum”. Their debut EP “3 AM rituals” has received some favourable reviews from publications such as The Thin Air, District Magazine and Uncovered IRL and they have been compared to Sonic Youth, Modest Mouse, Slint & The Smiths.

Drawing from the tradition of the American indie scene, the band has been gigging relentlessly across Ireland and are no strangers to spots like the Roisin Dubh, Bello Bar and The Grand Social. 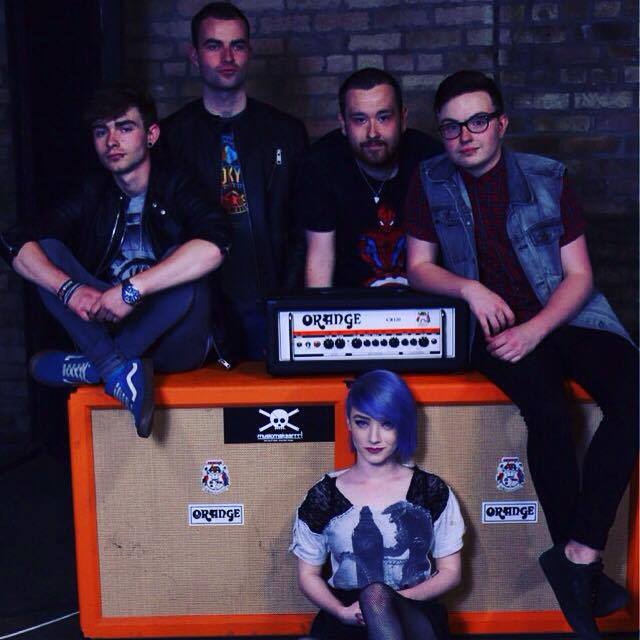 This five-piece Irish band are quickly becoming known for their catchy hybrid of pop punk and post rock. Praised for their highly energetic live performances, the group have shared stages with acts such as Ryan Sheridan, Picture This, Hermitage Green, ROAM and Crazy Town. Their recent single “Me Against The World” has received favourable reviews and gained national airplay on Dan Hegarty’s The Alternative on 2FM. Identity Thief are currently finishing their new EP “What Happens Next” and their sound will appeal to the fans of bands such as And So I Watch You From Afar, Brand New, Paramore, Twin Atlantic or Blink 182. 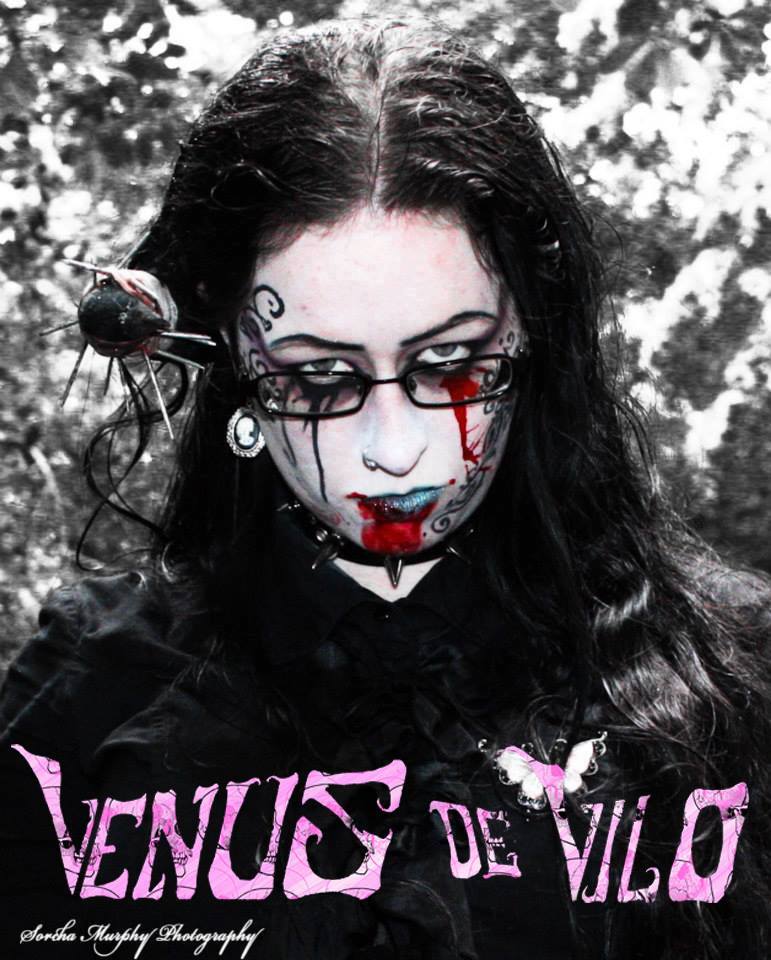 The Voice of Horror: Venus de Vilo is a theatrical Irish musician specialising in the vaudeville, macabre and bloody side of dark horror music. An internationally published and acclaimed comic book artist and gothic-horror illustrator, Venus has recently been signed to a German Horror Punk record label “Undead Artists”. Venus is going on her first European tour with the label in October 2017. Vile mother of three EPs, a Frightmas album, three rotten rhymes poetry albums and one thirteen track musical monstrosity, Venus is currently working on a twenty-six track deluxe double album entitled “Cadaverotica”. If you like your humour black, and your live shows bloody then Venus de Vilo is the glitter-encrusted weirdo for you! 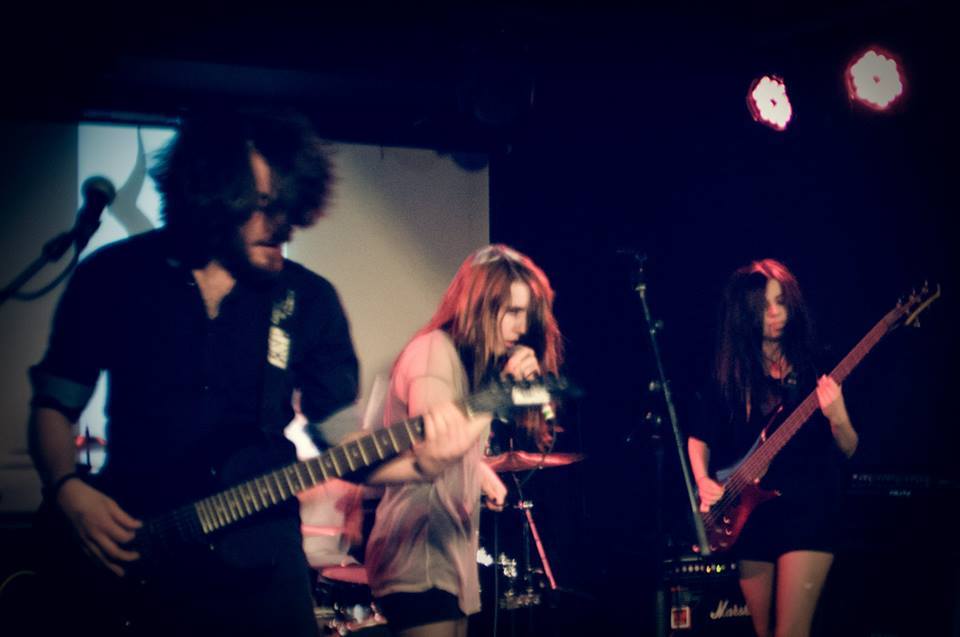 MYTH are a four-piece alternative rock band from Dublin. Their music consists of low-end rhythmic harmonies, fat back beats and haunting vocal melodies. They are just off the back of releasing their debut single IDIOTS/SAVAGES which is now available on Spotify & I-tunes. The single release was accompanied with a sold out show in The Workman’s Club & for their next gig on July 29th in the Grand Social they promise to provide a hard hitting performance. 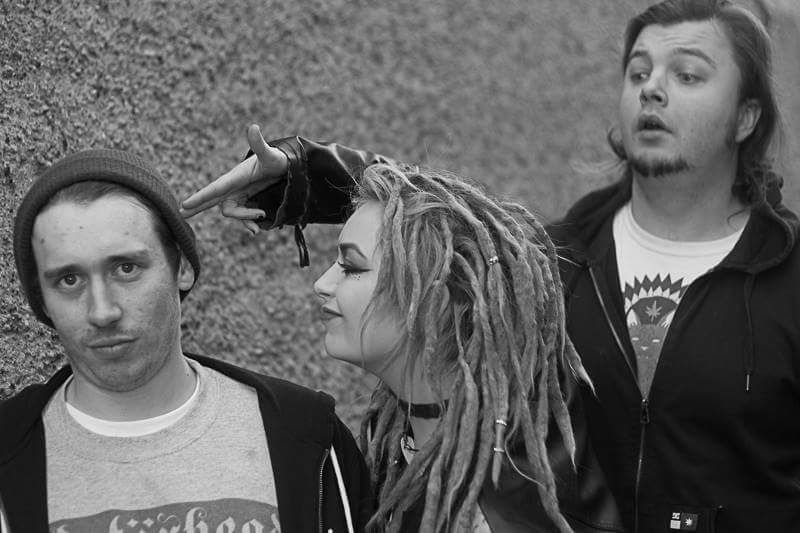 Kiss My Acid are a loud and snotty, three piece, girl fronted punk band from Ireland. Formed in June 2015, and already having released their debut EP entitled “Individuality”, they continue to make a name for themselves among the Irish punk scene and music industry. With two-minute power chord bursts of pure anger, frustration and snotty lyrics, Kiss My Acid certainly know how to rip it up. Having just toured the UK promoting their newest release “Fundamentally Ill”, they will sure stir up a mosh at the Grand Social this July 29th!
SISTER GHOST 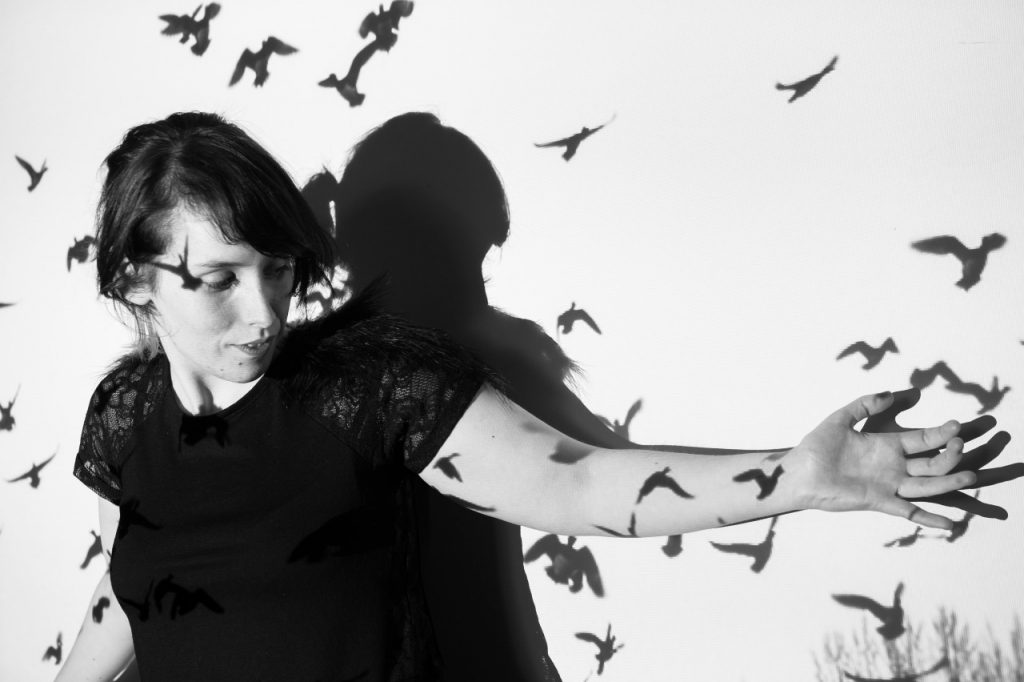 Sister Ghost, aka Shannon Delores O’Neill, has a background playing in bands from a young age but after she found herself without one, she saw it as an opportunity to do things her way. She began writing and demoing – singing and playing everything herself – before forming a full band to bring the project to completion. The Co.Derry native marshals a diverse set of influences in a singular way – from Seattle punks The Gits and her guitar hero, Sonic Youth’s Lee Ranaldo, to Kate Bush and Thin Lizzy. It’s noisy, spectral art-rock with a pop heart. Sister Ghost released her debut EP ‘In a Spell’ in October 2016 along with an Irish tour, during which the band supported Mexican/USA band Le Butcherettes. 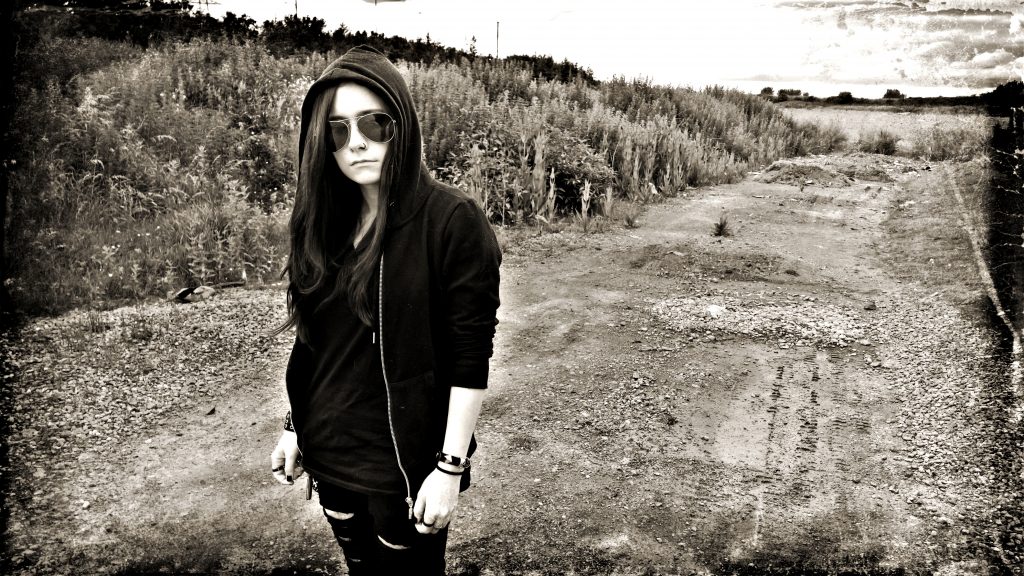 Raych V is an Irish Dark Ambient/Atmospheric/Sound Art composer based in Southern Ireland. Having played with bands such as Aeternum Vale (who supported Behemoth & 1349) and Trayus, Raych V has since taken a different route musically, combining the construct of sound design, and musical composition. In the space of 18 months, Raych V has released 4 albums, been played several times on RTE’s Lyric FM, along with being one of three female composers presented at an exhibition at ‘Composing the Ireland’, during an interval in the National Concert Hall. 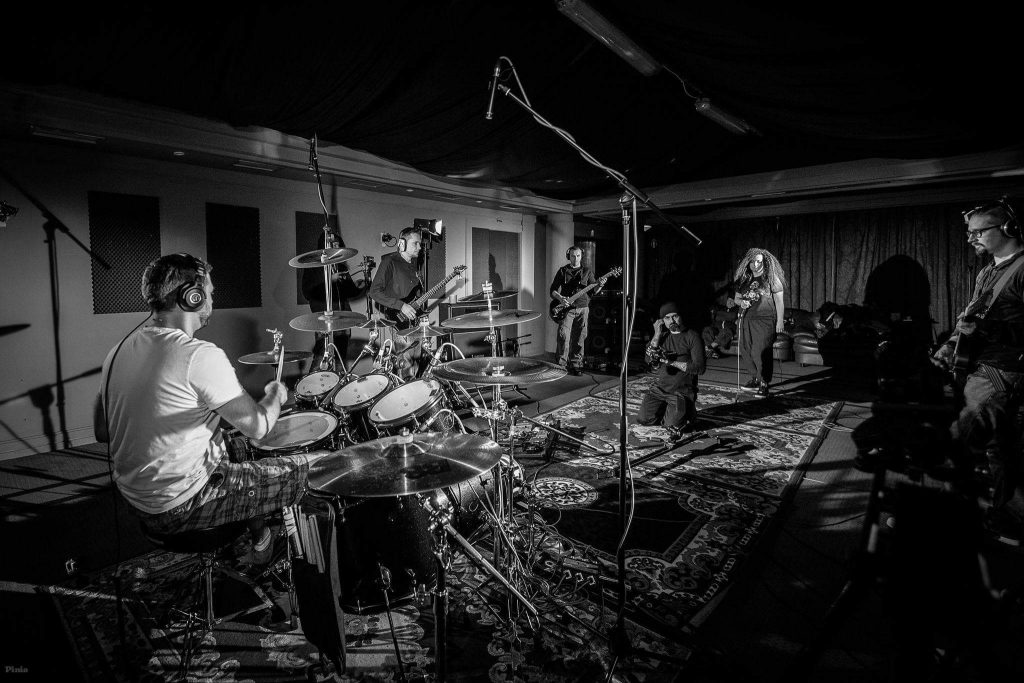 Davamesk is a Dublin based, Polish-born five piece band whose music can be described as heavy/core/progressive/metal. The band members are known from a variety of other studio and live projects, most notable of whom include Thy Worshiper, Joyful Noiz, Hibernia and more. The band have recently finished working on their first demo, which has been recorded and produced at Soundahead Production studios, and mixed and mastered at TrackMix Recording Studio.  Davamesk are now busy rehearsing and are planning to gig relentlessly across Ireland and beyond.
XEROSUN 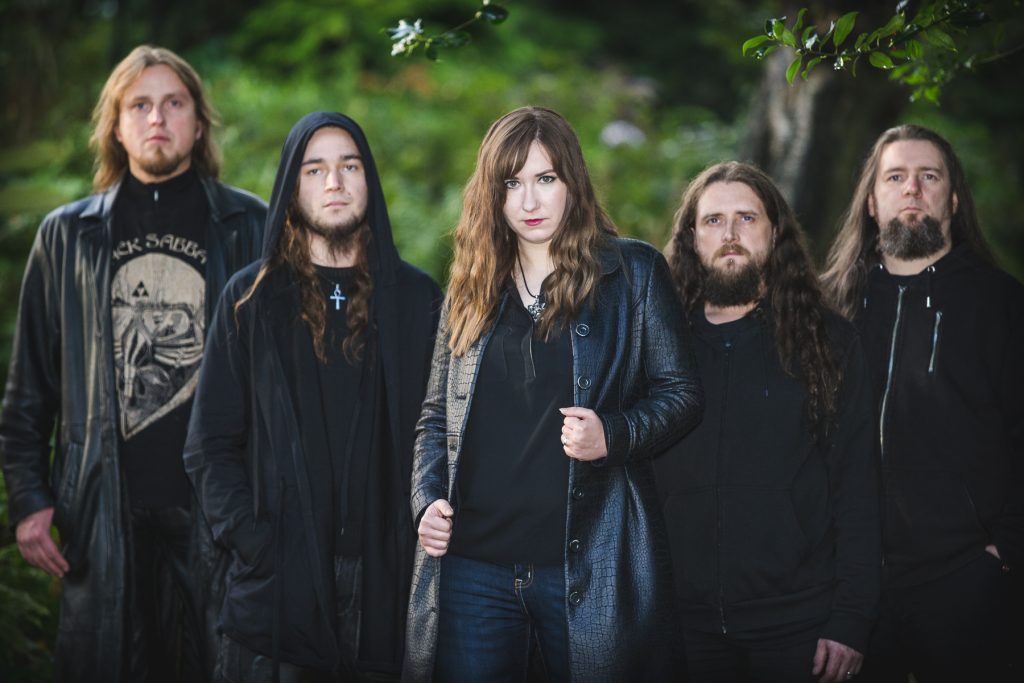 Xerosun are a Dublin based melodic death metal band with a prog twist. Taking their influence from Bloodbath through Sybreed to Scar Symmetry, the five piece have recently released their EP “This Dark Rage” accompanied by the award winning video by Olga Kuzmenko. Having shared the stage with bands such as Avenged Sevenfold and Xerath, they are set to support Jinjer this November at their Dublin show. Xerosun have recently joined forces with producer Kris Norris known from his collaboration with Scar the Martyr, Darkest Hour, Threat Signal and more, and are working on their next release, as well as preparing for their upcoming live shows across UK and Europe.
MAKING MONSTERS 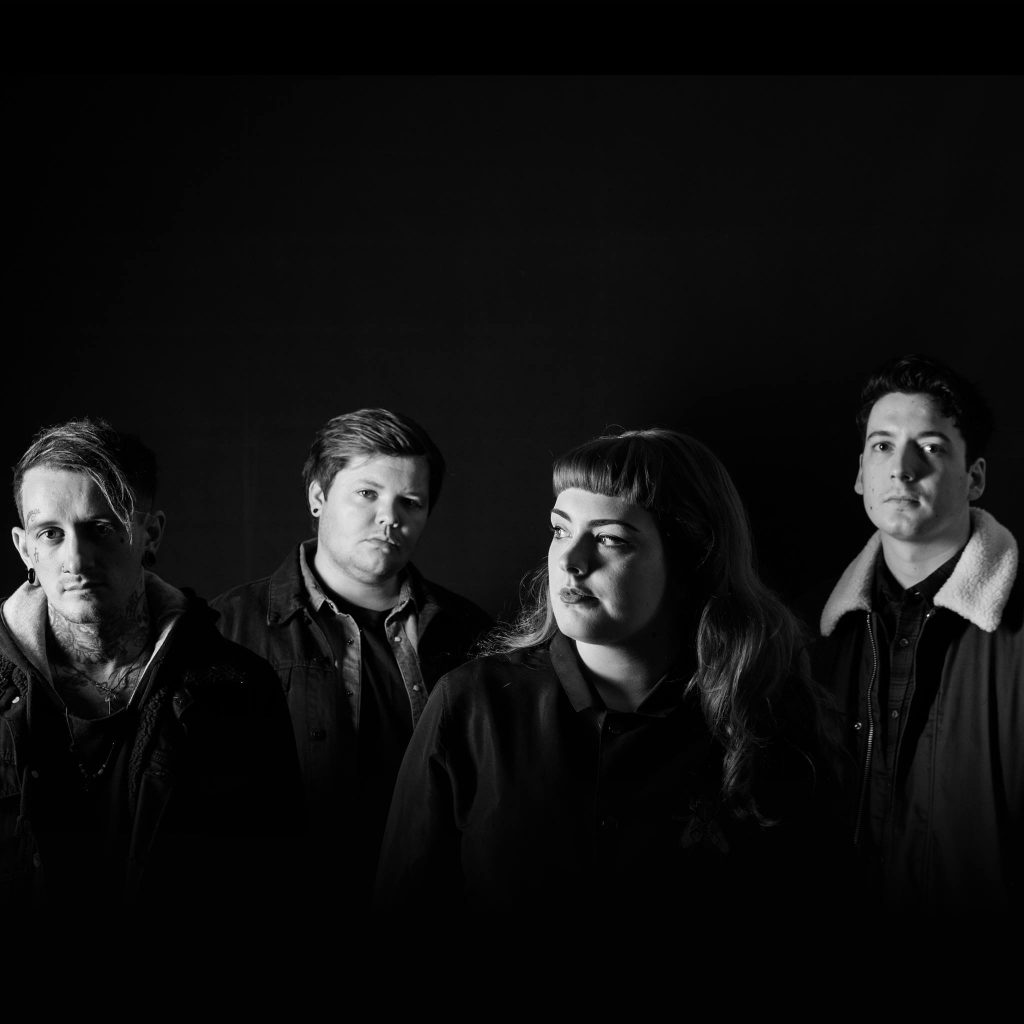 2016 saw the band complete a headline Irish tour in support of their latest EP ‘Bad Blood’ and performances at Camden Rocks Festival in London, and a performance on the BBC Introducing Stage at T in The Park.

Their debut single ‘Better’ picked up spins from Daniel P Carter and Phil Taggart at BBCR1 and was subsequently picked as BBC Introducing tip of the week and played on almost all 36 local BBC radio shows, as well as on Tom Robinson’s BBC 6 Music show. The track entered the Kerrang! charts at #14 and the video was added to the main playlists for both Kerrang! TV and Scuzz TV.

They are currently putting the finishing touches to their debut album, which is due for release early 2018. You can catch them live this summer performing at 2000 Trees, Wildfire Festival, Fort Fest and Rock 4 Choice Ireland!