FEATURE INTERVIEW – “SEETHING AKIRA IS LIVING PROOF THAT WITH THE HELP OF M2TM, ANY YOUNG BAND CAN ACHIEVE THEIR DREAMS”


The expression; ‘Hard Work Pays off” has never been so appropriate for a band such as Seething Akira. The bands’ skyward trajectory has been one of the UK’s underground success stories that just keeps on giving. Vocalists, Charlie Bowes and Kit Conrad took some time out from their busy schedule to talk about their relationship with their unique crossover sound, their new album, and how they emerged from the Portsmouth Club scene, to some of the most desirable stages across the UK.

There are certain types of music that just put a smile on your face. Seething Akira are one of those bands. Smashing elements of Tech Metal and EDM together with sprinkles of Drum & Bass and…well just pure fucking energy. It’s almost impossible to ignore their presence.

With some considerable wins under their collective belts, the guys are on the brink of releasing their third studio album ‘NOZOMI‘ , due for release on November 11th via FixT [pre-order here], the future’s looking bright for the five piece… 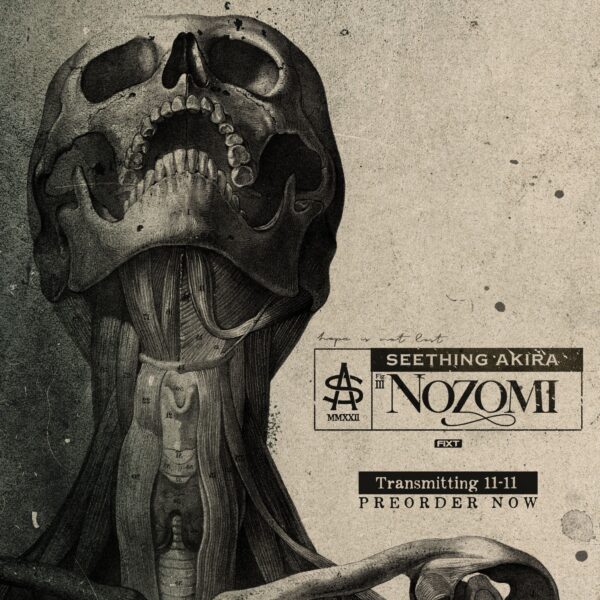 OD – Seething Akira has seen some significant milestones over the last few years, especially from early 2019 to present day. Besides the music has there been anything significant that has helped along the way?

CHARLIE – It sure has been a great ride recently! I think the ongoing support of many long-term SA believers has been invaluable. The support network has always been there, believing in us, willing us on, and I feel we’re finally starting to deliver the material and live show’s we always aimed for, and wanted to present to the fans and supporters.  Thus it’s been a very special 24 months. OD – Let us go a back a bit here, coming from Portsmouth, when you think back to when you started  in 2013 and the styles of genres that the band have become so well known for, did you experience much resistance from your local scene?

KIT – For sure. We never really did fit into a predominantly ‘guitar band’ city. There were always pockets of supporters enjoying our defiance, but I’d be lying if I say it wasn’t a tough start. Perhaps having that sort of adversity early on is what’s helped us shape ourselves today.

As cliche as it sounds, I’d definitely advise any young band starting out, be yourself, write whatever you like, the true meaning of success is how many doors you knock down whilst ignoring what you’re ‘supposed’ to write. People start to understand, if you’re around long enough you’re true to your style and yourself. That’s the best yardstick of success.

OD – Of course, your debut album, ‘Sleepy Skeletor’ was released in 2018 and pretty much set the bar for what was to later come. When you look back at that period and consider the risks that the band had taken, was there ever any temptation to follow trends and keep things safe, or were you ready to take on the world?

CHARLIE – Wow, that was a fun time. We love Sleepy Skeletor, but it really was a trial run of a sound we didn’t know we wanted to write. It was kind of a summary of all our previous work, as it was essentially our first release.

It was a learning curve, not just of the industry, but of us learning what style Seething Akira really is. We had some great reviews with the early material, but ultimately, it was only ever us finding our feet of our sound today.

OD – Having won your local Metal 2 The Masses event in 2017 leading to your debut performance at Bloodstock Festival, how did that opportunity help you

KIT – It was astronomical. I feel all bands are looking for “that chance”, and M2TM was ours. I think we had pre-conceptions of what bands would be preferred, and for our name to be read out, us, this little messy punk, metal, electronic crossover band from Portsmouth? damn that was a legitimate shock! Down The Barrel Photography 2022

For me it cemented how BOA are open to many styles and sounds give us our first , which really gives literally any band the opportunity to aim for the big stages.

OD – When you see other bands coming up through Metal 2 The Masses, do you feel that the annual event itself has given a much-needed shot in the arm for local underground scenes?

CHARLIE –  I would go as far as to say it’s vital. Seething Akira is living proof that with the help of grass roots opportunity events such as M2TMs, any young band can aim as high as they want to dream. I think Bloodstock understands that the real bands of tomorrow hoping to fill that void when the current headliners have retired can and need to be nurtured.

The question keeps arising “who will be headlining metal festivals in 10 years?” just expecting them to materialiSe. M2TM is actually actively building these bands, preparing these bands. I think the true value of the good work being done will only really be appreciated in years to come. 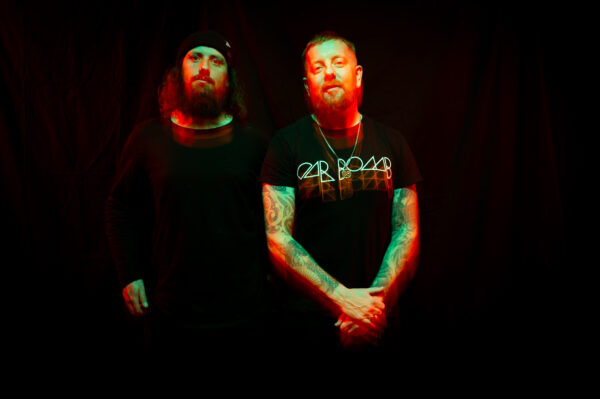 OD – You returned to Bloodstock in 2021 and performed on the Sophie Lancaster Stage to critical acclaim. Did that kind of feel full circle in a way for you?

KIT – The circle’s not closed yet, we still got the Ronnie James Dio Stage to go, right? [Laughing] It was just great to be home. Performing on the Sophie Stage was, of course, an incredible honour. It was our second gig after Lockdown, and honestly, in between songs there were tears from a few of us up there on that stage.

As it was such an emotional time for everyone getting back together again it was a truly special moment, so we went all out to give everyone the show they deserved, which I hope we did. The tent seemed to think so!

OD – Being a festival that you’ve performed at twice now, do you have a special connection with Bloodstock?

CHARLIE – 100%. I think as Kit said, “It’s home”. It’s so tough to get buy-in from this industry and people in it. As with so many bands, they’re just after a chance to give back and fortunately for us BOA has always had our backs, giving us a platform to show people our improvements and showcase our journey.

It’s just a beautiful place to be, so many incredible people attend every year. It’s big, but hasn’t seemed to have lost any of the community vibes that are deep rooted.

OD – Not only did you perform at Bloodstock, but you also performed at Download this year. When you get on stages at events like this, does it have a knock-on effect with regards to inspiration to create and push yourselves even harder?

KIT – Very much so. It was great to be invited to Download for the first time this year. Now we’ve hit a few larger stages in the UK and abroad the ‘show’ is always in the back of our minds when writing material, thinking of lighting, stage props etc. I think from day dot, Seething Akira has always had the mentality that we’re not on stage playing to the fans, we’re all together, partying together. I think if you’ve ever watched us dance on stage we don’t give two donkeys what we look like and that’s exactly what we want to project to the crowd. With the bigger stages we get to convey that message to a wider audience, and let them know that in this world that seems to be cosmetically driven, it actually means nothing! Dance like nobody’s watching! Saying all that, we’re the same band in front of 6 or 6000 people!

OD – As well as those accomplishments that you’ve already achieved, I understand that you found a home with FixT in L.A.? How did that come about?

CHARLIE – Yeah, it’s been a fantastic partnership so far. The guys at FixT had been keeping an eye on us for some years. With ours and FixT’s progression over the past few years, this was the right time to hook-up and see if we can grow together.

There’s something special about finding a label that genuinely wants to support you whenever they can. There’s also some other great artists on the label, so we get some great dialogue of do’s, don’ts etc. It’s our US family!

OD – The interest in the band has been incredible to see with your online streaming numbers going through the roof with your single ‘The Fallen’ hitting over 100K streams and regularly being picked up on playlists. Have you noticed a significant rise in your audience from around the world?

KIT – Man, it’s truly been insane! I remember seeing our album ‘Dysfunctional Wonderland’ hitting 1Million streams last year from all over the world, that was a proud dad moment. The streams for us really is a promo tool. We just want enough people to hear us online, to want to come and see us live though, that’s our happy place!

OD – With your second album ‘Dysfunctional Wonderland’ now in the rear view mirror, the band have been dropping new music with singles, ‘Punishment Instructions’, ‘Internal Antagonist’ and the latest single, ‘Metaphors’ – when can we expect the new album? KIT –  To sum it up, this album has been specifically designed for live shows. The album, ‘Nozomi’ is entirely built around one concept ‘hope’. It’s going to be the most energetic, high pace album we’ve ever released and I can’t wait to slap it in-front of unwitting souls!

Since going to press, Seething Akira have been announced as headliners for the UK’s annual Techfest this November 20th. Check out the line up below and pick up your tickets here. 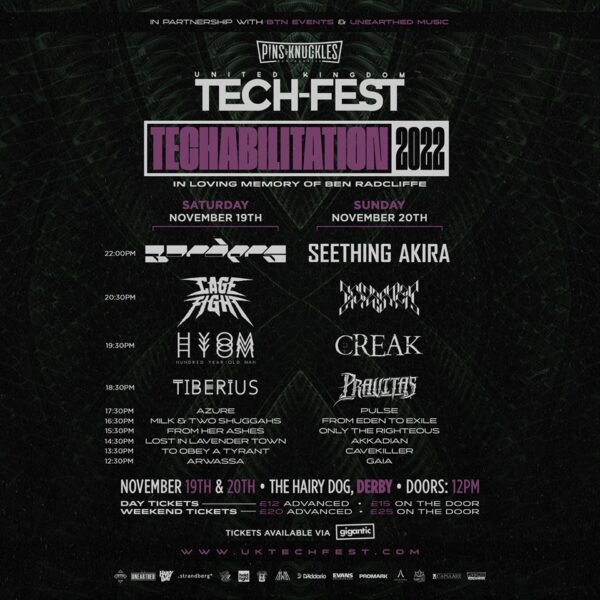