Shining set to bring the pain to Dublin.


This Friday night will see a brutal assault on the ears with the return of Shining. Dublin’s Voodoo will be the host to this very special show. Got your ticket yet? 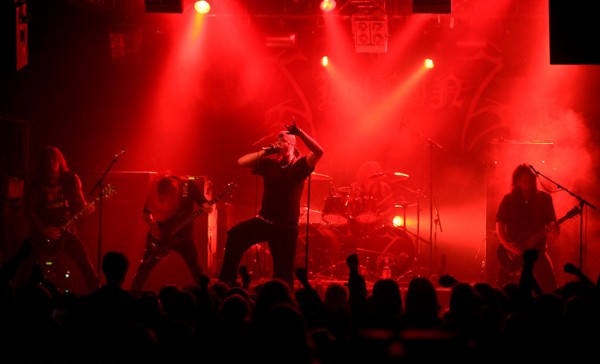 Having recently announced that SHINING has teamed up with Norway’s DARK ESSENCE RECORDS to release a new full-length album, Sweden’s SHINING has today revealed the cover art by Michal Pawlowski (miszaa.tumblr.com). To be titled “8 ½ – Feberdrömmar I Vaket Tillstånd”, the album will be released in both CD and limited edition black or white 12” vinyl versions, with liner notes by Niklas Kvarforth, and is set to appear on the 23rdSeptember. All three versions are now available to pre-order from Dark Essence R

Whilst the use of the number 8 ½ may seem a little strange to denote what would effectively be a 9th full-length album from the band, its use is deliberate because “8 ½ – Feberdrömmar I Vaket Tillstånd” is a rather special beast from SHINING, consisting as it does of six songs from the “Livets Ändhållplats” and “Angst” era in their original pre-production versions but with the addition of newly recorded bass and guitars, as well as Lars Fredrik Fröslie’s keyboards (ANGST SKVADRON, WOBBLER, ASMEGIN) which the band didn’t start using until their sixth album.

Additionally, the vocals on each of the tracks will be performed by six different vocalists, including Kvarforth, who have added their own interpretation and given a totally different dimension to all the songs. It’s a project that the SHINING founder and frontman has wanted to do for many years now, and it is also serves as a kick in the teeth to all the bootleggers who have tried to illegally earn money for themselves off the back of the band’s hard work and creativity.

The official video for the track “Tillsammans Är Vi Allt” from SHINING’s album “VII / Född Förlorare” can be seen below.

STERBHAUS is a four-piece thrash/death combo of Stockholm that since the start in 2007 has proved well that quality and a neatly weighed dose of humor can blend in perfect symbiosis.

STERBHAUS has already begun this crusade thru a more qualitative live schedule including tours of Chile, summer festival tours (2012 at Rock Harz festival with AMON AMARTH, BLIND GUARDIAN etc and Metal Splash with ENGEL, SODOM etc among other shows). 2013 has STERBHAUS hitting Europe in support of Vader and Melechesh as well as Extremefest (BEHEMOTH, KATAKLYSM etc). Live is where Sterbhaus is at its’ best.

Tickets for this show are available from Ticketmaster, Tickets.ie, Sound Cellar and Into The Void.

Check out DME Promotions for more information on stage times and support slots.