With this being his biggest headlining show in Ireland, iconic guitar hero and all round bad ass, Slash, returned to give us a masterclass on how to put on a road blocking Hard Rock show. 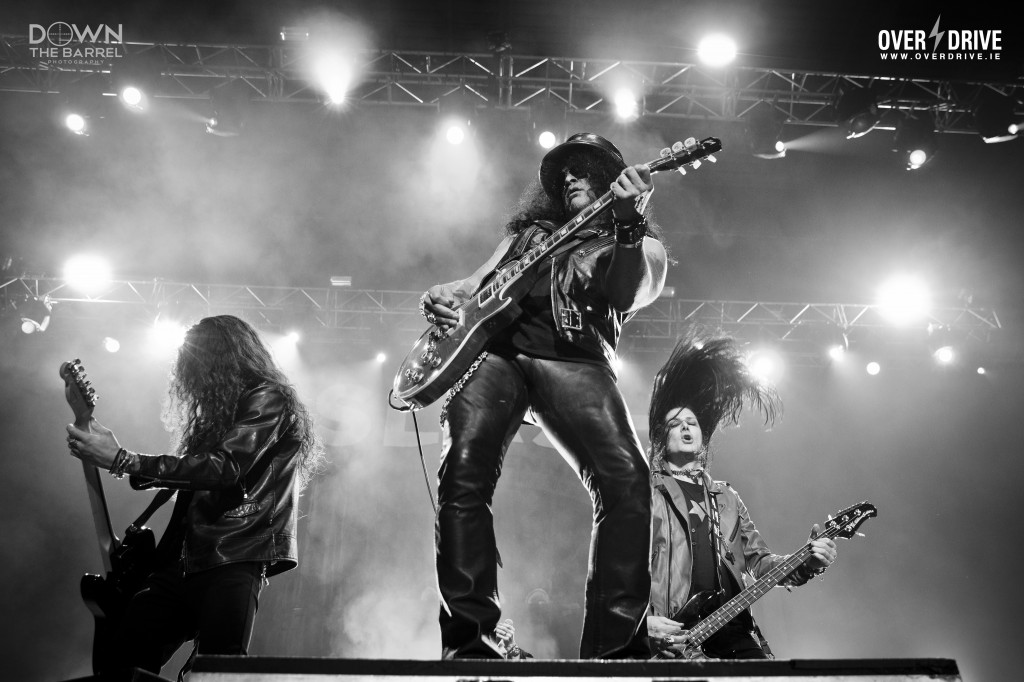 On a dreary miserable Monday night, as the rain battered down on the helpless punters who stood in line outside the 3 Arena in Dublin, there was nothing but good spirits to be had, as we all knew that Slash does not disappoint and tonight was no exception.

As the vast cavernous venue slowly began to fill up, Canada’s Monster Truck took to the stage and just ripped the roof off from the get go. Bassist / vocalist Jon Harvey led his three man riff army through a blistering set that featured Sweet Mountain River and Old Train, taken from their recent and truly awesome Furiosity album. Guitarist Jeremy Widerman made use of the enormous stage by skipping, jumping and flinging himself around as drummer, Steve Kiely and keyboardist Brandon Bliss blasted out their infectious 70’s influenced, biker bar soundtrack.

Monster Truck are a fantastic live band that have managed to encapsulate the essence of ZZ Top and Deep Purple with a drop of Clutch and a sprinkle of Skynyrd thrown in for good measure, all the while keeping their very own trademark sound. The 3 Arena crowd are lapping them up and judging by the rapturous applause, it looks like the Canadians have won over quite a few punters tonight. As they wrap up with the magnificent “Seven Seas Blues” from their Brown EP, they make their exit and seem genuinely pleased with the reaction from their debut performance in Ireland and their first night on this tour. Lets hope that we see Monster Truck back in Ireland for a headline show in the near future.

So, on to the main event of the evening and with the now rammed venue scuttling for beers and toilet breaks, the anticipation of SLASH has reached a high point. As the trademark smiley face and hat image backdrop is displayed, a huge roar echoes around the 3 Arena and all of a sudden we are plunged into darkness signaling beginning of what we are hoping will be an unforgettable show. 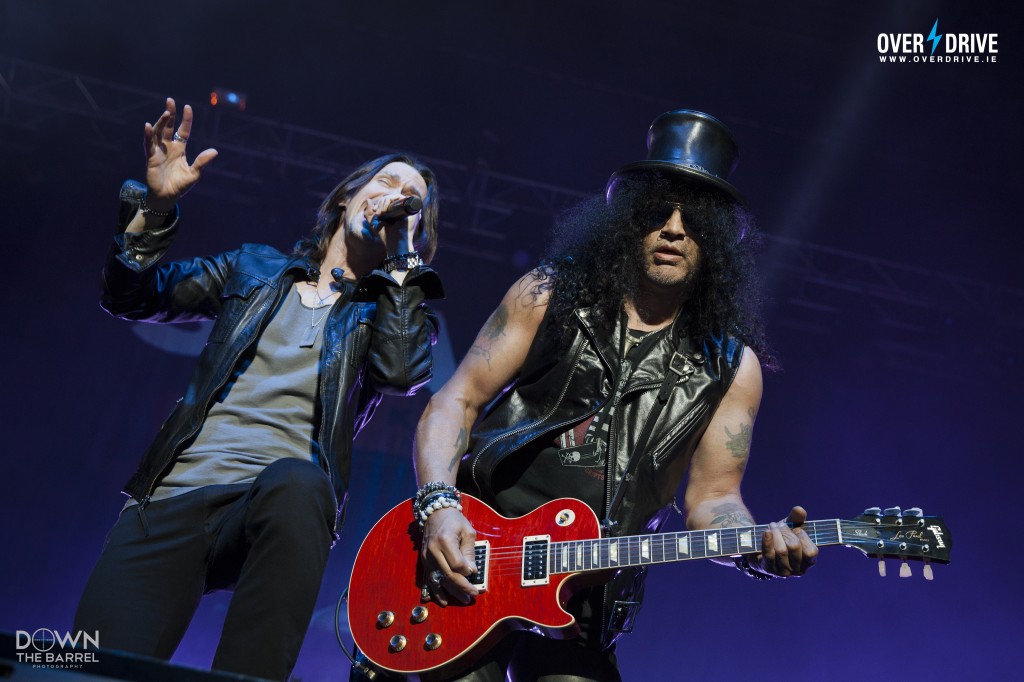 A warm glow of yellows and reds light up the stage accompanied by some old school circus / freak show music and as each member appears on stage the crowd are deafening! Bathed in the house spotlight, Slash gets straight down to business opening with “Your A Lie”. The sound is incredible tonight with a perfect mix and a deep, crystal clear balance between Myles’s vocals and Slash’s guitar tone.

With a rather simple stage set up, but impressive all the same, backing band The Conspirators featuring Todd Kerns (Bass), Brent Fitz (Drums) and Frank Sidoris (Guitar), look and sound 100% on point tonight and are incredible musicians in their own right delivering each song with precision and genuine heart and soul.

G n’ R classic “Nightrain” comes next and pushes the level of crowd excitement to “bat shit crazy”. As Slash rips out the all too familiar solo, one can’t help feeling that there are very few musicians that have the swagger and ability to perform like this anymore. This is the definition of what Rock really is and is fast becoming a very endangered species. 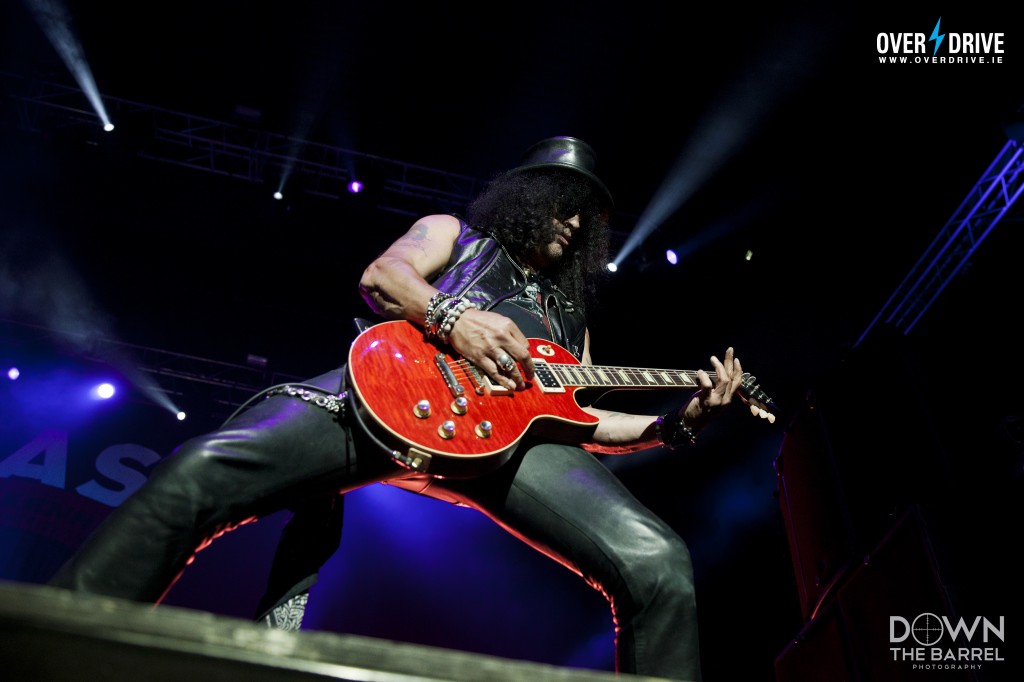 “Halo” and “Avalon” come blasting out of the house PA packed with attitude, swagger and confidence. Each member of the band are now clearly warmed up and ready to take you all the way down the Sun Set Strip for a night of musical debauchery!

As Slash struts around the stage, ripping out riff’s and solo’s to make many a grown man cry, it becomes apparent that there is a tight bond between each musician. I have witnessed solo artists in a live setting in the past and usually it’s more common to see a stiffness and almost uncomfortable feeling of stage boundaries (see Yngwie Malmsteen) and spotlight hogging (see Yngwie Malmsteen again!), however tonight there is nothing but a bunch of friends who respect each other and want to just have a good old time!

What comes next is “Back From Cali, Stone Blind” and crowd favourite “You Could Be Mine”. Myles Kennedy effortlessly delivers a quality vocal performance throughout the night, all the while keeping his front man antics on the down low. As front man for Alterbridge, there is a definite difference in his stage presence when performing with Slash which works perfectly. 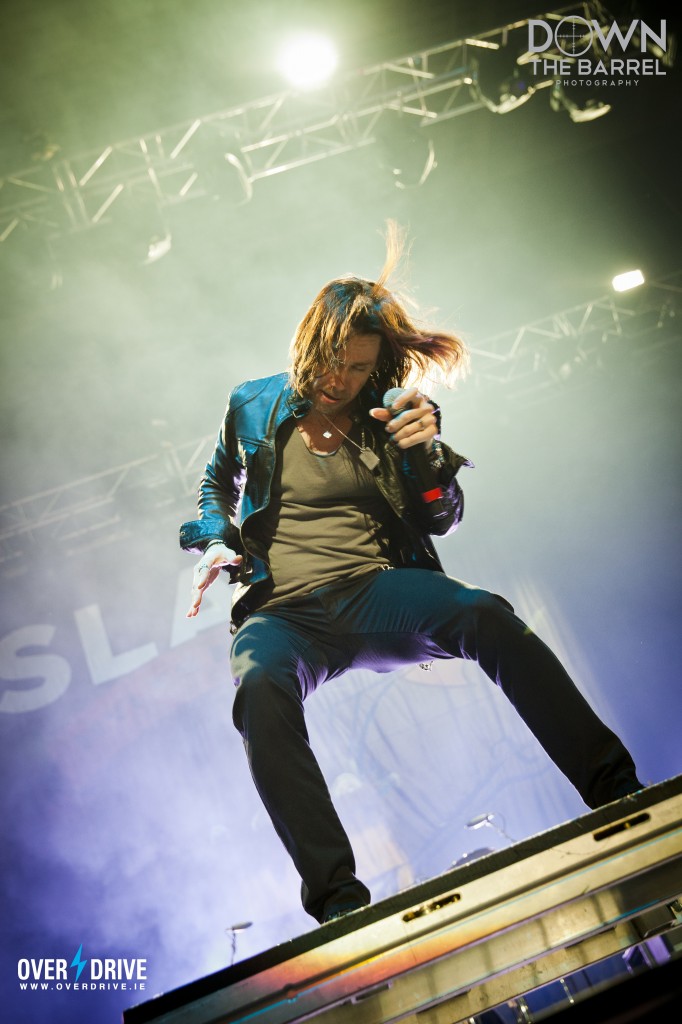 With each guitar solo perfectly delivered throughout tonight’s set list, Slash seems to be in his own world and happily dances and hops around the stage all the while regularly connecting with Sidoris, Kerns and Fitz. Bassist Todd Kearns pulls off “Rock Star” moves with ease and flicks his long black hair around, all the while lashing out a low end rumble. He casts himself as a striking figure on stage and does a killer job of keeping a high level of energy amongst the rest of the band. 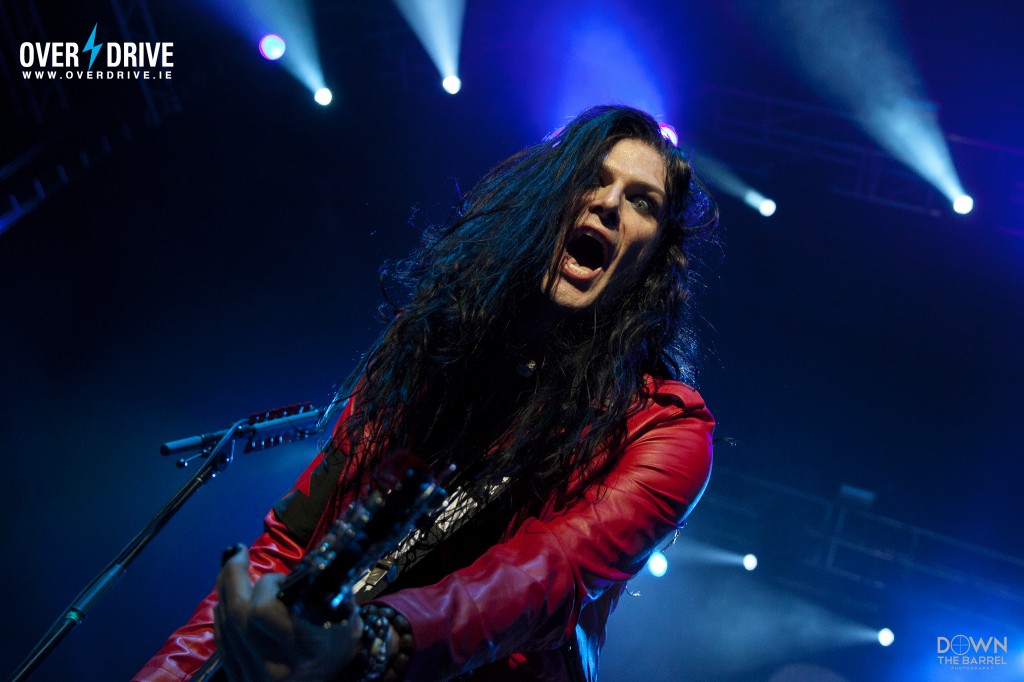 “Shots Fired, Doctor Alibi” and G n’ R classic “Your Crazy” come fast and loose with huge singalongs from the crowd, before “Wicked Stone, 30 Years To Life” and a live premier of “Beneath The Savage Sun” is performed, after which Myles thanks the crowd, as it would seem that they were a little nervous playing for the very first time, not that anyone would have know as it sounded pitch perfect! 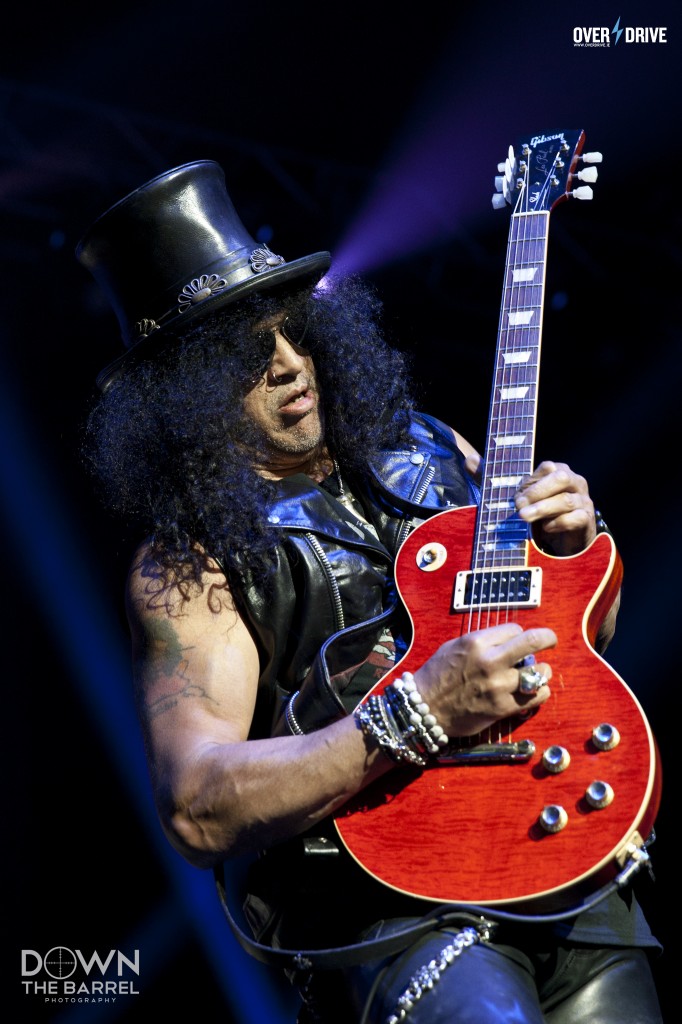 Up next is “Rocket Queen” which encourages the loss of many pints of beer to the venue floor and see’s a mammoth middle section guitar solo from the man himself. With Myles off stage and Sidoris and Kerns standing back in the shadows, it’s time for Slash to unleash his brilliance and he does so with his off the cuff, raw, blues driven and totally unique style.

Usually, guitar solo’s inspire mass evacuations to the bar / toilet but tonight the venue capacity are hypnotized and awestruck! As Myles, returns to the stage and the band bash out the remainder of “Rocket Queen” what follows is “Bent To Fly” and the ass kicking title track from the new album “World On Fire”, which goes down a storm. 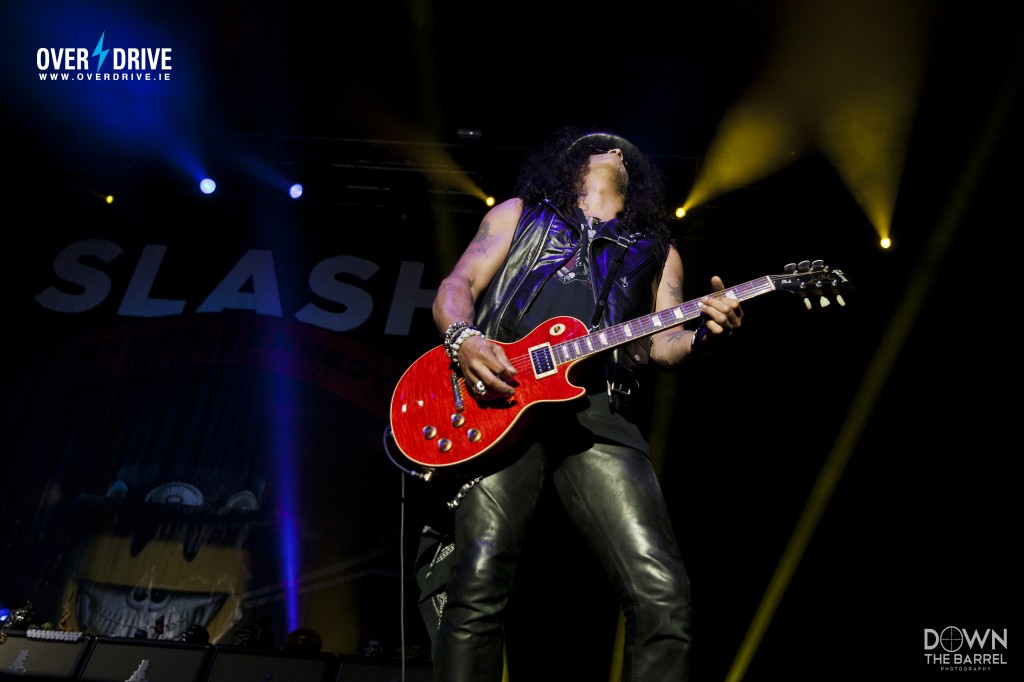 Taking center stage for “Anastasia”, the opening chords see’s Slash bathed in an amber glow from the house lights and as he skips back to his stack of amps, Myles leads the charge and opens up a can of whoop ass before launching into “Sweet Child Of Mine”, which naturally see’s the entire venue loose what shit they have left!

Finally, the opening chords to “Slither” comes galloping from the stage and again drives the final nail in the coffin for anyone who was expecting this to be a moderate gig! Slash whips around the stage with boundless energy and explodes with a ferocious solo that has me thinking if we will ever see Velvet Revolver make a return.

With room for one encore, it can only be the anthem that is “Paradise City” and with the celebration of all in attendance tonight, the all too familiar opening has every punter under the roof smiling from ear to ear and singing at the top of their lungs.

Confetti rains from the roof to signal the indefinite finalé of tonight show and as the band take their bows on stage and bid us goodnight, the venue clears out into the cold November air with ringing ears and wide smiles.

Check out the show gallery below. 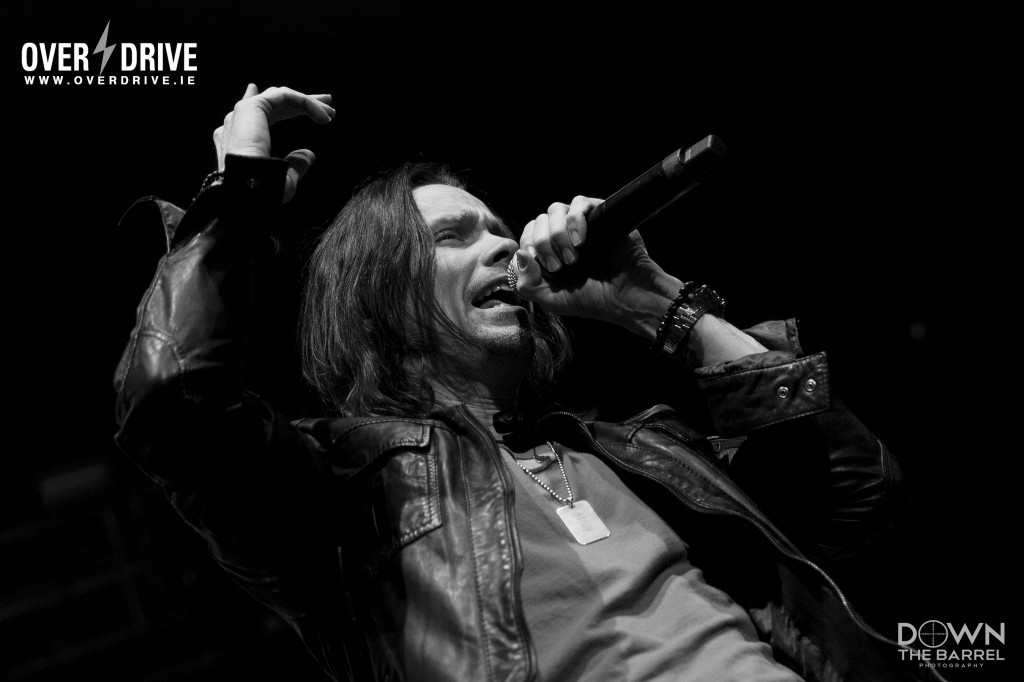 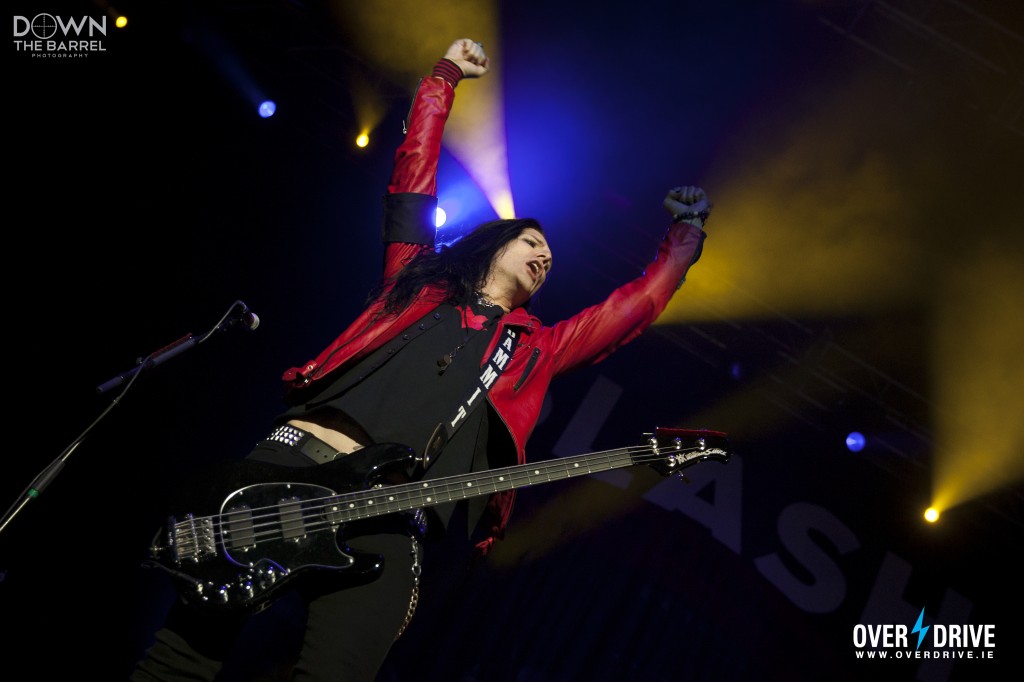 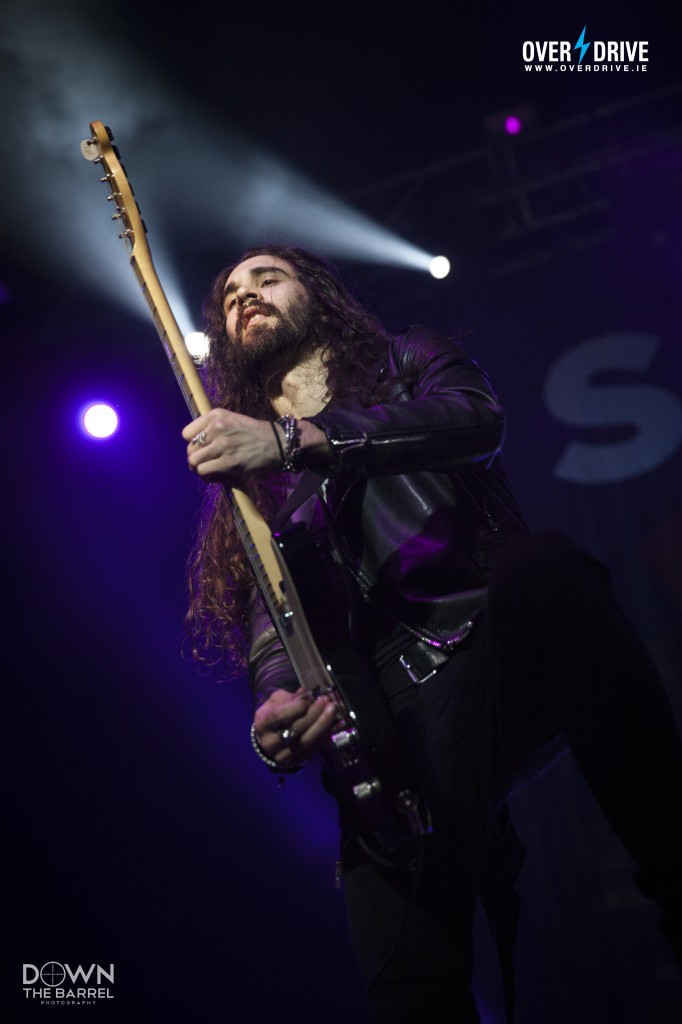 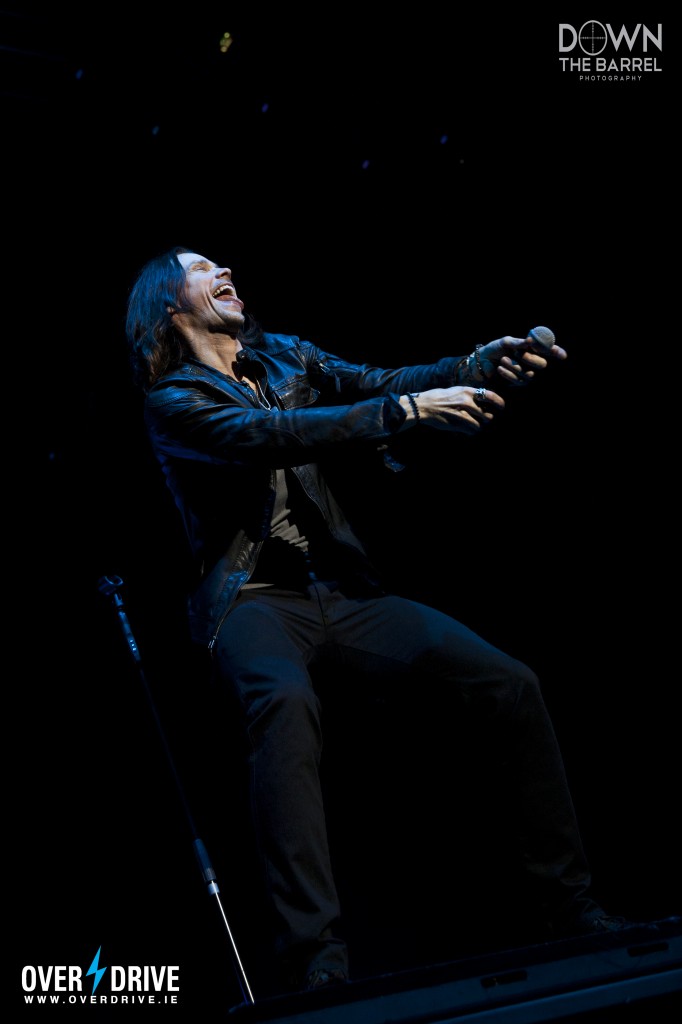