SLASH FT. MYLES KENNEDY & THE CONSPIRATORS are pleased to announce European Tour dates in February and March 2019 – following on from their USA headline tour in September and October 2018.

The European tour will support the imminent release of Slash’s fourth solo album LIVING THE DREAM. 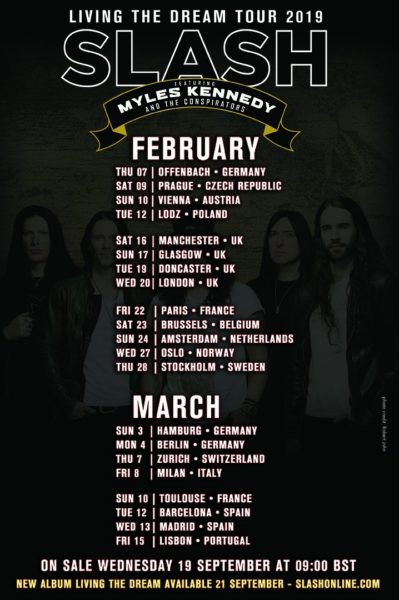 Tickets for the tour are available at this location from 9 am GMT Wednesday 19th September 2019. Support is yet to be confirmed.

For the UK, pre-order ‘Living The Dream‘ via the Roadrunner Records UK store here by 2 pm on Thursday 13th September 2018 to get access to an early pre-sale for tickets to these UK shows which starts Friday 14th September at 9 am. (Tickets are limited and allocated on a first come, first served basis, max 2 tickets per person).

SLASH FT. MYLES KENNEDY & THE CONSPIRATORS will release their new album titled ‘LIVING THE DREAM‘ on 21st September 2018 via SLASH’s own label Snakepit Records, in partnership with Roadrunner Records.

The group have already unleashed “Driving Rain”–the first single off ‘LIVING THE DREAM’.

The band has launched a physical pre-order for LIVING THE DREAM including CD, Heavyweight vinyl and a limited edition Deluxe Premium Set consisting of  2LP Yellow Vinyl within a Premium “Living The Dream” Vinyl-size 20 page Hardback Book, an exclusive one-sided 7” single of “Driving Rain” featuring an etching on the B-side with a special set of SLASH plectrums, Standard Physical CD album and  poster.

All formats are available to order along with a limited-edition T-shirt and Hoodie. To view a variety of the LIVING THE DREAM CD/merchandise bundles, please visit this link. 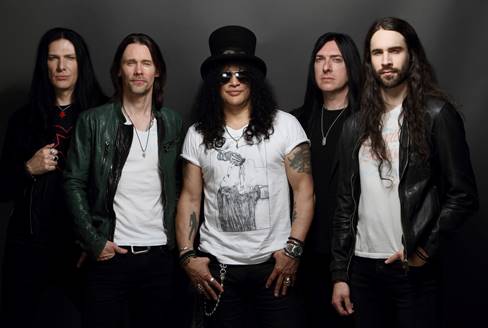