One of Germany’s most significant Thrash Metal bands, SODOM have teamed up with BMG to release a very special re-issue of their critically acclaimed LP, ‘M-16’. 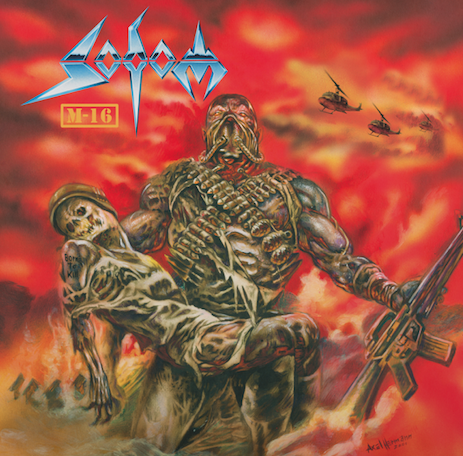 Almost twenty years ago to the day, celebrated thrash metal act Sodom released one of the most significant albums of its career: ‘M-16’.

The album continues to be a challenge both musically and in terms of its content still touches upon a very sensitive issue in the history of mankind.

The theme of the iconic concept album is the Vietnam War, which was officially fought between North and South Vietnam in the 1960s, with the intervention of 500,000 US soldiers fighting and supporting anti-communist North Vietnam against Eastern Bloc detachments.

Songs such as ‘Among The Weirdcong’, ‘Napalm In The Morning’, ‘Minejumper’ and ‘Cannon Fodder’ see musicians Tom Angelripper (vocals, bass), Bernemann (guitar), and Bobby Schottkowski (drums), who recorded the album at the time, hauntingly evoke through harsh metal sounds and unmistakable words images of war, brutalisation and devastation, grievances and the excesses of Western civilisation.

‘M-16’ continued Sodom’s tradition of politically committed and socio-critical albums such as ‘Agent Orange’ (1989) and ‘Code Red’ (1999). No doubt: In autumn 2001, Sodom succeeded in creating a masterpiece of international metal history, now set to be re-released on 26th November 2021, remastered by Sodom drummer Toni Merkel and featuring extensive bonus material as well as attractive fan items in a premium-quality package.

‘M-16 (20th Anniversary Edition)’ is available in three different formats, as a deluxe box set, including the remastered original album plus bonus live tracks, two additional bootleg LPs with further previously unreleased live versions (recorded in Germany, Thailand, Japan), a USB stick in the shape of a rifle cartridge with all the album songs, a Sodom military ID badge, a poster featuring the cover artwork plus a 44-page booklet with rare photos and liner notes by Tom Angelripper.

In the booklet, music journalist Manni Eisenblätter, whose private archive contains countless unpublished Sodom photos, tells the story of the album’s creation and promotion, for which the band travelled to Thailand and South Vietnam just a few weeks before its release, to get a first-hand impression of Vietnam, a country scarred by the devastation of war.

In addition to the remastered original songs, the CD media book includes two previously unreleased live tracks from 2001 and additional never-before-seen Sodom photos, which also can be on the orange vinyl version (2LP, 180g)

Looking back two decades on, ‘M-16’ continues to be a very special album to bandleader Tom Angelripper:

“The recording is definitely one of Sodom’s classics, not least because of its consistent thematic concept. It was also our last collaboration with producer Harris Johns, finalising an important era for the band. I’m very happy that ‘M-16’ will now be re-released as a ‘20th Anniversary Edition’ with new versions and lots of attention to detail.” 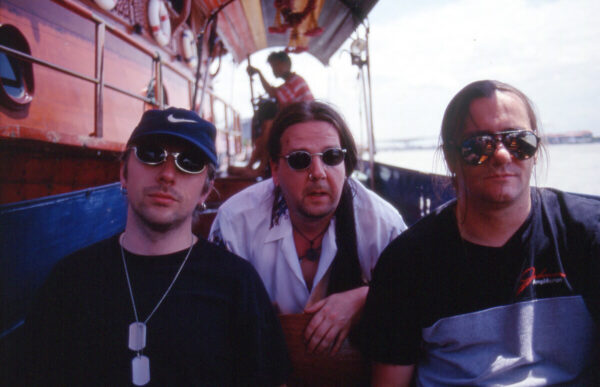