A cold and dreary October midweek evening has a depressing mood to it. We were all at work for the day, then when we leave it’s pissing rain. At least there’s a gig on tonight in Voodoo that’ll lift the spirits. And it does lift them indeed. We are treated to a mix of heavy metal, rock, and… Sólstafir. It’s hard to pin down this band of Icelandic voyagers in a genre other than folk metal… if there is such a thing(?) 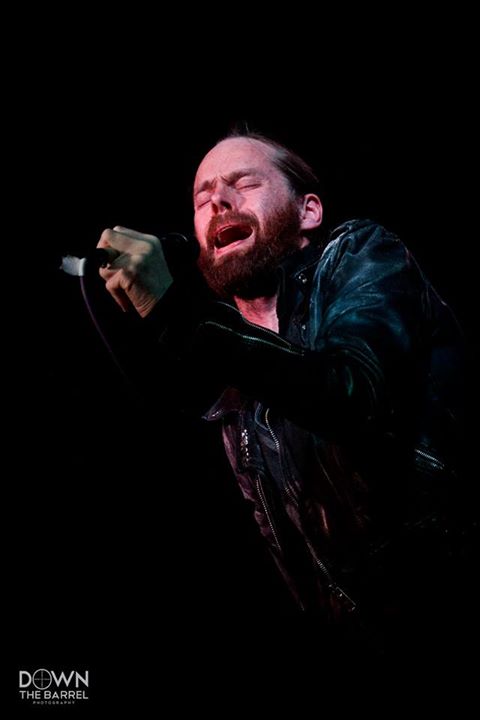 Photo by Down The Barrel Photography

But anyway they weren’t alone. Limerick metallers, Dark Matter, a Limerick city-based gang kick off the night with a heavy, heavy, heavy instrumental set list. Louder than hell itself, the floor rattled with the vibrations. Just a taste of things to come and they draw the growing crowd to the stage. Cue the windmilling of long locks of hair. Not a word is spoken other than, “Thanks”. It doesn’t need to be. There is a ferocity in the beats that needs no introduction or explanation. I get a taste of grunge, with shots of In Flames and Dark Fortress, topped off with a splash of Machine Head. And that’s just the way I like it…..only without lyrics…and they’re from Limerick.

Next up are Dread Sovereign, a 3-piece outfit, who sound like a heavier and slower version of Clutch with some Black Label Society on top. They aren’t on very long, which is a shame, as professions of love for Satan fill the room. It’s slow, it’s heavy, and it has a haunting aura about it… something that I can’t explain in this piece. And I’m rarely stuck for words in this job. But my mind is soon distracted by their cover of Venom’s “Live like an Angel; Die like a Devil”. Haaaa!! Let the pit open up!! And the bodies fly in every direction as expected. That’s their last tune (aww..), and they instruct us to hit the merch stand to send them another 20 miles down the road, because they’re just about to kick off a European tour. I’d love to see one of their full gigs, because they really weren’t on stage long enough for my liking.

Sólstafir are one of those bands that defy logic. Their name means “crepuscular rays” in Icelandic. With a name like something from a fantasy swords and dragons novel, you expect them to be earth-shattering, balls to the wall, hard-blazing heavy metal. But not so. The musicality of their songs is awe-inspiring. There are enough beats and drum crashes to keep your head moving and toes tapping, but the cultural adaptation that they have applied to their music is nothing short of impressive. They took a leaf out of our own book (penned by Thin Lizzy), about singing about their home of Iceland. A cold, rainy, windswept island on the fringes of the Atlantic ocean (sound familiar?). Front-man Aðalbjörn “Addi” Tryggvason (vocals and guitar), is more than man enough to embrace his mother tongue and show the world just what Sólstafir came to do, and that was spread their sound to the 4 corners of the world. Not the heaviest band tonight, but by all means the most original, and that is what is remarkable about this band.

They started out as a prog/black metal band, but found their tuning fork and honed their sound into an emblem of nationality in a country not widely known for its metal community. It’s a cultural awakening for me, if I may get personal for a second. Usually I’m in the pit, knocking lumps out of people around me and getting the shit kicked into me, and afterwards, hitting the bar having beers with both my victims and attackers. But Sólstafir are a different kind of metal. They have originality in buckets, and bring another meaning to the phrase “new wave”. Their music is all communicated in Icelandic, which I don’t understand. They may as well have been singing about Barney the Dinosaur taking heroin for all I know. But I can’t help but give my full attention to what’s on stage. Its encapsulating. And the venue is full to the doors.

Bassist Svavar “Svabbi” Austmann is the most animated on stage. He doesn’t stop banging his head for more than a few seconds at a time, and I think that might have been twice during the whole night. I feel the man of the night was drummer Guðmundur Óli Pálmason. His off-beats held together the synchronous melody of beautiful song progression and pure art. This really was something to see. It reminds me that not all metal is about violence, sex, drugs, and all the forbidden things that we want to do but can’t. That’s the easy way to write a metal song. It reaches a wider audience. Sólstafir describe their art as a wondrous journey into a deeper, more meaningful side of expression, but still keeping it metal. That’s an art within itself.

Guitarist Sæþór Maríus “Pjúddi” Sæþórsson, decked out in cowboy gear, supplies the licks with Tryggvason’s harmonious vocals. He describes his life being changed when he heard Thin Lizzy as a kid, and dedicates a song to Phil Lynnott. Every Irishman raises in the room his voice in appreciation and admiration. Tryggvason also goes a bit Axl Rose for a while, complete with leather hat and mic animation. Fuck it sure, it’s a rock gig! The dedication swims well with the crowd, and the night is a blitz of cool songs, pitch-bending rhythm sections and by far, the most unrepeatable lyrics I’ve ever heard (and that’s really saying something).

The night ends without an encore, but I don’t mind. The message has been delivered, and it’s time to go home. I’m chilled out, I’m funked up at the same time, and the rain doesn’t bother me anymore. It’s like Sólstafir took the aggression out of metal, but left all the good vibes and music. It’s a new experience for me. Amazingly, they’ve only played 10 songs. It felt as if the last 90 minutes could have vanished in a night of music that I don’t remember. That’s how I know I was totally lost in the music. It’s a nice feeling to just let go once in a while. It’s good for the soul.

Goddess of the Ages