At the end of another weekend, Dublin is winding down after the first glorious weekend of good weather so far this year. It has been warm all weekend, but a Scandinavian wind blows from the North, bringing with it an arctic force that has not been on these shores for quite some time. Sonata Arctica returns to Ireland to claim their rightful spot as one of the rising forces of power metal, and Overdrive sent in Shaun Martin to bring back the word from inside the eye of the storm. 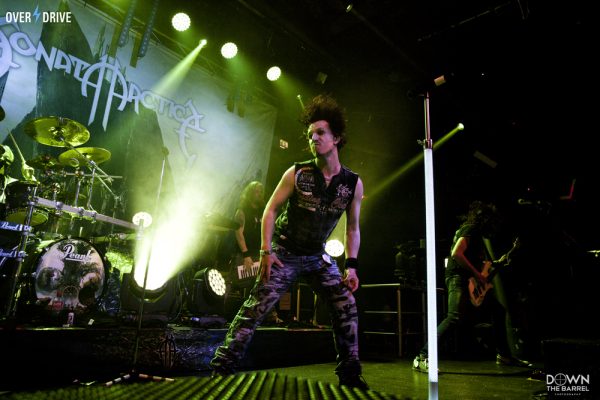 Breaking the ice tonight is Canadian heavy metal 5 piece Striker. They definitely have an early Iron Maiden feel about their stage presence and approach their songs in a relaxed but ball-busting manner. Session guitarist Simon Fallon and permanent axeman Tim Brown high-fiving each other throughout eye-popping harmonised solos add a touch of virtuosity to the shred section. .. not that I’m complaining. Singer Dan Cleary has a hellishly powerful and highly sustainable voice that suits his band’s blend of NWOBHM and 80s hard rock/metal perfectly. I feel however that the drums are mic’d up a little too high, though, as it drowns out the bass section a bit.  Nevertheless, Striker is 100% a band to keep on your radar. (3.5/5) 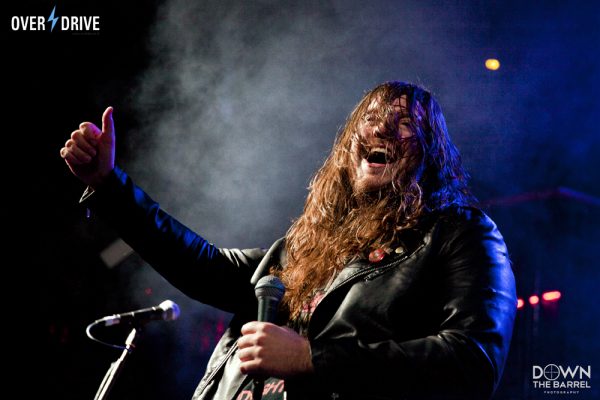 Up next are Thunderstone, from Finland. Singer Pasi Rantanen emerges like a king from the background embracing the crowd as his own, as guitarist Nino Laurenne, keyboardist Juka Karinen, drummer Atte Palokangas and bass player Titus Hjelm (who bears an uncanny resemblance to Geezer Butler from Black Sabbath) break open the melodies for their epic brand of dark symphonic and harrowingly haunting metal.

The hard knocks of the road are evident soon enough, though, as the mic batteries need replacing early into their set … and then the bass cuts out due to batteries also needing replacing in Hjelms’ bass transmitter. Their tech has his hands full, to say the least!! Hjelms acknowledges this mistake during a quick shout out to the crowd and states that it’s been 15 years since the band formed and they never played Dublin. They have even been Eurovision Song Contest entrants in 2007 (possibly a trend sparked by fellow Finns Lordi in 2006). 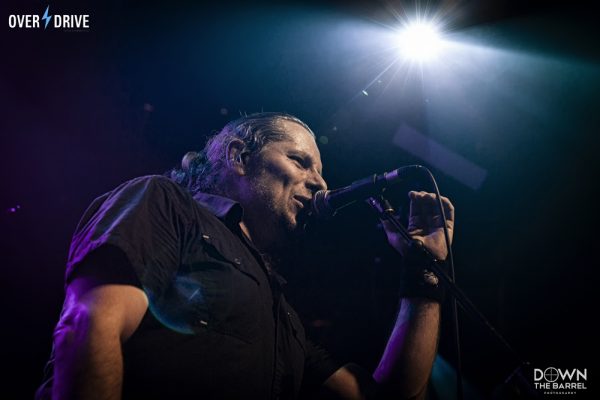 The night progresses steadily enough, but then something awe-inspiring happens. The house lights are requested to be turned off, and the audience is asked to turn on their phone cameras. Hundreds of small beams are emitting a candle-like glow that illuminates the entire venue – it’s a soothing touch to see this, and sets the mood for more than a few embraces seen in the audience from my perch alongside the stage. Rantanen serenades us with their 5th number before it erupts into a powerhouse of emotion, bringing a crescendo of light and sound to us. The fans cheer as scream as Thunderstone bow out so make way for the main event. (4/5) 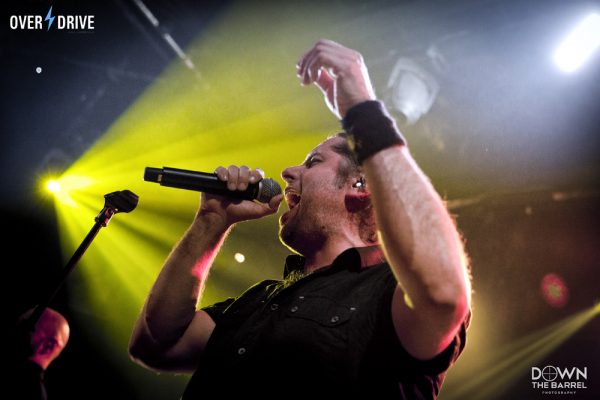 An orchestral intro signals the arrival of Sonata Arctica, who last graced these shores in 2008 at the Button Factory in Dublin’s Templebar. There is a huge crowd that packs the venue and everyone is pumped for the start of the show. The lights go dark, and out come the band one by one, to the rapturous cheer of hundreds of people. Longtime drummer Tommy Portimo kicks off with the intro for ‘Closer to an Animal’, and as bassist Pasi Kauppinen puts the fist in the air and the head down to windmill for all he is worth, guitarist Elias Viljanen and keyboardist Henrik Klingenberg complete the muscle of the band. Vocalist Tony Kakko stands front and centre taking everything in as the sound booms from the Academy stage. 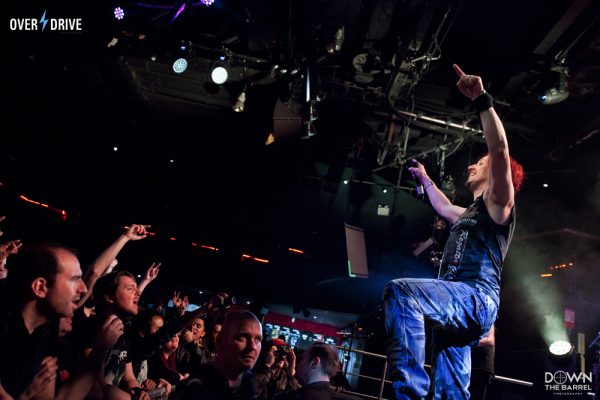 The setlist moves on with ‘Life’ and ‘Wolves Die Young’. It seems that Kakko is slow to get into the groove of tonight, but by song 3 he is firmly in his stride. He encourages everyone here to get to know at least one other person attending the show tonight because that’s how friendships, partnerships, even relationships are formed “You never know who you will meet: just don’t ever be afraid to take a chance!” Wise words indeed. The guitar work by Viljanen is insane.

Sonata Arctica is a rising force in the world of power metal, but Viljanen’s shredder will go down in history. Watching him flip between gentle finger-picking and sweeping triplets into full-blown sweep picking acrobatics makes me wonder why there isn’t smoke coming out of his hand. Keyboards are also flying as Klingenberg is trying to keep up with him. At one point, both bandmates employ a harmony speed solo, where both switch between higher and lower octaves of each note. It is a well-rehearsed piece, and all you can do is stare and shake your head in admiration (and subtle jealousy). 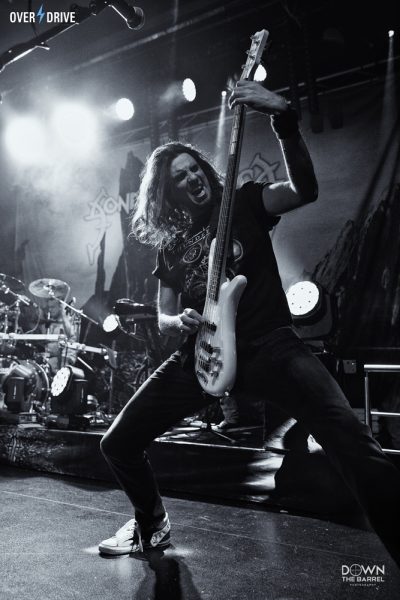 There is an intrinsic feeling of intimacy with Sonata Arctica’s show tonight. Kakko reaches out to each member of the audience vocally and makes eye contact with the fans in his delivery of sombre numbers such as ‘Among the Shooting Stars’, ‘Fairytale’, and ‘Full Moon’. The lights go out again after ‘Abandoned’ and the stage is illuminated by a single strobe light doubling as a mic stand. The eerie glow paves the way for Kakko to dish out another heartfelt serenade ‘We Are What We Are’, smoothly followed by ‘The Power of One’. This ends the night’s entertainment, but the sea of people aren’t done yet. The big guns make a welcome arrival, in the shape of ‘Misplaced’ and ‘I Have A Right’. But then the evening comes crashing to an end with the final nail in the coffin, as ‘Don’t Say a Word’ brings all hell and damnation to the Academy. Heads bang, fists are pumping, and the groove is well and truly on. The metal roots are firmly in place with Sonata Arctica, despite their clean vocals and quaint, theatrical musicianship. They can lay on a severe aural beating if they want to. And they just did. Let’s not leave it so long until next time guys ok? 3.5/5

Misplaced
I Have A Right
Don’t Say A Word

Photo Gallery – Down The Barrel Photography © 2017