Late last week, Overdrive caught up with bassist / vocalist Tom Williams, of Long Island, hardcore four piece, STRAY FROM THE PATH. The guys will be pulling into Dublin’s Academy 2 on Friday 4th of December for a night of brutally heavy riffs and knuckle bleeding goodness! Find out more about the bands new album, “Subliminal Criminals”. 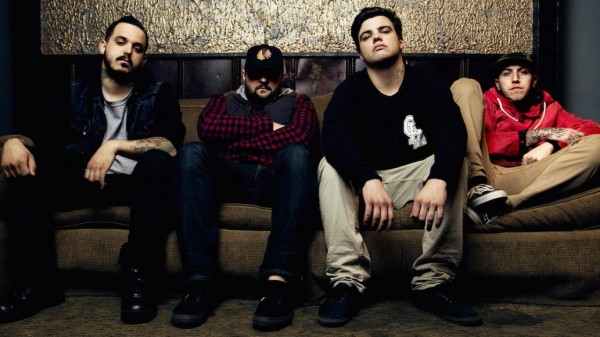 Currently on tour over in the UK, Tom Williams is a busy man that has graciously taken some time out of his day to talk to Overdrive about the new album and the forthcoming show in Dublin’s Academy 2 with Red Enemy and Murdock.

Tickets for the Dublin show are now on sale from Sound Cellar and Ticketmaster priced at €15 (including booking fee). 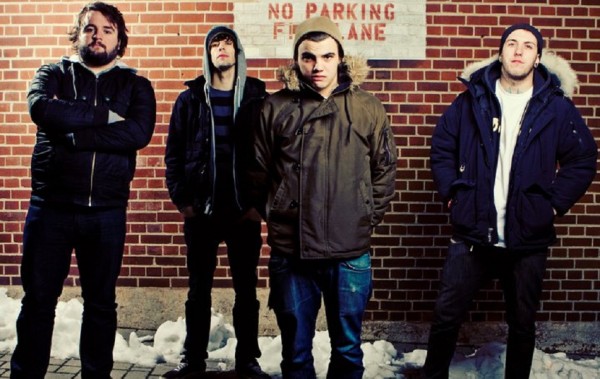 OD – The new album ‘Subliminal Criminals’ came out this past August, can you talk a little about that title and the thought process behind it?

TOM – Well its basically about how there’s a lot of people who are damaging the earth we live on; basically our food supply and our water supply, law enforcement, our healthcare system, our military system… to me, it’s like – people don’t really know that we’ve inherited Planet Earth, and that everyone’s basically fuckin’ ruining it for a bunch of financial reasons. It’s kinda the theme that stretched across every topic that we talk about, so it kinda felt fitting,

OD – From a lyrical point of view, there are many subjects that you tackle on this album like ‘Badge & Bullets’, ‘Outbereak’ (See below) to ‘First World Problem Child’, you are one of the few bands today that are addressing actual problems within our society do you find that more bands need to use the music as a platform to highlight such issues like they used to back in the day?

TOM – Yeah well like, even for myself growin’ up in the ‘90s there was as well. But I don’t really find it to be so common now, which is unfortunate and it’s definitely something that we try to explain to the younger kids that come to the shows that it’s important that if you do get the opportunity to be in a band for a time, you should be using that as a reason to do something. But there are definitely some bands like Stick to Your Guns and Architects, to name a couple, and we got pretty close with those bands because we admire what they do and whatnot, and we hope that as Stray From The Path, start to become a little bit more popular, that the kids that are growing up and starting bands want to tour and look up to bands like us and like me, when I was a kid and bands that I used to look up to like Refused, and Rage Against the Machine, that they all did that. Like being important and using their opportunity to do something a little bit crazier with, so yeah it’s a shame, but there’s definitely the ones that are doing it, are doing it right. And there’s definitely a lot to be excited about.

OD – The cover of the album is very much a simple yet powerful image, how did it come about that the bird was chosen for the cover? 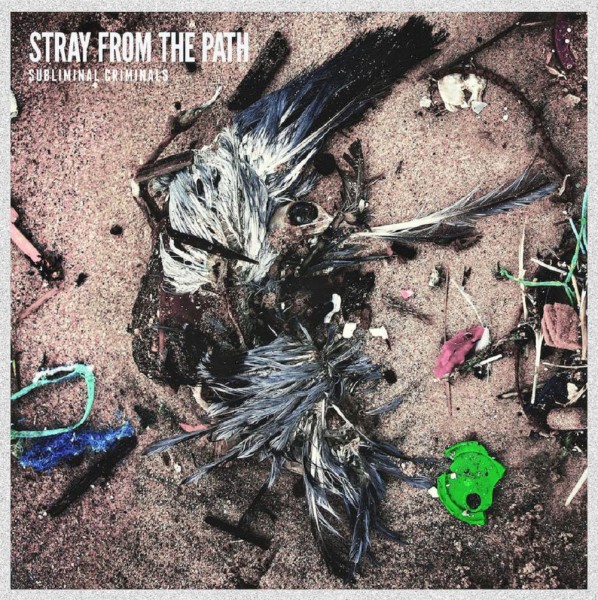 TOM – Well we didn’t take that picture – it was a photographer that let us use it.. I honestly can’t remember the name off the top of my head. But she let us use it and basically not even just the cover, but the entire layout is supposed to be like what I was talking about before, like people burning down forests, people polluting so much.. Setting fire to the ocean and shit like oil and all this crazy stuff – its basically showing people like this is real, these are real photos, and everyone is fucking blowing it, you know?

OD – There is a vast amount of influences regarding sound happening on this album, did you set out to make something a little different, by incorporating new elements into the original sound? 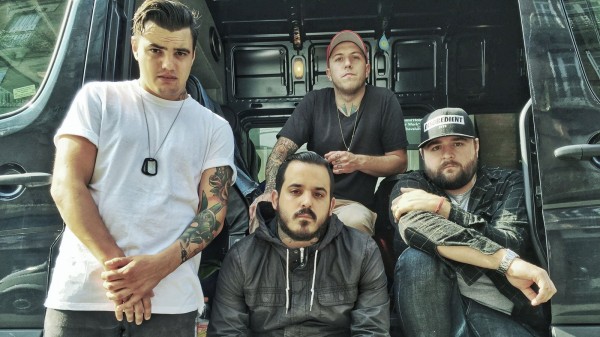 TOM – When the band started, we started with that mentality of trying to do something a little different than what most bands are doing and I think that with the boiling pot of influences that we have, because we all worked off what we grew up listening to and we talked about that before about RATM, Refused and Converge, and those are the bands that got me excited to play music, and honestly a lot of bands aren’t doing that right now as well. It also comes from a lack of what I’m hearing, of what I love in heavy music and the fact that it doesn’t really exist. I love Stray – like, I love the music, I listen to it as a fan, because we’ve always just written for ourselves and what I expect from heavy bands and all of that. And honestly, if there were a lot of bands like us ad there wasn’t a lot of softer bands, who knows? We could have been a softer band and we would be nipping from that genre. So it really comes from an absence of what we love in that whole genre and just doing it ourselves basically.

OD – You played Download festival for the first time earlier this year, what do you think of the difference between festivals like this and one’s in America. There is a more paranoid level of security in American that can kind of dampen the spirits of the show? 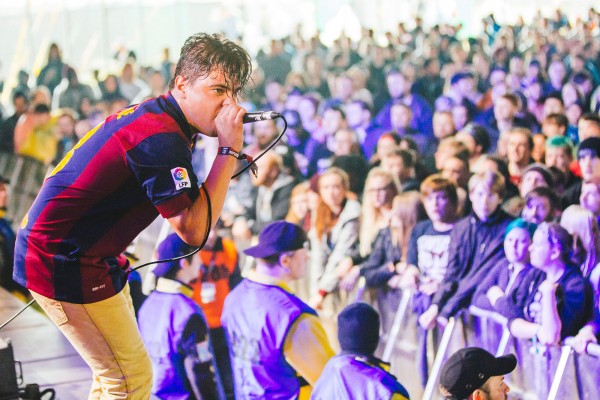 TOM – That’s America in general! They get kind of, like, scared of everything and that has kids watching this shit on the TV and get scared easily. But I think honestly, what I like about it is that bigger festivals in the UK show a lot of love to smaller bands. In America, Stray would NEVER play Coachella, but we played a pretty big-sized stage to 5,000+ people in England, you know? So that’s what I love about it – like, after we get offstage, there’ll be a bunch of our friends playing. Every time we play they show a lot more love to different genres, smaller bands, and it helps them grow, and that’s why I feel they’re way better than American festivals.

OD – You have spoken in the past about Sumerian Records believing in you, I gotta say it’s not very often that you hear a band speak so highly of their label; did you have any concerns when you were signing to Sumerian as most labels try to change things and fuck with the chemistry of the bands? 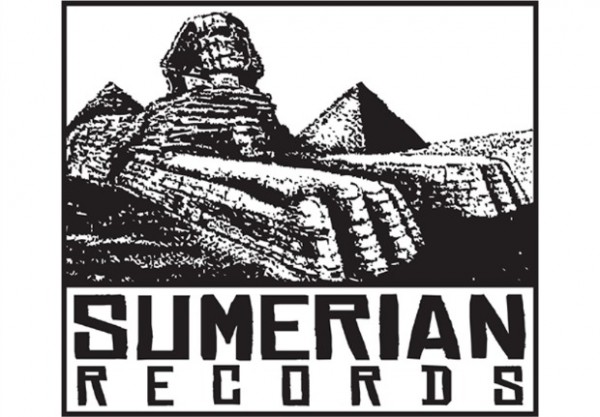 TOM – I wouldn’t say that we were scared, like we were pretty like. “Fuck NO!!” kinda mentality from early on, and we kinda stuck with what we did. Like they’ve been very good to us, and they’ve done things that sucked too like anyone really, but they’ve always stood behind us in our career, and like, we appreciate that fact because a lot of people would have given up on us when we were smaller.

OD – The band has been together now for 15 years and in that time you must have seen so many changes within the industry do you think things are better or worse now for bands that are starting off in the hope of being independent?

TOM – It’s been around 15 – shit I dunno myself! (laughs) Like, I started the band with four different people “whenever” ago, and to me, we didn’t become a real band until Drew (York – vocals) and Dan (Bourke – drums), were in it and we were touring full time and making a record. But it’s hard to say because it probably could be because 6 or 7 years ago it was better, but “Stray” was doing worse, and maybe now, things are worse but “Stray” is doing better. It’s kinda hard to say because when you’re asking if it was better, we weren’t doing good and if it is worse, we’re doing better. It’s kinda hard to answer. But I don’t really like the crowd funding thing. People do it because they’re like “Oh hey, we need some money here’, and that’s the mentality going into it. But to me it’s more like “I really wanna make a record. Who should we make a record with? How big are our songs?” That’s the way that you should think about it. 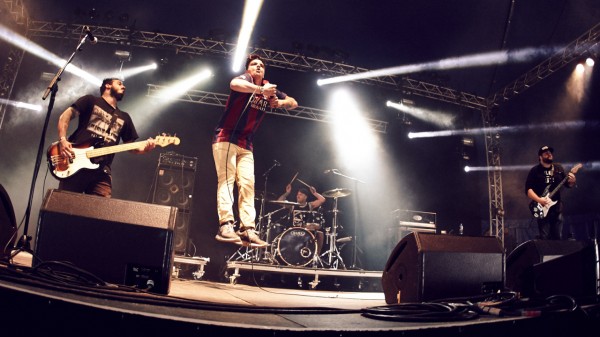 I mean, when some fuckin’, I dunno – Protest The Hero band or something say “Oh we have enough fans – we can get $100,000”, like you don’t need $100,000 to make a record, you just want $100,000!! And they’re gonna spend 10 (thousand) to make the record. But whatever. If people wanna do that, I don’t really give a shit. I used to care a lot more about that stuff, but I’m not about doing it so who cares? Because if you care about that stuff (the music), the most, then the money will just come to you. If you think that you’re performing well and your songs are as good as they can be, and you’re out there doing it, it’ll just come around to you. If you’re good enough, it’ll happen. And we’re lucky enough to get to be a part of that. We get to make a living out of it.

OD – What is your view on the current state of the Hard Core scene right now and what would you like to see change for the better if you could?

TOM – Interesting!. Uhm… I don’t really know. I mean, I’ve been so immersed in “Stray” and our new record, that it’s kinda hard to keep up with it honestly. I think that like what we talked about before, like, I hope that people understand how valuable what they’re doing is, and that if they make sure that if they’re doing it, that they are lucky enough that people care, that they take that opportunity and do something cool with it. And that’s the way that we’ve always thought. And that’s the way that I hope that we can always portray to people. And they can learn something from us and thy can do that.

OD – Are you the type of band that keep writing all the time or do you tend to step away from it whilst on tour?

OD – When you look back on the last 30 years of heavy music be it hardcore / punk / thrash / metal etc, what era do you find yourself drawn to the most. I guess it’s like do you have a personal “Golden Years!” of music that you go back to time after time?

TOM – I would say I’d have always stuck with the 90’s, because that’s when all my favourite bands came out and that’s when it all came out and started discovering music. I wish I’d had, not more appreciation, but have been more aware about what was happening during the time. Because when I was getting records for the first time, I was like 10 or 11 or 12 and I’m now 28 and I wanna get those records and appreciate them like I appreciate one now. You cant change that, but I’m glad that that was the introduction to music for me.

OD – When you’re done with this run of dates, what’s next for the band?

TOM – We’re doing Australia in January, then we go back to Europe in February, and then we’re probably gonna chill in March and go back and do the States in April. And then I dunno – we’re figuring out some summer stuff right now. We’ll just kinda take it as it goes. It’s been a pretty good ride so far and we’ve got a lot coming up next year, so I’m pretty excited.

For Stray From The Path merchandise, just click on this link.

WIN A PAIR OF TICKETS TO SEE STRAY FROM THE PATH THIS FRIDAY DECEMBER 4TH IN DUBLIN’S ACADEMY 2 VENUE. 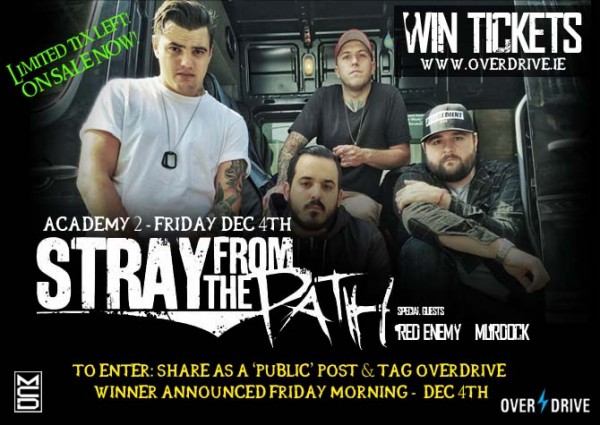