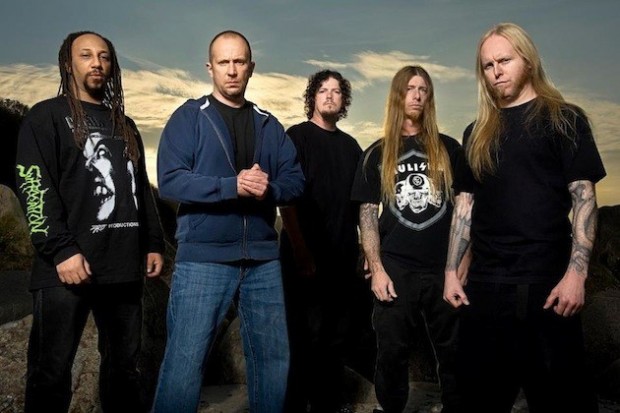 “Pinnacle Of Bedlam”, the new ferocious sledgehammer by legendary U.S. death metallers SUFFOCATION, is OUT NOW!

The album was produced by the band and tracked at Full Force Studios in New York by longtime collaborator Joe Cincotta. The mixing and mastering was handled this time around by world renowned producer/engineer Zeuss (HATEBREED, ARSIS, SUICIDE SILENCE). Cover artwork for Pinnacle of Bedlam was created by artist Raymond Swanland (DEEDS OF FLESH, PSYCROPTIC).Check out the video selection of the making of the album below. 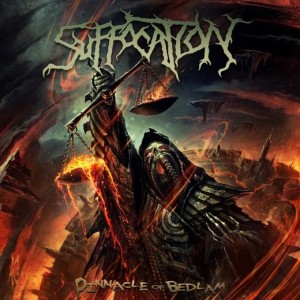 On other news regarding the proposed idea for a tour collaboration with a who’s who in  Death Metal. When reflecting on the history of death metal, there might eventually be a chapter based on what’s known as “The Brutal Big 5.” Taking a page out of the “Big 4″ playbook, the “Brutal Big 5″ would be death metal’s answer to thrash’s very successful pairing of iconic rockers Metallica, Megadeth, Slayer and Anthrax on a package tour.

Suffocation bassist Derek Boyer revealed to The Gauntlet.com that the idea is very much alive, with discussions beginning to get five pioneering bands in the genre together on tour. He explained, “We are talking about doing rotating headlining spots with Suffocation, Deicide, Morbid Angel, Cannibal Corpse and Obituary. We want to get all the heavyweights together and flip-flop and take turns headlining. It will be really fun to get this thing to work out.” 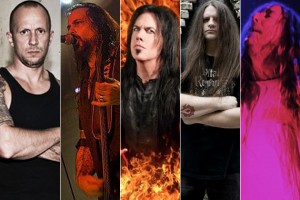 While nothing is confirmed as of yet, the pairing would be huge for death metal fans should it come to fruition and likely a nice payday for the acts as well. Much like ‘The Big 4,’ timing would be the key thing with the bands being able to synchronize their schedules to make it happen.

At present, Suffocation are building up to the Feb. 19 release of their ‘Pinnacle of Bedlam’ album. Deicide’s last album was 2011′s ‘To Hell With God,’ but there’s been talk of a new disc coming this year. Obituary are also reportedly working on a new disc. Cannibal Corpse are still going strong off their 2012 effort, ‘Torture,’ while Morbid Angel could be looking to do something soon as their last album, ‘Illud Divinium Insanus,’ was issued in 2011.

Get “Pinnacle Of Bedlam” now: http://smarturl.it/Suffocation

Also make sure not to miss:
The making of the official “As Grace Descends” video clip –