It’s only taken them 14 years to make their return to Ireland, but last night (Sunday 14th February) the Venice California five piece, better known as Suicidal Tendencies, set the bar for what was possibly, the gig of the year! Utterly, compelling from the start, bursting with a level of energy that would put bands half their age to shame and packed with an abundance of swagger, attitude and feel good, high-energy. They took us to Church…. the “Church of Suicidal”. 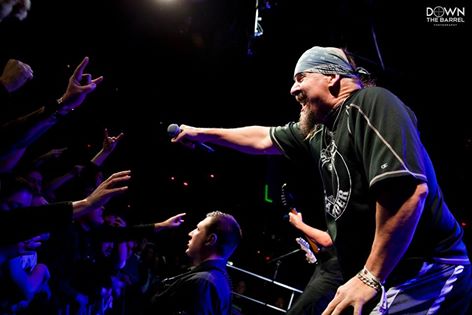 It’s a brisk Sunday evening and as all the local city center eateries are bustling with couples, young and old celebrating Valentines Day, love is most certainly in the air. However, another relationship is celebrating tonight, one that has lasted through thick and thin over the last thirty five years and although these two entities have not seen each other for fourteen of those years, it’s safe to say that no love is lost here! 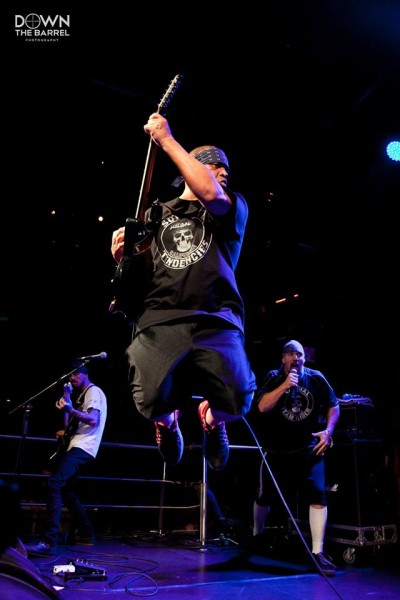 Suicidal Tendencies finally return to Ireland for a hugely anticipated show in Dublin’s Academy and if your were there, you will most likely be waking up this morning covered in bruises with a throbbing neck. Overdrive was there to witness, “Cyco Miko” and the S.T. crew, level the sold out venue.

Considering this is a sold out show, there was an unexpected low attendance for opening band By Any Means. The Belfast hard-core four piece, gave 100% in the hope of striking some kind of connection with the slightly interested crowd. Vocalist Paul Docs, paces the stage like a caged animal and empties his lungs with visceral passion and dramatic urgency, while the rest of the band smash through their short, but engaging set. It would seem that the focus is most definitely on tonight’s main attraction and nothing was going to get in the way of that, regardless of who was opening the show. By Any Means are not trying to reinvent the hard-core wheel and although their set was enjoyable, the connection between band and crowd was just not happening tonight. 3/5

It’s been fourteen years, since Suicidal Tendencies last performed in Ireland and with a now stuffed-to-capacity Academy, they finally bust on stage with a tantalizing extended intro to “You Can’t Bring Me Down”, with the audience in the palm of their hands from the get-go! Guitarist’s Dean Pleasants and Nico Santora, both generate a whirl-wind of excitement from the rabid crowd, with sticks-man Eric Moore, calling for the “S.T.” chant from behind the kit! The place is ready to explode and they haven’t even properly started yet! 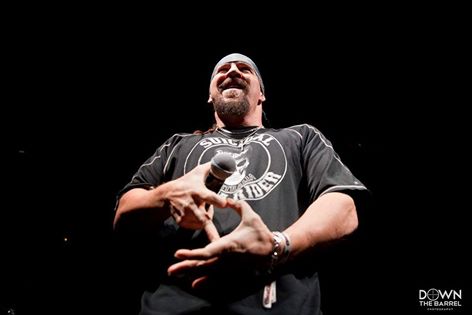 Bassist Michael Morgan gives high-fives from the lip of the stage and before you know it, out bursts “Cyco Miko” aka, Mike Muir and the place just erupts into a frenzy of bodies, crowd surfers and general organised chaos! The Academy crowd are very much in the palm of Mr. Muir’s hands tonight and as they blitz through their back catalogue, it’s impossible not to feel blown away by the bands overall stage presence and in particular, the level of energy that Muir & Co. expels, from start to finish!

New levels of chaos unfold on the Academy floor, with “War Inside My Head” keeping the venue security busy. Suicidal Tendencies 2016, are sounding better than ever and when they drop “Subliminal”, the tornado of bodies that swam the main floor ,threaten to literally crack the foundations of the Academy. “I Saw Your Mommy” generates a united mass sing-along, with bodies a-go-go, passing over the barriers. It’s obvious that S.T. are enjoying every minute of this show and with short bursts of monologue from Muir here and there, they let the music do the talking and proceed to lay waste to the venue.

Their “Lights, Camera, Revolution” classic “Send Me Your Money” is delivered with enough low-end bollocks, that threatens the stacked glasses behind the bar counter and even saw a stage invasion / epic, dive from one of the venues punters, much to the embarrassment of the pit security (how times have changed!). 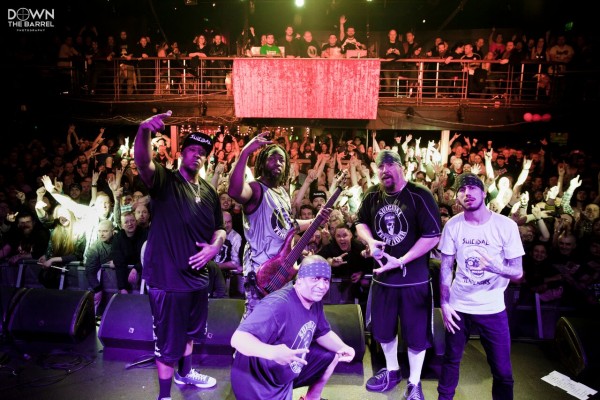 As the band bid their farewell’s and swiftly return again to the chanting for more, Muir thanks us all from the bottom of his heart and promises to return to Ireland in the near future. Their final assault could not be any better, as they open up a can of whoop-ass with the mighty “Institutionalized”, causing all sorts unbridled chaos, complete with random items of clothing, beer and bodies rocketing through the air.

Was it worth the wait? You bet your ass it was! Suicidal Tendencies proved that you only get better over time and with the promise of a return to our shores, you will find me first in line for when the doors open, whenever that may be! Utterly fantastic! 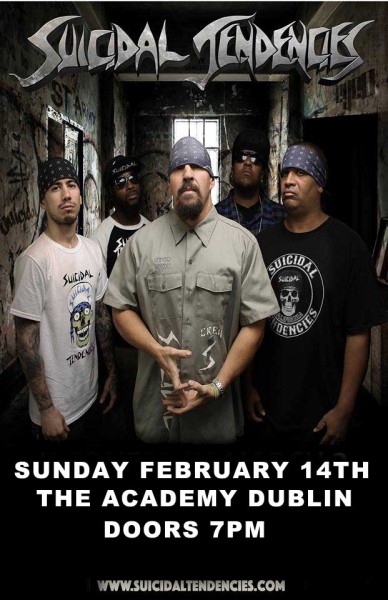