It’s nearly a year ago that nearly two and a half thousand curious Bloodstock punters ventured a dark and musky tent where the now infamous New Blood Stage lies, to witness what is said to be one of the most triumphant performances across the festivals weekend. Overdrive catches up with Ten Ton Slug guitarist to discuss the band’s plans for the remainder of the year, which involves plenty of heavy with extra added heavy! Hup!! 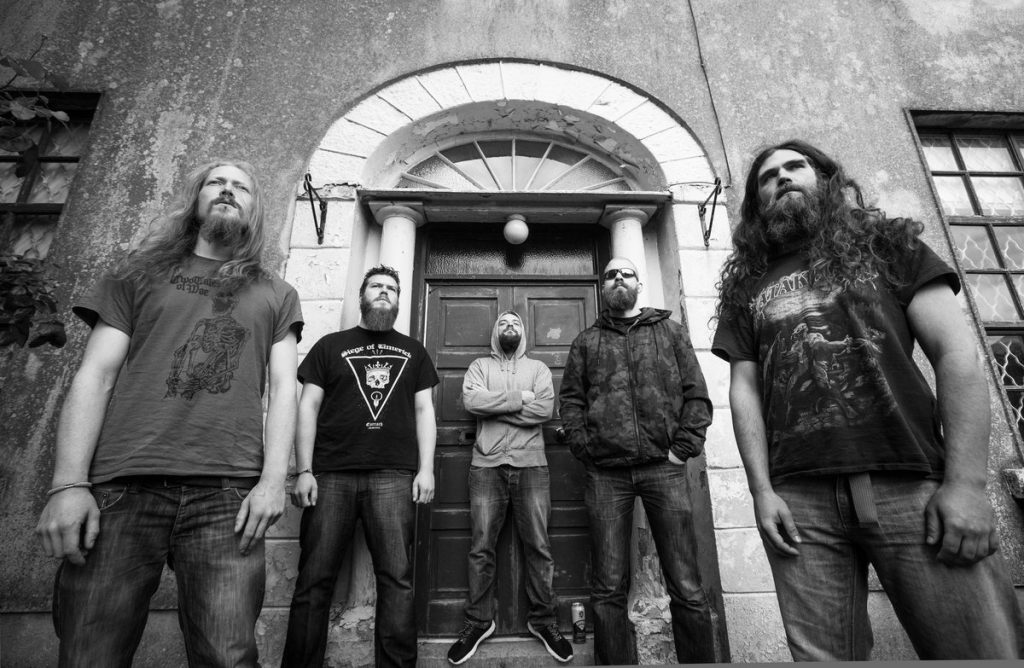 One year on and Galway based doom titans, Ten Ton Slug are preparing for the follow up to their critically acclaimed ‘Brutal Gluttonous Beast’ debut EP with a series of plans that make Hannibal of the A-Team look like a clueless gimp!

Guitarist and Slug commander, Sean O Suilleabhain takes some time out of the studio to talk with Overdrive about the bands new material and when we can expect to get our sticky hands on some new material. 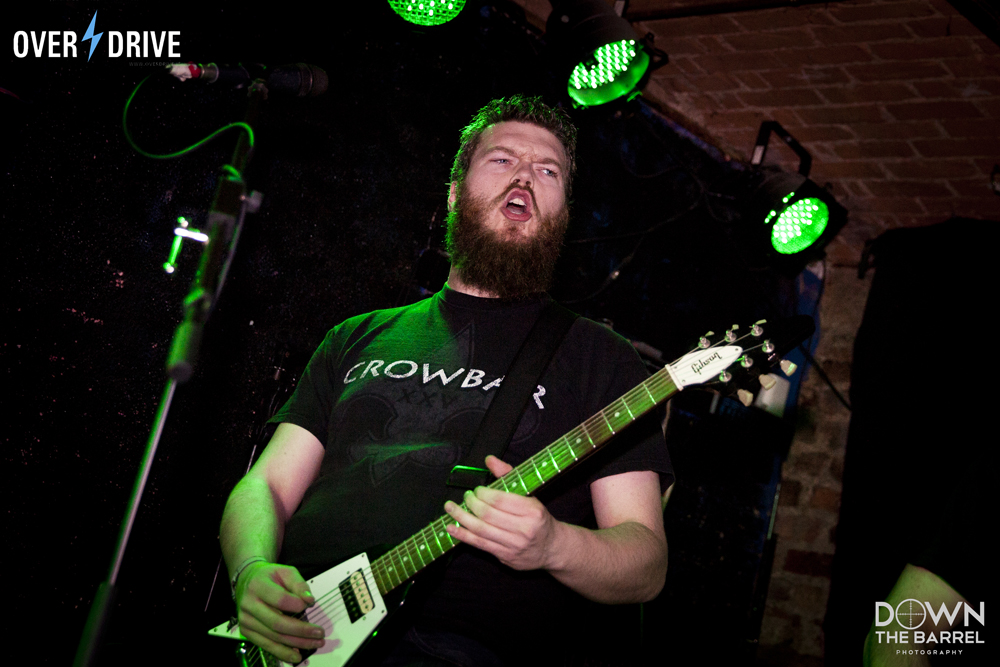 OD – Bloodstock 2017 is nearly upon us and as we all know, Ten Ton Slug were a huge success at the festival last year. Can you tell me what has been happening with the band over the last twelve months?

SEAN – Bloodstock 2016 opened so many doors for us in regards to gigging in the UK and reaching different audiences at home and abroad. Bloodstock pushed us and made us focus more in terms of our identity musically, how we write, our live show and mainly how best to sustain a forward momentum. Our trips over to the UK have been great experiences, the promoters over there are a pleasure to work with.

After having the honour of supporting Crowbar in March we have set ourselves new short and long term goals in light of that experience. It has been a great learning curve with our main aim being progression! 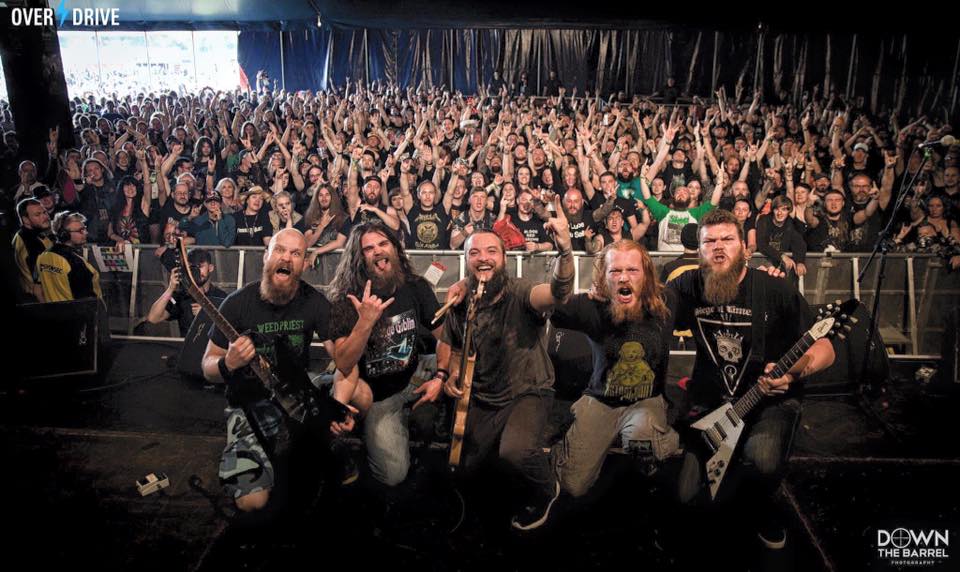 OD – I believe you have some new music in the mix, can you talk a little about that?

SEAN –  We are currently in the process of recording our next EP, due out later this year. While we are finishing this slab of heaviness we have decided to release a live recording of our performance at The Siege of Limerick which will be coming out this Friday, July 28th. It’s limited to 40 CD’s and it features two previously unreleased songs which will be a great way for people to hear some new music before the Full EP comes out. 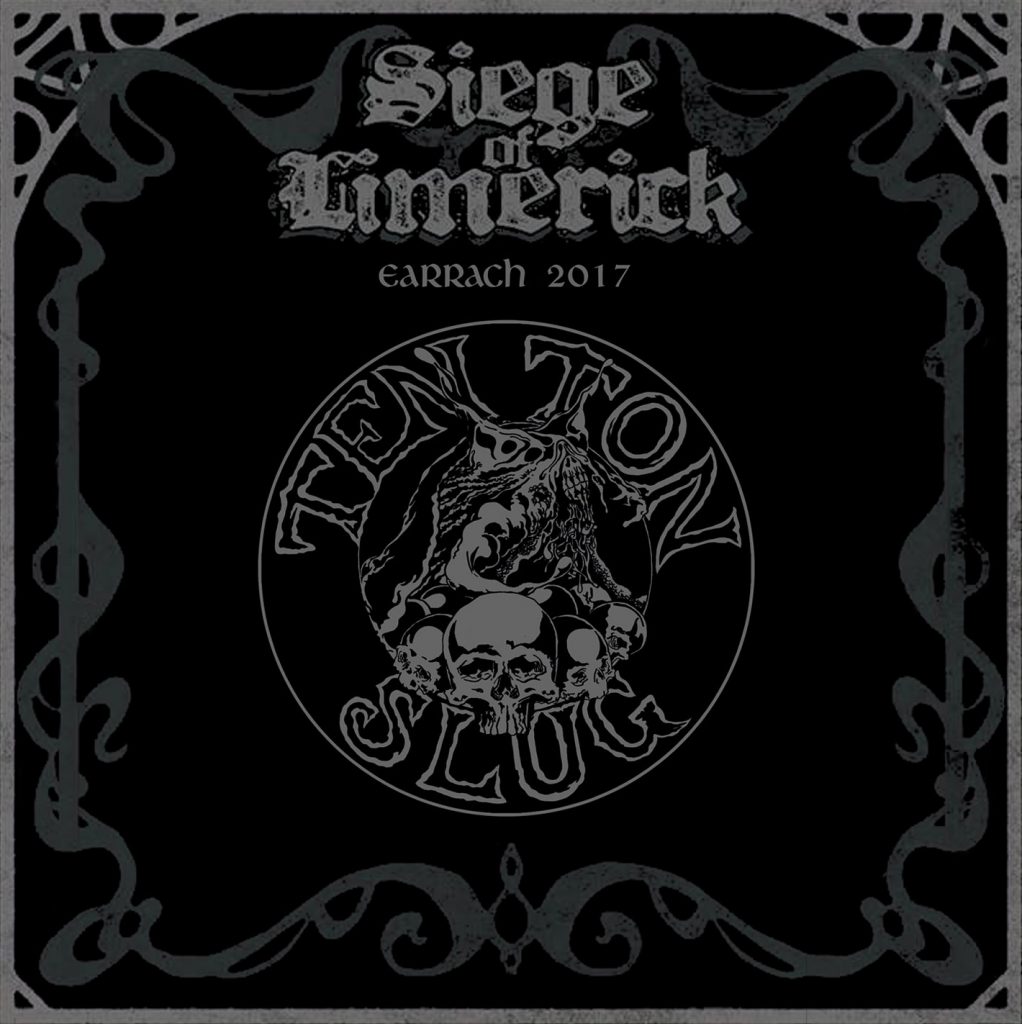 Songs on “Live on the Seige” are as follows:

OD – In light of all the events that have happened over the last year, what would you say has been a big eye opener for you?

SEAN – From all the different places we’ve played, both at home and in the UK, it is the sense of community and support which stands out the most. The promoters and bands we’ve shared a stage with who have become good friends. It’s surprising how helpful people and what great advice they have if you just take the time to ask. Hard work is valued and we have seen bands accomplish great things with the right mentality.

OD – Having had the pleasure of opening up for Crowbar, there seemed to be a great reaction from Kirk (Windstein, Crowbar vocalist/guitarist) and the guys. Did they hang out with you guys much over the few days you were on the road? 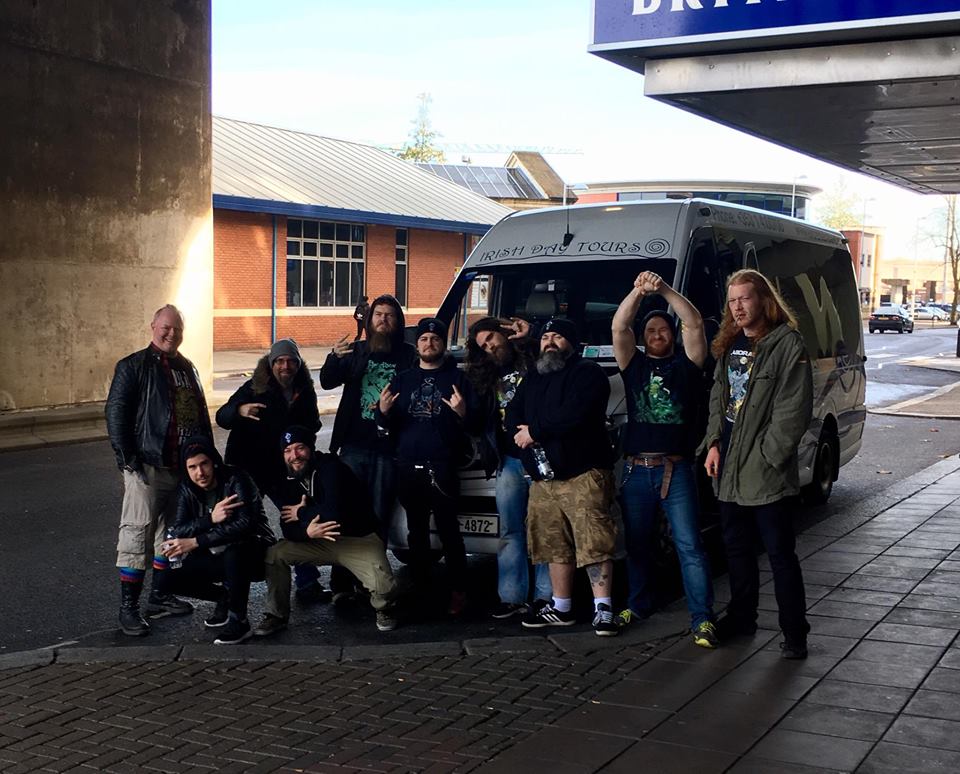 SEAN – The first night when we played Dublin’s Voodoo Lounge we had the chance to hang out back stage with the guys before our set. In Belfast they all made it down for sound check which was really cool, they are all down to earth people who are easy to talk to. Robin (Dubroc, Windstein’s wife) was also really good Craic to chat to and have a laugh with.

The highlight of the gig was seeing Kirk wearing the ‘Woeslug‘ t-shirt [sic] designed by our own bass slug Eoghain Wynne along with Kelvin Doran (Serpent Tusk Studios). Kirk gave us and Two Tales of Woe a shout out as being worthy support bands which was just amazing to hear. We can’t leave out the epic tune ‘Planets Collide‘ where Carl (King – Two Tales of Woe vocalist) joined Kirk and the guys on stage and absolutely killed it! 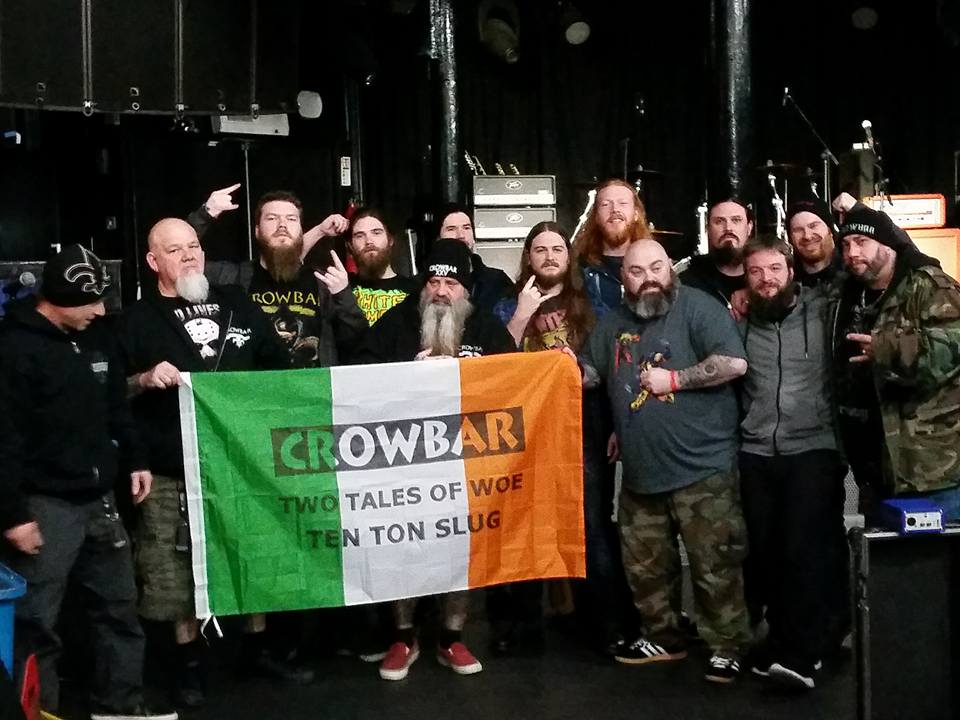 We did accidentally break the tail light on their van helping them load their gear which wasn’t our finest moment, but as a whole, it was an amazing experience!

OD – We have had a taste of some new TTS material with ‘Matriarch of Slime‘, would this be a good indication of what we can expect from the current writing sessions?

SEAN –  ‘Matriarch of Slime‘ is it’s own beast and is definitely a good indication of where we are going musically. We are very proud of and excited about the route we are taking with the new EP. Hard hitting, full of riffs and groove!

OD – Do you have a title and release date for the new EP?

SEAN – We are aiming for a late October release. During the current recording session, there are loads of new ideas emerging for a title. We haven’t settled on one yet.

OD – Regarding the writing sessions for the EP, would it be a collective input or are there any particular members that would bring the ideas to the table?

SEAN – The writing for this EP is a collective effort. All songs are born through trial and error in the jam room and tested on the road.

OD – With a flurry of UK dates over the year, there is no doubt that the band has been kept very busy. Do you have any plans for the remainder of the year for shows that you can share with us?

SEAN – We have taken a break from gigging for the next while to focus on the EP, however, we are confirmed for The Emerald Haze Festival on the 1st-2nd of September which will see us on the same bill alongside Solstafir, Belzebong, and loads more Irish and international bands, click here for tickets. We can’t wait as it’s going to be a great two days of fuzzed out tunes in Dublin. Then later in September, we share the stage with The Crawling for two dates: Cork on the 22nd with Zhi Ren and Slung from a Tree, then Galway on 23rd with Stonecarver.

November 17th we are supporting Jinjer in Limerick. We will be announcing more dates soon around our EP release. 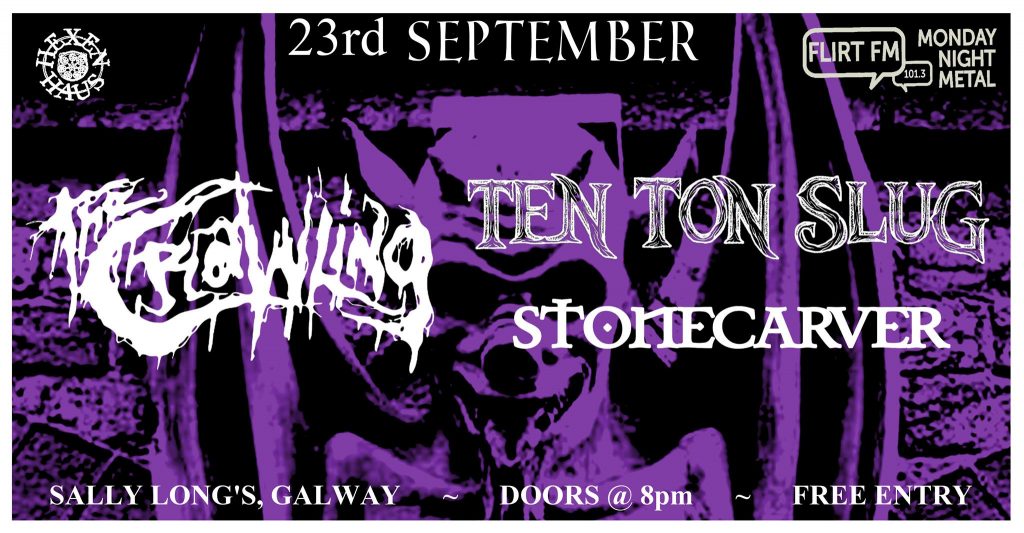 OD – It’s very obvious that TTS are a very hard working band, do you find that this business requires that type of perseverance in order to achieve results?

SEAN –  Perseverance and hard work are essential in achieving any goal you set for yourself as a band. There are often set backs and unexpected delays that come up and test you but hard work and drive are needed to find a solution and overcome any obstacles.

OD – You will be bringing out a live recording of your performance from this years  Seige of Limerick. Do you have a release date for that and also, are you planning to release it as a physical format or just digitally?

SEAN – ‘Live at the Siege‘ will be released this Friday, limited to 40 CD’s containing two new songs, numbered with hand-drawn custom Slug art inside the inlay of each CD drawn by each of the Slugs. There will be 20 bundles available with the CD and a new embroidered Slug patch and another 20 CDs by themselves.

Keep in eye on Ten Ton Slug’s official social media platforms for your chance to win a copy of the live CD and patch. 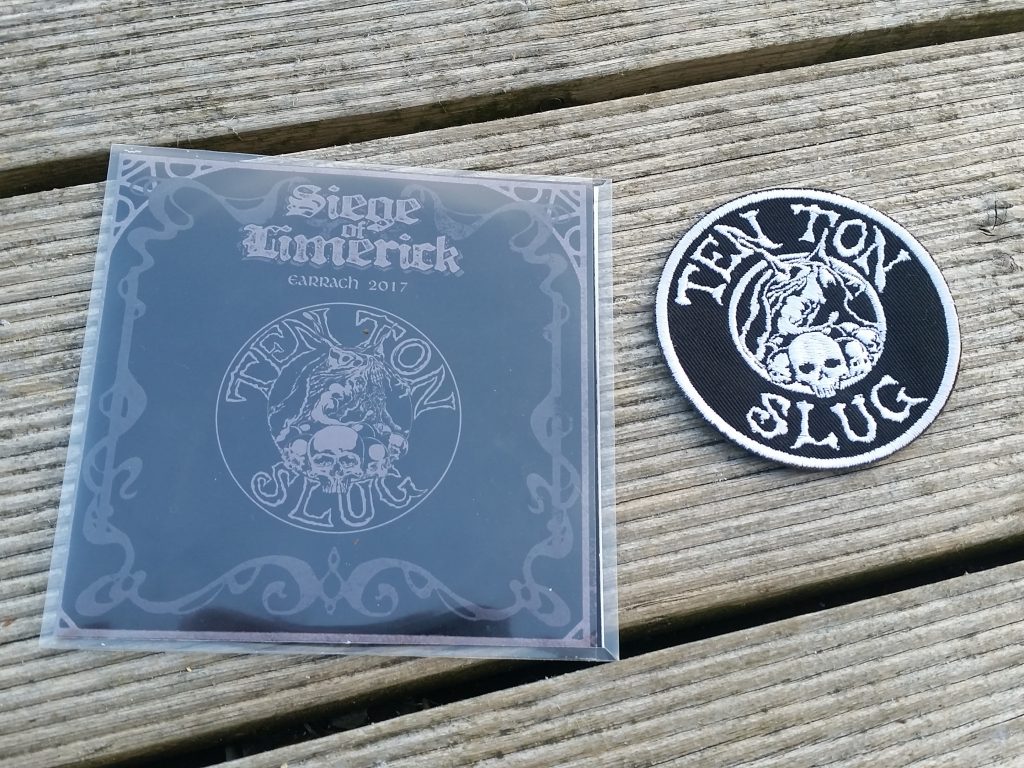 Irish Metal Archives will stream 3 songs this week as well as a stream on our Bandcamp page. Keep an eye on the Slug page for updates and the chance to download one of the songs.  The two new songs will only be available on the physical release, which we will not be doing a second run of.

OD – In an ideal world, what would you like to see happen for the band in the next year?

SEAN – Ideally we would love to get back to Bloodstock, and to play Desertfest and other European festivals like Roadburn and Resurrection Fest to name but a few!  Another support slot like Crowbar again would be unbelievable! A longer UK tour is in order along with hitting up Europe too, regardless of what else happens! The Slug is hungry!

Listen to ‘Brutal Gluttonous Beast‘ on the link below;

Bloodstock photo- Down The Barrel Photography © 2017