EHT Promotions, a well-established local organizer of heavy metal events in Dublin, are thrilled to announce details about the 2014 UNLEASHED FESTIVAL. The annual event, which launched in style last year with headlining performances from GAMA BOMB, OVEROTH and DEATH OF A SALEMAN, is coming back this September. Last year’s event was massive success and gave Dublin one of its most prominent forum to showcase up and coming Irish and English heavy metal groups in a professional setting. 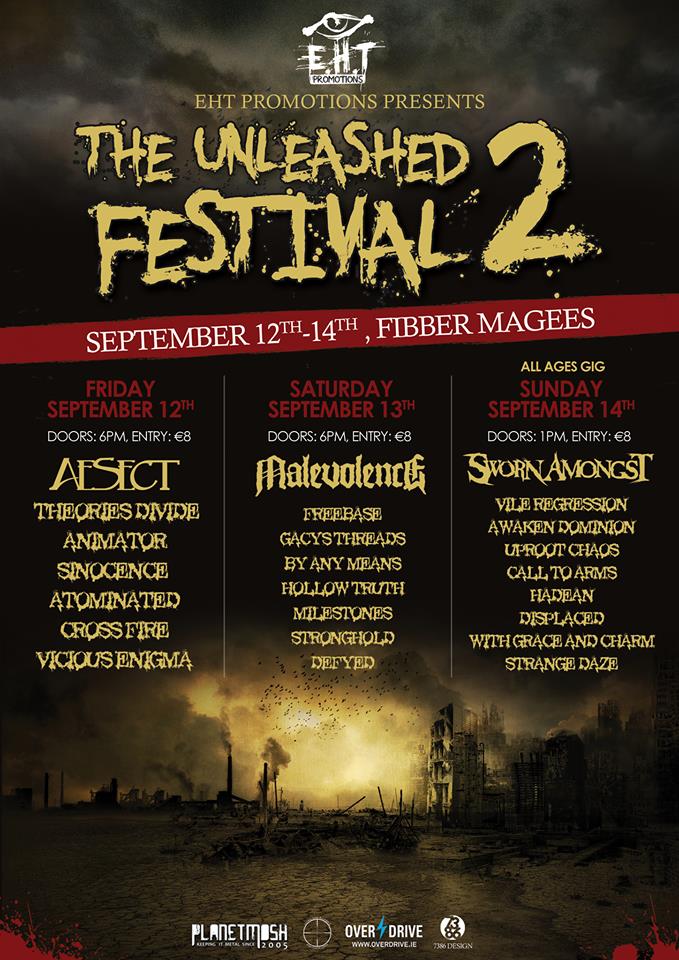 After a tremendous debut last year, the now infamous Unleashed Festival is back, with a bigger line up, that will no doubt take a layer or two of skin off your face!

This year promises to be even more unforgettable as EHT has lined up some of the most exciting names from metal today including SINOCENCE (Belfast, NI), MALEVOLENCE (Sheffield, UK) and SWORN AMONGST (Hull, UK) – each one heading up line-ups packed with local talent – including the excellent AeSect, Vile Regression, Gacys Threads,By Any Means , Hollow Truth, Animator, Atomninated and many more.

The festival will cater to all metal fans, with a special focus for fans of thrash, death and hard-core. Younger fans won’t be disappointed to find out that Sunday, September 14th is a special, all-day underage gig so nobody will feel left out.

Tickets are priced €8 for each date and they’ll be available on the door each night. Shows on September 12th and 13th will kick off at 6pm while the underage show on the 14th will begin at 1pm.

So, lets take a look at what to expect from some of the headliner acts for this year.

With many bands taking on an abrasive screaming approach Sinocence focus on their solid song writing skills and intense rhythm section and what sets this band apart from their contemporaries however are the soaring and emotional vocals of frontman Gareth Morrow. The band in turn, has stepped up to reinvigorate the dynamic and energetic sound the public have come to expect from Sinocence. If ever there was a coming of age of a band this is most definitely it!

Being based in Northern Ireland, reaching any kind of musical status can be an exhausting task. Undeterred, Sinocence have gone from strength to strength with their collective drive, determination and cast iron will to succeed. As a self-financed act, the band have managed to lead a productive musical life and have achieved worldwide distribution with Casket/Co-Pro, Rising and Metalbox Records.

On the live circuit Sinocence have been making one of the biggest noises in the Irish underground. The band have been playing in a thriving Irish scene for over 12 years and have secured endorsements from Peavey and Trick Drums. With fans chanting their name in venues throughout the country the band forge ahead of others by consistently touring. Supporting heavyweights such as Machine Head, BFMV, In Flames, Lacuna Coil, Soil and W.A.S.P. The band also secured tour support to Staind, Prong and Paradise Lost in Ireland. In tandem with this, Sinocence also have gained slots at the UK festivals Bloodstock and headlined the 2nd stage at the Bulldog Bash.

Sinocence will headline the Unleashed Festival on Friday, September 12th, 2014

MALEVOLENCE are one of the UK’s fastest rising crossover bands. After releasing a two track demo, which caught the attention of every hard-core and metal kid in the North of England, it was only a matter of time before the ripples Malevolence were creating would turn into nationwide tidal waves.

The band’s reputation for explosively heavy live shows and some of the most devastating pit action this side of hell resulted in shows with the likes of Hatebreed, While She Sleeps, Vision Of Disorder and The Acacia Strain.

Their recent video to a pre-production version of album track ‘The Serpent’s Chokehold’ can be viewed below!

Like a bastard hybrid of Pantera, Biohazard, Hatebreed, Life Of Agony and Lamb Of God, Malevolence’s sound is remarkable in its influences given the band’s average age of 20.

Malevolence will headline the Unleashed Festival on Saturday, September 13th, 2014

SWORN AMONGST: Since forming in 2003, Sworn Amongst has steadily built a fan base with their studio release and their brutal live performances. After 2005’s independently released debut Derision of Conformity, Sworn Amongst caught the eye of metal label Rising Records who signed them in 2007. The band headed into the studio to record And So It Begins which was well received by fans and critics, with Metal Hammer calling the album “A massively promising & accomplished debut.”

Over the last eighteen months, the band has taken part in several European and UK tours, with the band terrorising more than 150 venues in nearly fifteen countries. Sworn Amongst’s tours include Earache’s 2008 Thrashing Like a Maniac Tour, Breed 77 and Susperia’s Insects & Attitude Tour in 2009 and their own 2009 headlining And So It Begins Tour with 105 dates across the UK and Ireland. They have also played the prestigious UK festivals Bloodstock and Hammerfest as well as Spain’s Thrash Em All Festival and Germany’s Wurzburg Metalfest. Its these experiences on the road that have seen Sworn Amongst evolve and forge ahead with their brutal new approach.

Sworn Amongst will headline the Unleashed Festival on Sunday, September 14th, 2014

Other acts over the weekend will include, Bloodstock Metal 2 The Masses finalists, AeSect and Theories Divide as well as Call To Arms, Vile Regression, Animator and many, many more.

Tickets and information for Unleashed Festival 2 can be accessed here.