UPRISING – A night of neck-breaking, horn-throwing metal in Leicester!


Whoever said that our beloved metal scene is drying up and dying along with the major pioneers of the genre, can eat their hats! A great example of the flourishing underground scene, can be witnessed at this rather fine line up of bone crushing bands which have just been announced for “UPRISING”, a celebration of all things metal! Get all the details below! 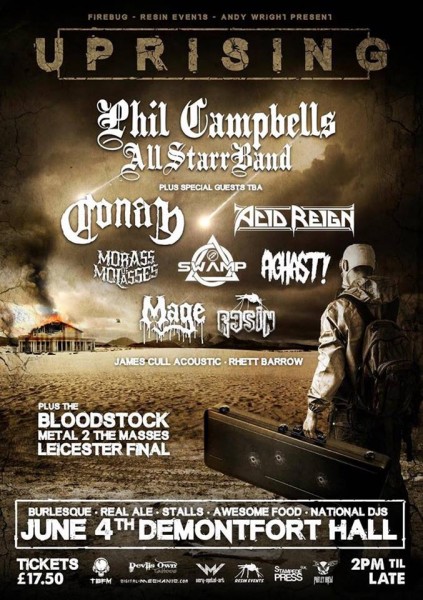 Resin Events in association with Firebug & Andy Wright, present UPRISING – A full day of metal over 3 stages featuring a host of the heaviest bands on the touring circuit, along with the final of the East Midlands Bloodstock Metal 2 The Masses. 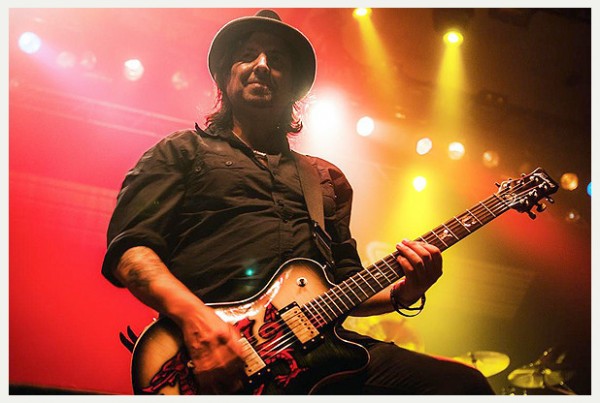 Motörhead axeman Phil Campbell will be bringing his All Star Band to headline the event with a barrage of Rock N’ Roll classics along with Motörhead tracks as we raise our beers to the late great Lemmy Kilminster … anyone remember 2013 when Phil and the band played “Killed By Death” on the Bloodstock Jagermeister Stage?

Madmen Acid Reign are back in action! After a lengthy hiatus and after a monumental return in 2015 they’re set to bring their brand of obnoxiously humorous Thrash back to Leicester. Time to get ya Thrash pants back on kids!

Quite possibly the heaviest band on planet earth Conan will destroy all in their path. With primal monolithic tones guitarist Jon Paul Davis, Bassist Chris Fielding and drummer Rich Lewis will leave the De Montfort Hall in a state of euphoric doom!

Swamp Delta Featuring Robber Byker of Gaye Bikers on Acid and Screaming Delta Anderson, The Porkbeast, Denizen Blink Cyclone and not forgetting Rob Vomit all formerly of Crazyhead, Swamp Delta are a 21st century Urban Bastard Blues Band from South Wigston Swamp Delta Zone. this promises to be something special.

The band that puts the X in Extreme Metal, Aghast are a four-piece extreme metal band from London, formed after a drinking competition and subsequent visit to the medical tent!
With their full on show this promises to open up the pit and lay down a barrage of force!

Reading based Morass of Molasses bring a warmth of sludge based swamp blues that’ll render you void of controlling your limbs as you involuntarily bang your head and sway to the hypnotic sounds. Not to be missed.

Leicester based Mage are local heroes and a true testament to band brotherhood. With 3 full releases to date and an army of support for their stoner/doom sounds they have vowed to remain “Goddamn Heavy” in honour of the recently deceased guitarist Ben Aucott. Blaze up and come worship at the alter of the mighty Mage.

THE BLOODSTOCK METAL 2 THE MASSES

Taking place from 3pm this will see the finalists battle it out for a coveted slot at this years Bloodstock Open Air Festival. Playing on the Hobgoblin Newblood Stage this offers bands a massive leg up to be seen in front of so many metal-heads, to network with media and bands from all over the globe and to reach the next level for the band. Not only that but they get to play with acts such as Slayer, Anthrax, Mastodon, Behemoth, Twisted Sister, Gojira and loads more …

With heats being held at The Firebug throughout the build up why not get along and see who the contenders are .. THE COMPETITION IS FIERCE!

Feeling the energy of later day giants such as Alice in Chains and Stone Temple Pilots – Resin are a 5 piece that offer this and so much more. With their unique twist on the 90’s grunge vibe their music is perfectly suited to an acoustic setting. Emotive and always looking to expand boundaries Resins headline set promises to be one of the highlights.

James Cull & Rhett Barrow will also be bringing their acoustic flavours to the stage.

Tickets £17.50 from DMH, Firebug and Resin Events –here on this link :

One day of Metal not enough? Try the Firebug Friday Warm Up Show.
Event details on this link.

Spread the word – The UPRISING is ON!!