With their crushing new album ‘Titans of Creation” released last Friday, we thought it only fitting to let Testament guitarist, Eric Peterson shed some light on his Black Metal-themed new comic book ‘The Burner”. Watch the exclusive video below… 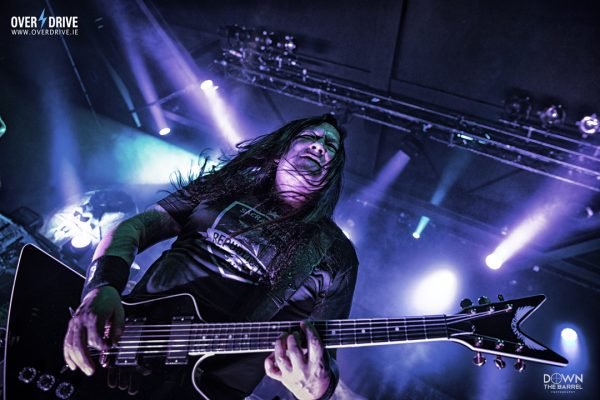 © Down The Barrel Photography, exclusively for Overdrive.ie © 2020

Not content with penning some of Thrash Metal’s most iconic riffs, Testament shredder Eric Peterson has also been busy with his very own comic book, a Black Metal inspired tale entitled ‘The Burner“.

During their recent run of shows across EU and UK with Death Angel and Exodus, Overdrive caught up with Peterson to find out a little more about the project…

Titans of Creation was released worldwide last Friday and is available to purchase via Nuclear Blast (see link below) and can be found on all major streaming platforms.

Get the full feature interview with Eric Peterson here.

The band recently released a new animated video for ‘Children of the Next Level‘ which you can watch below;

Chuck Billy comments, “Being so busy with touring, we weren’t able to schedule a video shoot and thought we’d try something different and came up with a killer animated video for the song ‘Children Of The Next Level’. With the song being about the Heavens Gate cult, we thought it would make for a good visual story. It takes a lot of time and effort to make animated video and it was really cool to watch the process as it came to life. i think it came out awesome.”

Eric Peterson states, “Watching clips as it was being put together was exciting, but after seeing it for the first time from beginning to end, its hilarious as hell and lots of fun to watch. It sticks to the storyboard of lyrics while remaining very entertaining to watch and much more, I think even nonmetal fans will love this too!”

Order your copy of Titans Of Creation on the format of your choice here: