Progressive Electronic, Experimental Rockers RESTIVE NATION delve into the darkest corners of the human mind with their epic new video for ‘Descent’.

Taken from their critically-acclaimed ‘Lucidum’ EP which was released on June 12th, the 7-piece have crafted a sensational experience both in sound and vision with their latest offering – ‘Descent’.

Check out the epic visualiser below;

Restive Nation not only creates an atmosphere but a sub-level universe of sound, thoughtful intelligent lyrics and ideas that help the listener to ‘free-fall’ and move through genres and concepts.

Swelling with talent and refreshing brilliance, ‘Descent’ follows the previous ‘Coma’ single [listen below] with a different blueprint but all the while encompassing the bands’ ethos to push boundaries and venture into the horizon with rigid confidence.

Commenting on ‘Descent‘ the band said:

“Descent is an atmospheric piano-led tune with a rhythmic chorus that climaxes in a crescendo of screeching synth and abrasive guitar work. The track influences are rooted in Nine Inch Nails (With Teeth/Year Zero era) and Massive Attack.

The song was written about an acid trip taken with friends and watching people’s appearance change as they descend into their inner consciousnesses on a journey of self-exploration.

The song begins as the effects slowly take place with an initial fear and trepidation that gives way to a chorus of warmth and safety with the desire to trust in the experience and explore even deeper.

The story progresses as the traveller realises that there is nothing to fear and to take insight from what is happening. The finale is full acceptance and crossing over, a willingness to abandon old trains of thought for something more profound. The song ends in a rapture of euphoria as the traveller has gained a new, insightful perspective.”

After spending months searching for a vocalist to no avail, they decided to do the unthinkable – to have guest vocalists collaborate on different tracks to complement their expanding sound.

Through 2016 and 2017 they gigged extensively before quartet then became a trio and released four well-received singles, each completely different from the last, owing to

collaborations with diverse vocalists; from the tribal infused eastern tones of ‘It’s Just a Skull…’(feat. Siobhán Kavanagh), to the ambient grunge of ‘The Nihilist’ (feat. Dave Byrd), then leap into the complex progressive wormhole of ‘Cliff’s Edge’ (feat. Atmahead) and land yourself in the thick of it with the contemplative brooding ‘Murmur’ (feat. Dave Lee), it seemed that no territory was untraversable for Restive Nation.

2018 witnessed the band breaking new ground with their first-ever music video for ‘The Future’ followed by the release of their debut EP ‘We Atrophy’. The EP showcased some extremely promising potential and featured an array of different guest voices as well as instrumental tracks.

In late 2018 the band reached new heights with their rendition of Mike Oldfield’s intro to ‘Tubular Bells’ complete with a hilarious parody video of ‘The Exorcist’. The band finished out the year in triumph opening for Mortiis.

2019-2020 has seen the line-up swell from a trio to a septet with the inclusion of a synth player and 3 permanent vocalists.

With this new line-up, they released their 2nd EP entitled ‘Lucidum’ on June 12th featuring lead single ‘Coma’ and now the captivating ‘Descent’. 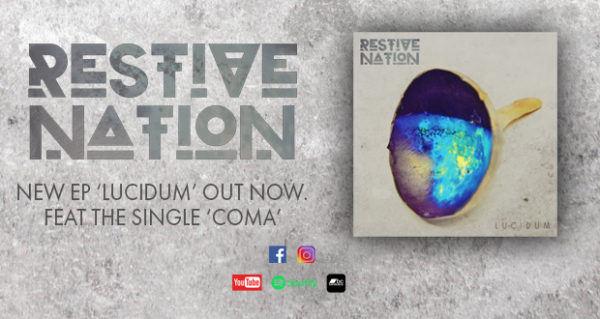