80’s inspired progressive synth-metal project THE ENIGMA DIVISION has today (Friday, June 5th) dropped another new single from their forthcoming new album, which is due for independent release this September.

With a huge reaction to last months single ‘The Neon Mirage’, today The Enigma Division has unveiled another track that is bursting with glorious 80’s -inspired soundscapes woven through a technically exhilarating progressive metal landscape.

We spoke to Conor (McGrouran, former Xerath guitarist and founding member of The Enigma Division) about the inspiration behind the track and his obsession with the 1980s…

OD – ‘Afterglow‘ is the second single to come off the album, can you tell us a little about the background/concept to the tune?

CONOR – The song grew out of an idea I had in 2015 which was the keyboard intro. I tend to write a lot on keyboards.

With both guitar and keyboards, I record little snippets, like; ‘That’s a cool riff or chord progression”. A lot of that ends up being the inspiration for a song or a specific part/arrangement, and so that’s how a lot of the creativity happens.

In this case, I had recorded that intro and had an idea for a song that had an 80’s nostalgic Synthwave feel and aesthetic but I wanted to combine that with a King’s X type heavy groove in terms of where the downbeat lands etc.

Then over that time Ronan (Burns: Bass/Synthesizers) and I, with lyric contributions from Will (Young: Vocals), morphed it into what it is now.

OD – Do the sequence of singles follow as per the tracklisting on the album and if not, why did you pick ‘Afterglow‘ as the follow-up to ‘The Neon Mirage‘(see below)?

CONOR – They don’t. We kind of want each single to have a distinct feel. ‘Neon…‘ shows a vague overall arch to what we do but ‘Afterglow‘ shows more of our synthwave and 80’s film score influences, which we worked very hard at integrating with our progressive influences and hopefully made it sound fresh and interesting.

It was also great to work with my old bandmate Rich (Thomson) from Xerath (pictured below) who provided vocals as I kind of had him in mind when I was writing it. It’s rare when someone gets the brief and is somehow able to tap into your head and deliver something better than what you intended. 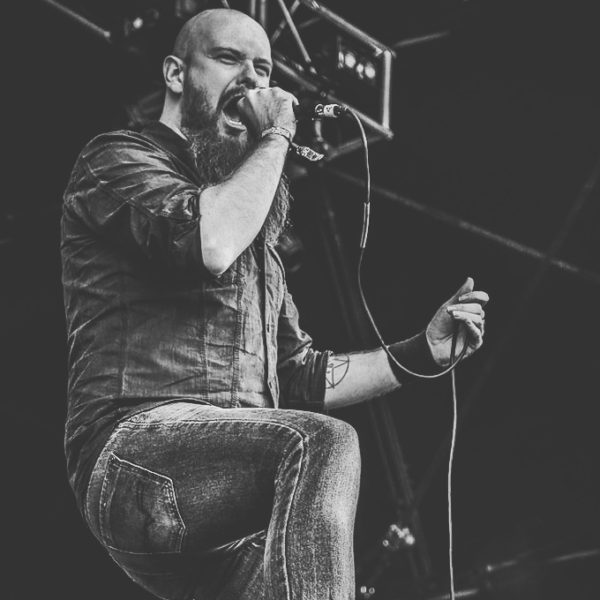 OD – We’re noticing a very consistent flow of images that are very 80’s driven. We’re assuming that this is a hugely impressionable genre for you both aesthetically as well as the pop culture?

CONOR – Very much so. I guess that’s due to growing up in the ’80s and also a lot of my favourite movies and bands came from that era. I would say though, 80’s movie scores of films by the likes of Vince DiCola, Brad Fiedel, John Carpenter, Vangelis, Tangerine Dream etc would be probably our biggest source of inspiration.

OD – Speaking of the ’80s, what do you consider to be the greatest 80’s Movie and also the best soundtrack from that genre/era?

CONOR -Great question. That’s tough. I guess the obvious like The Terminator, Blade Runner, Robocop, The Thing. With the exception of Robocop, they all had synth-based scores which I guess was proto-synthwave so the scores really added to the tone of each of those movies.

If I have to pick just two that influenced The Enigma Division directly, I’d have to go with The Terminator and Blade Runner.  One is impossible [Laughing].

OD – We are two singles in, when can we expect the next single and can you tell us the title?

CONOR – The next single will be called ‘Clarity‘ but we’ll also have a few more surprises before September!

You heard it here first! Stay tuned for The Enigma Division’s debut arrival. Keep up with the bands’ activity via this link.