Legendary Thrash crew Vio-Lence has inked a worldwide deal with Metal Blade Records and are currently working on a new album. Get full details below;

With the news of Vio-Lence confirmed for this year’s Bloodstock Festival being announced live on stage at last years BOA, the anticipation of the elusive Thrash masters has been at an all-time frenzy and today, the confirmation of the bands new home at Metal Blade Records only confirms a new album is on the way!

Vio-Lence was born in 1985 in the womb of thrash metal’s inception: San Francisco’s East Bay Area.

With a ferocious blend of blazing guitar riffs, relentless rhythm, and an ultra-aggressive vocal style, they have an intensity unmatched in metal.

After disbanding in late 1993, their music and legacy still drew metal-heads from around the world. Their return to live performances began in mid-April 2019 and they haven’t looked back.

Metal Blade has been involved in thrash metal since the beginning with their compilation ‘Metal Massacre’, and they have stood the test of time because of their love for heavy music. Thank you, everyone, at Metal Blade Records for believing in Vio-Lence and for being fans of the music I love.”

Scheduled to tour internationally in 2020, Vio-Lence is ready to tear it up around the world doing what they love most: playing music for their incredible fans.

Catch them make history for their very first UK debut at this year’s Bloodstock Open Air Festival along with the mega-line up you see listed on the graphic below. 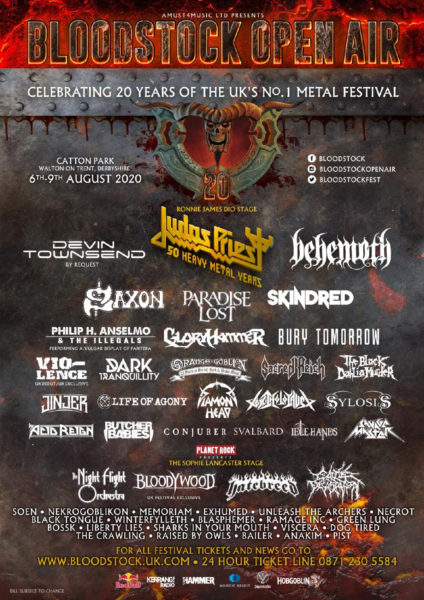