Metallica made their first live appearance of 2021 on a special Super Bowl edition of The Late Show With Stephen Colbert. 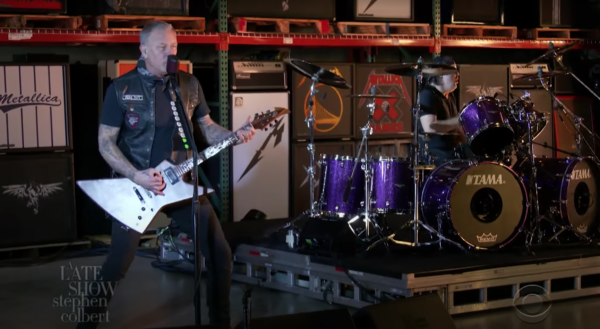 The band closed the show with ‘Enter Sandman’, recorded at their Northern California HQ.

It was their first live appearance since their All Within My Hands Foundation Livestream in November 2020, which raised over $1.3 million.

As an Easter Egg to fans, the performance featured speaker cabinets from past tours and videos in the background, including the Death Magnetic and St Anger tours.

Lars Ulrich recently admitted that progress on the follow-up to Hardwired… To Self-Destruct was progressing at a “glacial” pace. Speaking to Classic Rock, the drummer said: “These are the craziest of times and nothing is letting up. There’s a little bit of movement [in that direction], but it’s hard to do a lot when we’re not together.”