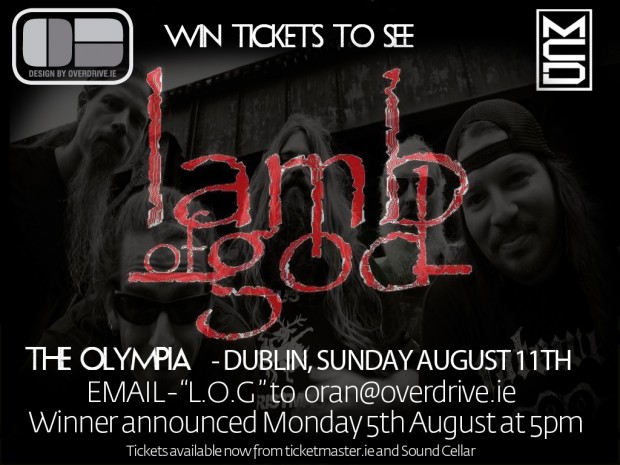 OVERDRIVE has got together with MCD to give you lucky bastards a chance to win a pair of tickets to see the mighty and most defiantly awesome LAMB OF GOD play a one off show in Dublin’s Olympia Theater on August 12th.

The last time LOG played Dublin was just after last years Download Festival where only a few day’s later the bands spokes person and most recognisable face of the band was arrested in charges of manslaughter following the tragic death of one of their fans in Prague.

After spending almost three months in jail and a small fortune in legal fee’s the Metal world rejoiced at the news earlier this year that Randy had been cleared of all charges against him.

The band are more than ready to hit the road again in support of their short lived touring schedule for the bands latest release “Resolution” which dropped in January of 2012.

For your chance to win a pair of these tickets all you have to do is email “L.O.G” to oran@overdrive.ie with your name and the winner will be selected on August 5th at 5pm.

Tickets for this show are practically sold out so if you are planning to go you can either enter and hope that you win or head over to www.ticketmaster.ie or drop into Dublin’s most kick ass Metal/Rock record store Sound Cellar .