The epic memory of Overkill standing on stage in The Academy in 2014, still gets the hairs on the back of the neck pointing skyward. Upon hearing that the New Jersey ‘wrecking crew’ are heading back this way, with the one and only Vader as guests, has got to be one of the most metal shows of the year in our opinion! If you’re interested in winning tickets this this bone-crushing spectacle, then keep reading….. 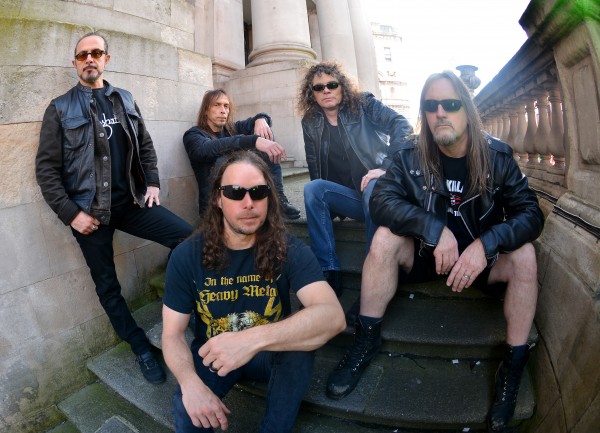 New Jersey’s thrash legends Overkill are set to embark on an eight date tour across the UK and Ireland in April with label mates, Vader. In celebration of the run of dates, the band has revealed a track video for ‘Down To The Bone’ which you can view below!

The band are scheduled to enter the studio in early May to begin recording their 18th album for a tentative October 28 release via Nuclear Blast. Eleven songs have been written and demoed so far for the follow-up to 2014’s “White Devil Armory”, which stayed true to the bands break-neck thrash assault!

There is some contention as to the beginnings of Vader, but the truth is that they began in the autumn of 1983 by Piotr ‘Peter’ Wiwczarek (‘Bardast’ and later ‘Behemoth’ back then) playing the bass and the guitarist Zbyszek ‘Vika’ Wroblewski. Extreme metal was about to be born in Poland and Vader were among the pioneers of that genre in the newly emerging underground – and the only band from that era still reigning! The first crucial point in the band’s history was their participation in the first Polish heavy metal festival – Metalmania in 1986, where they played to an audience of around 5000 persons.

Vader recorded their first official material in 1989 in Olsztyn which became the 4-track demo ‘Necrolust’. This was their first studio release that reached beyond the Polish borders and earned them some excellent reviews across the globe. They released the demo ‘Morbid Reich’ in 1990 which eventually gained the status of being one of the bestselling metal demos in history. ‘Morbid Reich’ was also the first release to host Vader’s now infamous logo.

Overdrive and Nuclear Blast have teamed up to offer some lucky people free tickets to not only the Dublin Show but also the Belfast gig as well! All you have to do to enter is simply follow the easy steps below! Good luck! 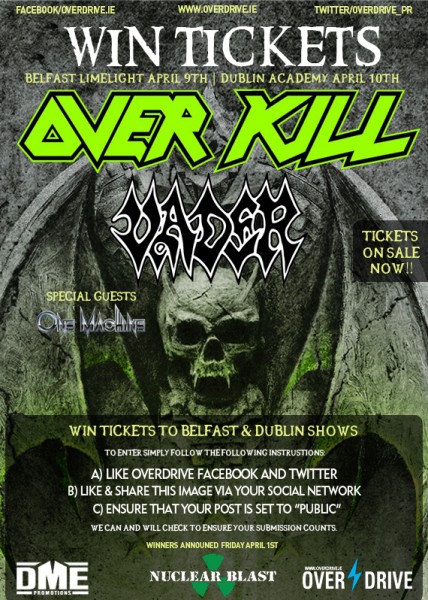