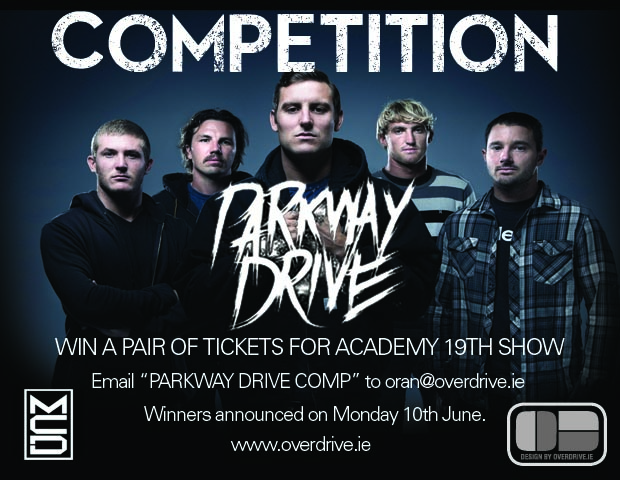 Overdrive and MCD have teamed up to bring you a chance to win tickets to see the guys lay waste to the Academy on June 19th. All you have to do is email “Parkway Drive Comp” to oran@overdrive.ie and winner will be announced on Monday 10th June!! It’s that easy.

Parkway Drive frontman Winston McCall had the following to say about the upcoming tour: “To say we’re excited to be spending the summer in Europe is an understatement. We’re doing our best to pack as much into our time as we can, awesome festivals, crazy clubs shows and some new adventures. For Parkway, summer in Europe is unbeatable!” The band will be playing key festivals – including Download Festival (UK), South-side & Hurricane (Germany), Hellfest (France) and Graspop (Belgium) – as well as club shows throughout the continent including three Irish shows in Dublin, Limerick and Belfast.

Parkway Drive’s fourth studio album Atlas, was released in October 2012 and has received tremendous worldwide acclaim from both fans as well as the key media. Kerrang! Magazine called this chart topping success  “one of the most monstrous and immense albums of the year”, granting it a perfect,  5/5 score, while Metal Hammer stated that with this album, Parkway Drive “have become one of the most important heavy bands of recent years.”

Tickets €25 including booking fee go on sale from www.Ticketmaster.ie and Ticketmaster outlets on Friday 10th May at 9am. This will be an 14+ show – no alcohol.