It’s the news we’ve all been waiting for. Mastodon will be taking to the stage in Dublin’s Olympia Theatre with special guests Kvelertak on Tuesday, January 15th. Overdrive are giving away a pair of pre-sale passes for the show which you can enter in our competition below; 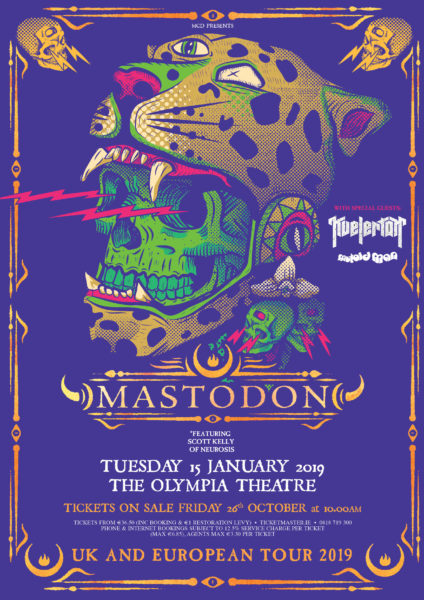 Grammy-Award-winning hard rock quartet Mastodon has confirmed their return to live action with an extensive tour of the U.K. and Europe beginning January 14th in
with an Irish date in Dublin’s Olympia Theatre on January 15th. Support on all dates will be Kvelertak and Mutoid Man.

Additionally, promoters for each show will be making donations to one of the following three charities, The TJ Martel Foundation, Hirshberg Foundation for Pancreatic Cancer Research and Pancreatic Cancer Action Network in honor of the bands’ longtime manager, Nick John, who passed away last month from pancreatic cancer. For further details, visit this link.
Joining Mastodon will be Norway blackened/punk rockers KVELERTAK who last played in Ireland many moons ago as main support to Converge in Whelan’s. This will be the band’s debut Irish performance with new vocalist Ivar Nikolaisen.

Also on the bill is Mutoid Man, a three-piece bone-crushing live band from New York who packs a serious fucking punch!

Check them out below;

Q – What was the name of Mastodon’s last studio album?

Winner picked at random and contacted privately. +18 only.

Tickets are on sale from Friday, October 26th at 1o am.