Win tickets to Uncle Acid & The Deadbeats for tomorrow’s show in Academy 2. 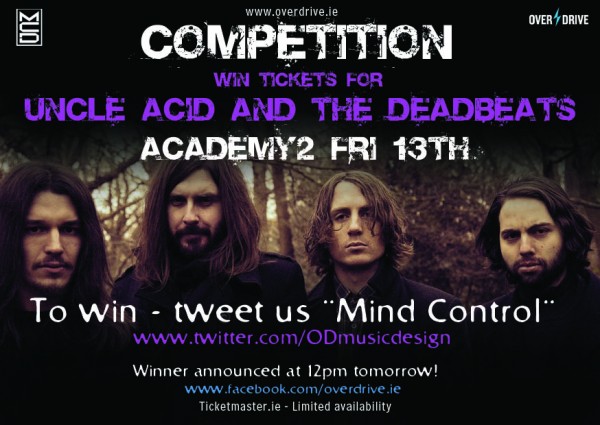 As we have reported in the past, Uncle Acid & The Deadbeats are something to behold and loose yourself in. A very special band that will grace the stage in Dublin’s Academy 2 on Friday 13th (tomorrow) as a special date outside of supporting Black Sabbath. Don’t miss this show!

Overdrive witnessed Uncle Acid, at this years Download Festival and were just slightly blown away with the huge hypnotic sound that these guys can churn out. The band had been personally chosen to support the one and only Black Sabbath on their current European tour and will be gracing the vast stage in Belfast Odyssey arena tonight (Dec 12th).

This is where the good news comes, because unless you have been living under a rock you will no doubt know that MCD announced earlier in the year that the band will be playing a very intimate show in Dublin’s Academy 2 on the very fitting and superstitious date of Friday 13th (tomorrow night!). You can win a pair of tickets so keep reading and get on it ASAP!

With the recent “Mind Control” album having generated impressive reviews on both sides of the pond and their vinyl becoming somewhat of an instant collectors attraction, the final piece in the puzzle for the bands imminent global success was the much coveted support slot for Black Sabbath. This just makes the gig tomorrow night that much more special.

What ever you do do not miss out on this once in a lifetime opportunity to catch Uncle Acid & The Deadbeats in such intimate surroundings. Tickets have been selling and from what we have been told are down to a limited amount.

We have managed to secure a pair of tickets for one lucky punter and all you have to do is tweet us “Uncle Acid” as the content and we will pick a winner by 12pm tomorrow! Good Luck!

“Mind Control” is out now via Rise Above Records.