ZZ Top have been around for a while.  A long while, in fact.  They’ve now reached the point in their career where they can do whatever the hell they like, because when you reach legendary status that’s just the way it is.  So if they want to play a stripped back show, fill the set with covers, have the guitar tech join the band, show off some synchronised dance moves, wear glittery jackets and play fluffy guitars that’s what they’ll do. 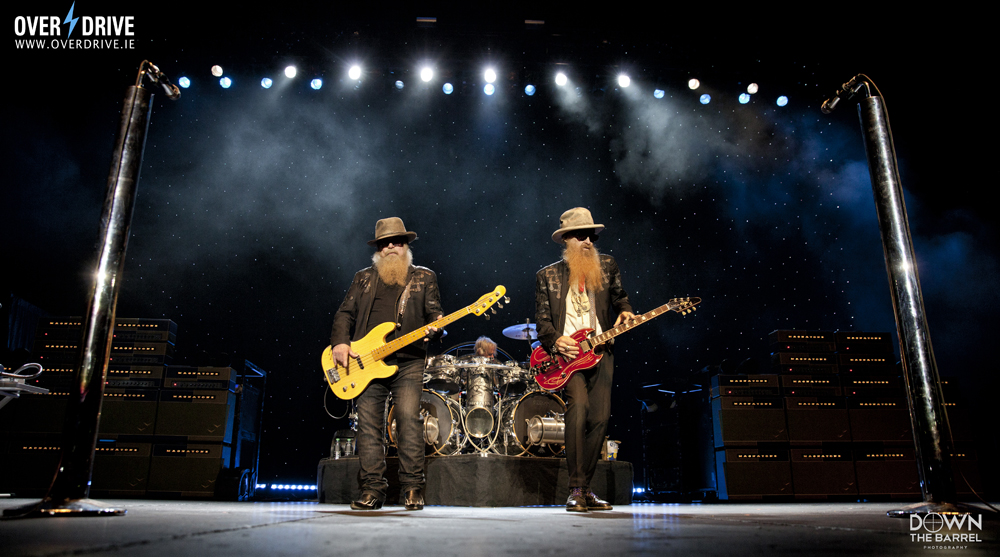 On Friday night in Ireland’s 3Arena that’s exactly what they did do and you know what?  They totally got away with it, because they’re ZZ Top and who’s going to tell them they can’t?

Looking slightly dwarfed by the size of the arena stage, Billy Gibbons, Dusty Hill and Frank Beard strolled on stage exactly like three guys who’ve been doing this for half a century.  Nonchalant and cooler than an Elvis snowman. With no screens and no stage decoration, not even a custom backdrop it was as stripped back a show as I’ve ever seen.  The packed arena roared as they launched the show with Got Me Under Pressure, sparking an instant singalong.  The crowd was up for it straight away and danced their way through the whole show.  It was followed by Waitin’ for the Bus/Jesus Just Left Chicago from the Tres Hombres album, which is frighteningly forty-four years old.  Much like the band themselves, the songs don’t seem to age. ‘Gimme all Your Lovin‘ followed.  It’s a strange thing when you’ve listened to a band for so long to finally hear these classic songs performed live, but totally satisfying when they live up to and exceed expectations. 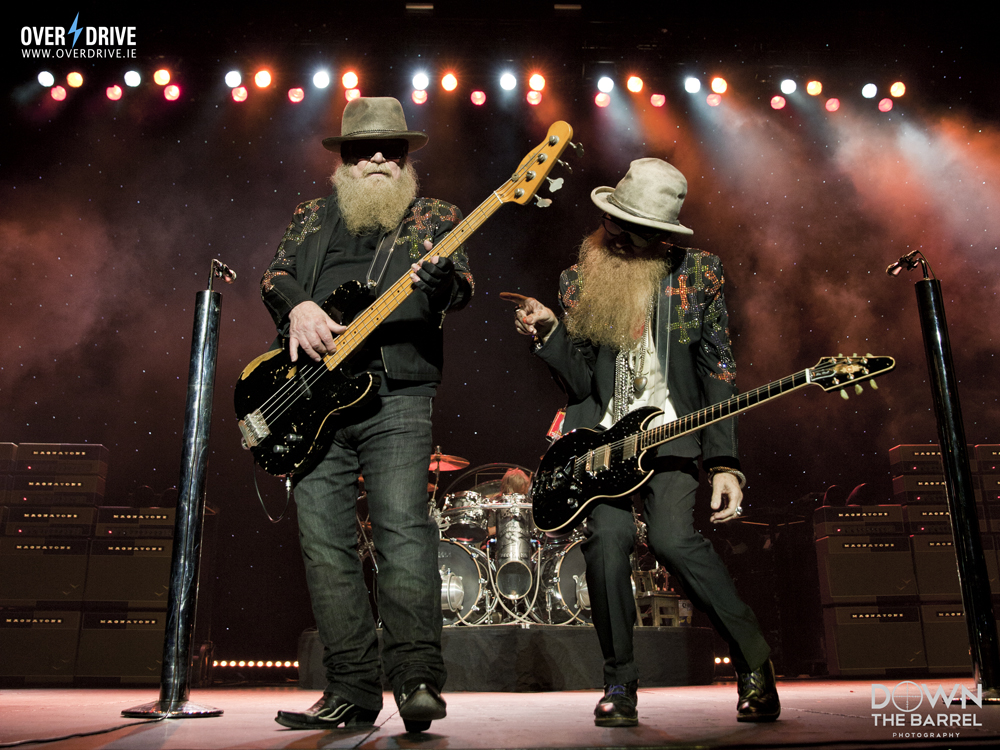 Billy Gibbons enjoys a chat and stopped a few times for a word with the crowd.  He told us how the band had enjoyed a bit of sightseeing around Dublin, stopping off at Burdock’s chipper, (“we got the smokey ones”) and how people around here are nice.  “After fifteen Guinness they’re REAL nice,” he says, with a glint in his eye and a grin on his face.

Pincushion and I’m Bad, I’m Nationwide were followed by my own personal favourite, ‘I Gotsta Get Paid’.  It’s gratifying when a well-loved track lives up to your feelings for it when you hear it live, and this was no disappointment.  The first cover of the show came next.  It started with Billy telling us, “back when we were young, this guy picked us up and took us round the world and taught us ’bout half what we know.  His name was Jimi.” 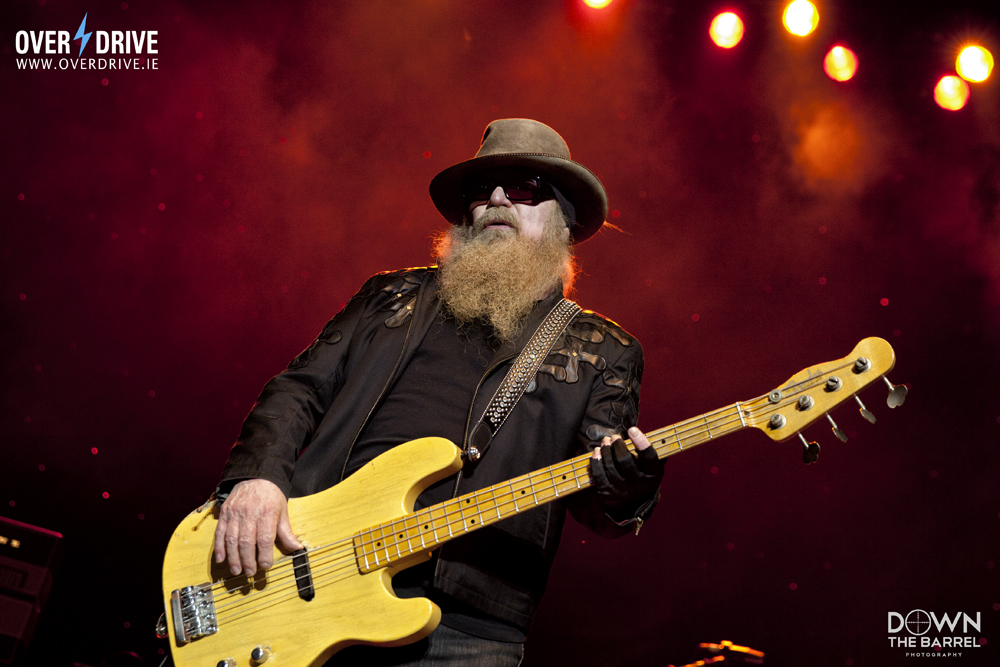 Their version of ‘Foxy Lady‘ was a nice tribute to Hendrix and sparked a fair bit of Wayne’s World style dancing in the crowd. My Head’s in Mississippi became My Head’s in Dublin, Ireland, with Billy counting off the syllables on his fingers while the fans roared approval. Dusty Hill got to take centre stage next with Catfish Blues. His vocal abilities are every bit as good, if not better than Billy’s and give an extra dimension to the band that they’d be all the poorer without. The relationship between the two is almost symbiotic, having been on stage together for so long.

The synchronised dance moves they do are nothing new but are so well rehearsed, so practised that they almost seem off the cuff. The crowd absolutely loves it though. By this point, it was becoming a gig where they wanted to show off everything they can do, from their own brand of Texas rock n roll to blues and into a bit of country.  Guitar tech Elwood Francis joined the band on stage to play lap steel on Act Naturally, which Billy christened the ‘redneck rock portion of the show.’ Elwood came on to little fanfare and left immediately he was done performing, dashing off stage with a quick salute to get back to the day job. If he ever fancies quitting he’d do well on stage himself, he was very good. 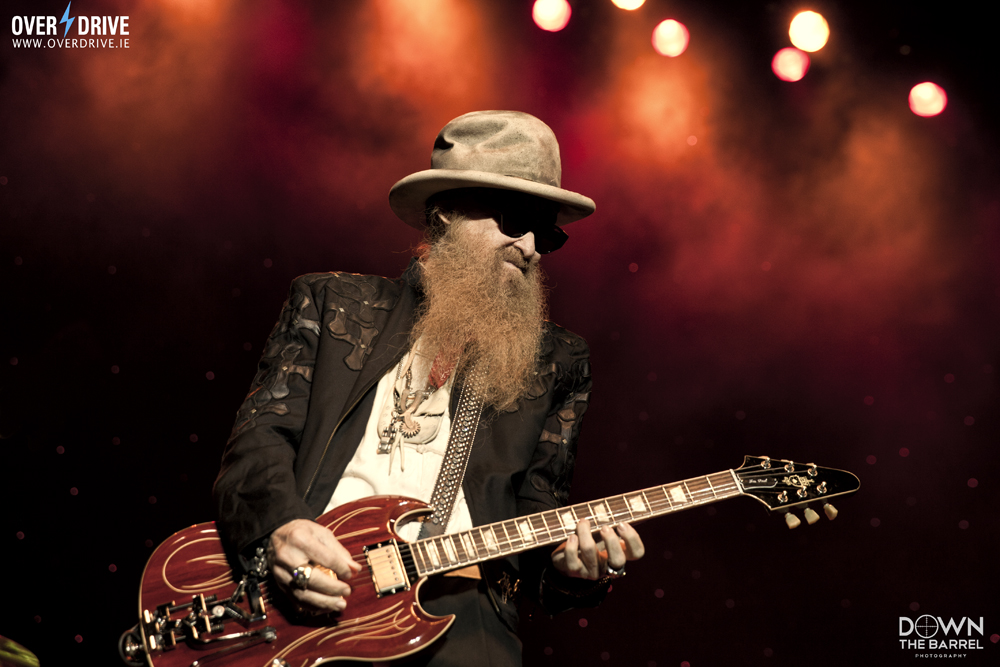 The run in to the end of the show took us back to classic ZZ Top, with the highlights being Cheap Sunglasses, Sharp Dressed Man and Legs, which saw Billy and Dusty swap their boring, normal instruments for a pair of very swanky white furry ones. How they could find their strings among the fluff is a mystery but not a note was dropped as they brought the main show to a close.

After a minute or two, the band made their way back on stage for an encore made up of two of their best-known songs, La Grange and Tush. Knowing the end was near sparked a second wind for the crowd, who went into overdrive, bouncing along and singing every word. My faith in the future was somewhat restored by the kid next to me, no more than thirteen years old, yelling at his parents and brother, “that’s the best band in the world!!”  If three guys with a combined age of 203 can inspire that kind of excitement in a kid barely into his teens then there’s hope for us all yet. 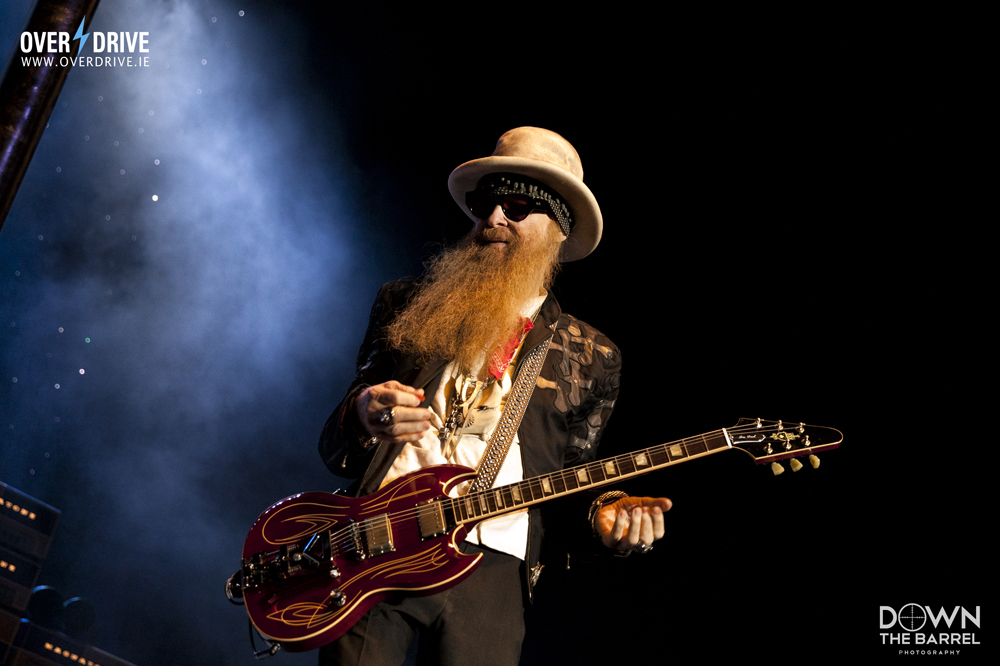 After another few seconds break we were treated to a second encore and the final cover of the evening.  As the whole crowd, including the kid next to me, roared every word of Jailhouse Rock I sat back with a satisfied smile. In a gig that showcased the best of their own, paid homage to their roots, and their heroes, and paid it forward in the form of guitar tech Elwood, ZZ Top showed their absolute class. A masterclass in fact. 4/5

Photography- Down The Barrel Photography © 2017 exclusively for Overdrive.ie.