You know that there is gonna be one hell of a party when the Airbourne boys roll into town. Well not only were they ready to bring the thunder from down under, but they brought along The Black Spiders to open proceedings on a pretty normal Tuesday night. In the immortal words of Clutch’s Neil Fallon – “Ready to rock if you wanna Roll”! You betcha!!! 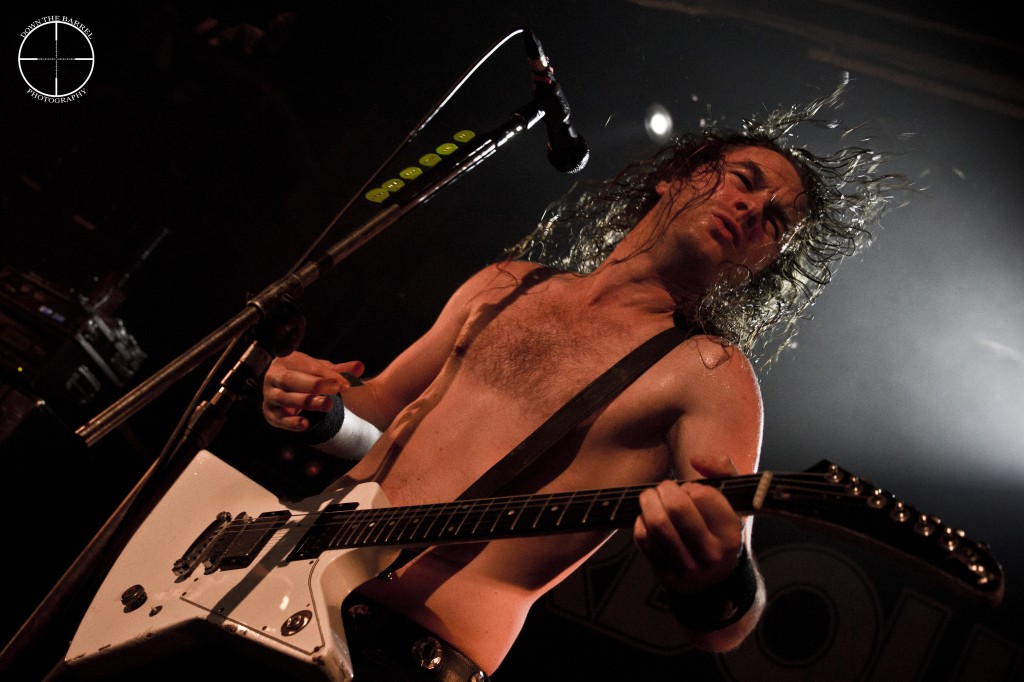 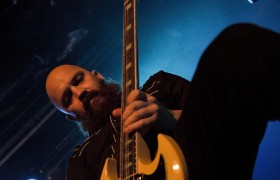 With a selection of cuts from the bands back catalogue, including the monumental sing along that is “Kiss Tried to Kill Me” and “Stay Down” taking from the very fine “Son’s from The North” the band ended with a slice of the most recent album ” This Savage Land”. Closing their set with “Teenage Knife Gang” and singer Peter Spiby’s request for the now packed out venue to chant “Fuck You Black Spiders” saw the guys march off the stage with a definite positive conversion rate of new fans.

There is a very close relationship between Ireland and Airbourne as they have just smashed it every time the guys have played a show on our green shores. Without a fanfare or a elaborate build up, the Airbourne boys come blasting out of nowhere to a frenzy of pounding drums and whaling guitar riffs and proceeded to take our heads off with “Ready to Rock” followed by “Girls in Black” which saw frontman Joel get on the shoulders of the security and rip out a flawless guitar solo in the middle of the crowd! 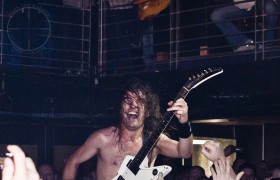 Bearing in mind, that this is the second song in and already they band are looking and sounding like they are warmed up and in the process of owning a crowd that most bands can only capture towards the end of their set. Next up is “Chewing The Fat”, “Back In The Day” and “Diamond In The Rough”. The heat in the venue is now at an all time high and you would be hard pushed to believe that this was a cold Tuesday night in October. Joel is just giving it everything that he has and the band are fueled with an intoxicating contagious amount of adrenaline that everyone in this venue is feeding off of. 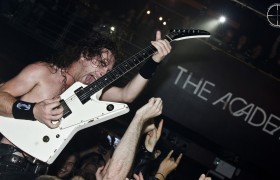 Time for some new tunes of the very awesome “Black Dog Barking” which the band released back in May of this year via Roadrunner. Title track from the album goes down a storm with “Cheap Wine, Cheaper Women” following.

Beer is flowing throughout the venue thanks to the generosity of Joel who bangs his on stage rider of beer on the side of his head before tossing a few cans of exploding beer out the now rabid audience.  This is one hell of a party and it just keeps getting better. 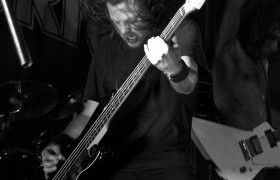 Looking at the fast approaching curfew time see’s the guys rip out “Stand Up For Rock n’ Roll”. With  brief moment to gather thoughts and some chanting from the crowd the band return to the stage for a blistering encore of “Live It Up” which had the backing track of the fighter plane from the album, giving a huge sound before exploding into the anthem chorus that had literally everybody in the venue giving the horns of respect including the bar staff who seemed to be enjoying the show, which is always great to see. 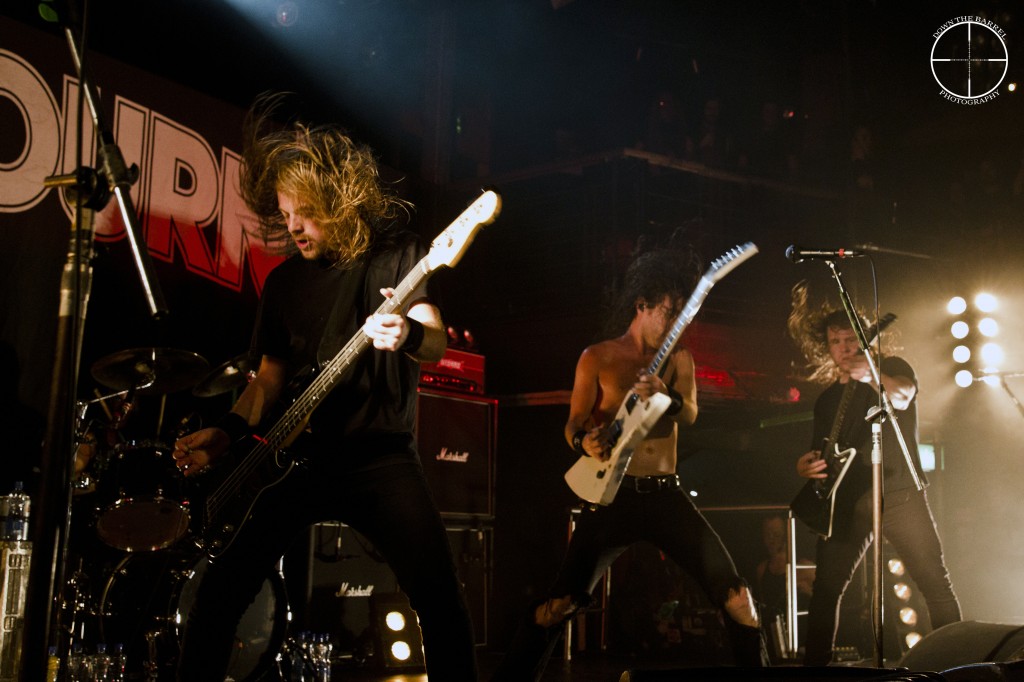 A final burst of awesome comes in the form of “Raise The Flag” which saw Joel climb to the balcony and lash out a solo before sprinting around the venue through the security and somehow back on stage in a matter of minutes. 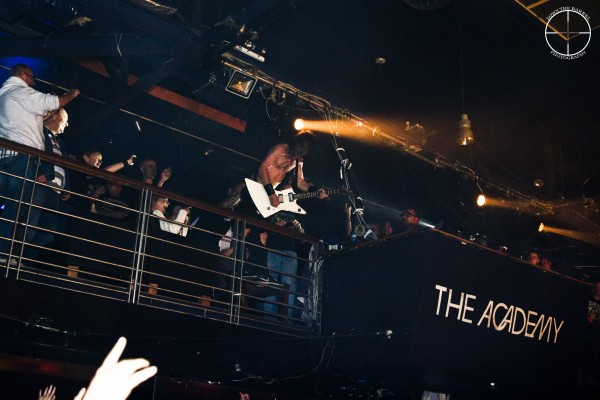 This is by far one of the best bands on the live circuit at the moment who literally put in more than most entire tour packages alone. Final song of the evening “Running Wild” starts with rhythm guitarist Dave Roads, drummer Ryan O’Keeffe and bassist Justin Street displaying the excellence that holds Airbourne together behind the mesmerizing commands of front man Joel. 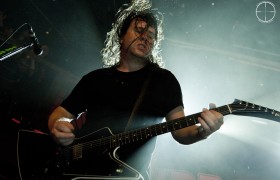 Suddenly it’s all over!

This was only the second date in on the bands tour in support of “Black Dog Barking” and judging from the performance that Overdrive witnessed tonight, it will be a miracle, if by the next time the guys are playing in Dublin they are not in a venue that can hold thousands. A fantastic show with great sound and just balls to the wall, headbanging pure Hard Rock! Awesome! 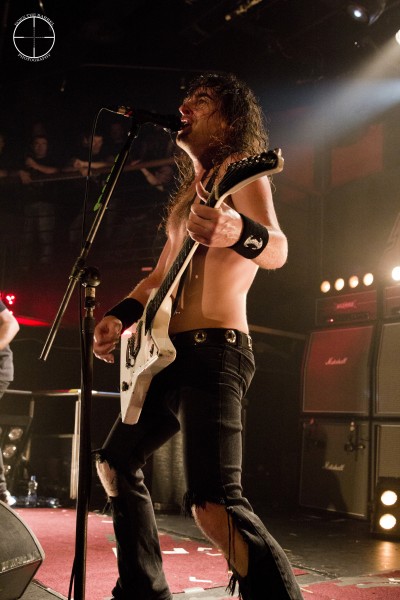 Pictures – Steve Dempsey of Down The Barrel Photography