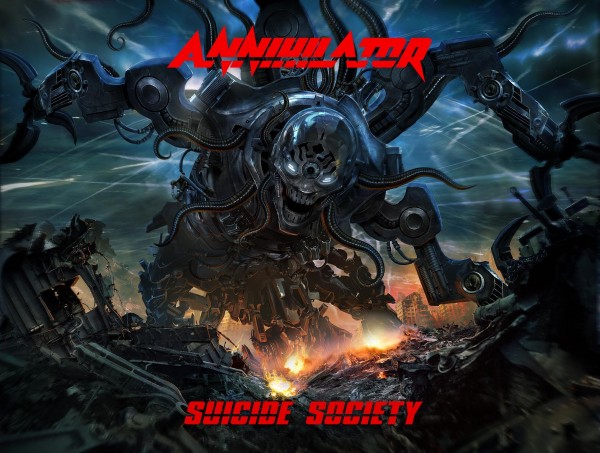 With the much anticipated return of Annihilator to Ireland on October 1st in Dublin’s Button Factory, the arrival of a new album will no doubt make for a blistering set list casting right back through the bands awesome back catalogue.

As usual, guitar wizard Jeff Waters handles all songwriting duties, plays all guitar & bass, engineers, produces, mixes and masters “Suicide Society”… and Waters is also back commanding lead vocal duties, as he did on the critically acclaimed “King of the Kill” (1994), “Refresh the Demon” (1996), “Remains” (1997) and other Annihilator albums over the years.

Waters on his return to vocal duties: “Dave (Padden/vocalist from 03-14) & I have, essentially, been Annihilator since 2003 but he resigned last December, citing having had enough of touring, being away from home and other commitments. I thank him for his 11 years with Annihilator. That said, Annihilator and I are known for never giving up and, occasionally, coming up with something even better than its former offering(s): this is undeniably the case with “Suicide Society!”

With “Suicide Society”, Annihilator goes headfirst into some of the most technically perfect, crisp, and crushingly taut, riffage Waters has ever produced. Although Waters’ vocals keep traces of stylings from his “King of the Kill” album, they now evoke a surprising blend of legends such as Staley, Osbourne, Hetfield and Mustaine. This, in a twisted way, mirrors Waters’ signature blend of riffing, drums grooves and bass; all drawing from multiple sources and genres.

Waters has built a worldwide reputation as being a premier guitarist and songwriter; the conciseness and arrangement of “Creepin’ Again” is both an air-guitarist’s dream and a sharp reminder of this. The gloriously-brutal thrash of “My Revenge” calls up a vintage of ’85 with the technical chops of 2015. The neo-classic title track defiantly expresses anger at the state of world affairs, while offering up hope in closing. With the multi-layered power of the anthem “Snap”, Waters illustrates the diversity of Annihilator’s sound, without sacrificing one decibel of attack.

“Metal fans will likely sport evil, satisfied grins on their faces, when they hear this record” chuckles Waters, “but in the words of Joe Perry: “Let the Music Do the Talking”!

The full-track listing is:

The One You Serve

Metal fans all across the world are aware of Annihilator’s stellar, energetic and “real” live shows. Drum monster Mike Harshaw continues on for his 4th year with the band, one familiar name returns & another is born: bassist Cam Dixon (from “King of the Kill” era) returns to the fold & guitarist Aaron Homma makes his debut with the band. 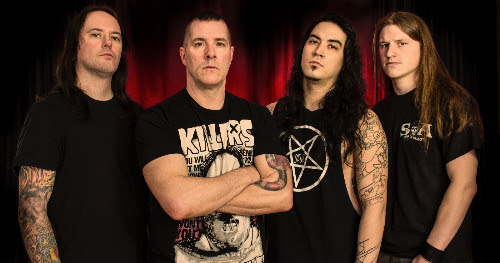 Aside from the band’s upcoming, scheduled devastation at some of Europe’s mega-summer festivals (ex. Wacken Open Air), Annihilator will be headlining Europe this fall on their “EUROPE IN THE BLOOD” tour 2015 with an exclusive show in Dublin’s Button Factory on October 1st through DME Promotions. For more information just hit the graphic link below. Tickets on sale now!