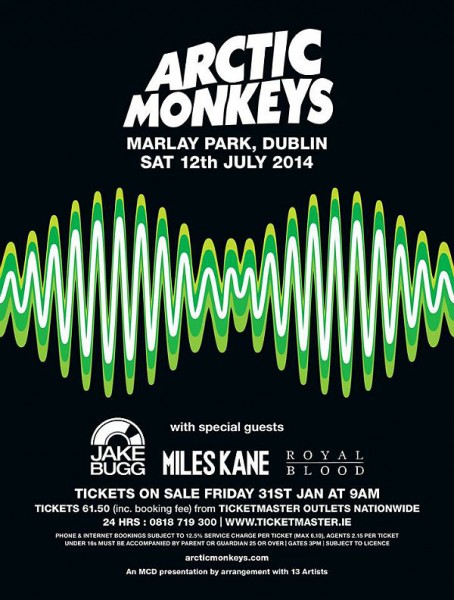 Tickets €61.50 including booking fee are on sale this Friday 31 January at 9am from Ticketmaster outlets nationwide and online at www.ticketmaster.ie.

Arctic Monkeys’ fifth studio album AM was released last September where it went to straight to Number 1 in Ireland, the UK and many more countries. AM was one of the fastest selling albums of 2013 and was nominated for the Mercury Prize.

Arctic Monkeys are nominated for ‘Best British Group’ & ‘Best Album of the Year’ at Brit Awards 2014 and they hold eight nominations in the upcoming NME Awards.

Arctic Monkeys embark on a major US tour this month with all of the dates already sold out. 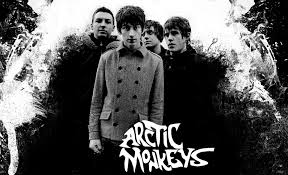 In 2013, Jake Bugg played over 200 shows worldwide, some highlights being opening the Pyramid Stage at Glastonbury in front of over 100,000 people, and performing at the 20th Nobel Peace Prize concert in Norway.

Jake Bugg has now sold over a million records across his two albums in the year he was also nominated for 2 Brits, a Mercury Music Prize, An Ivor Norvello award, and winning ‘Best New Act’ Q awards. His second album Shangri La has been a massive hit record.

Jake Bugg has been nominated for ‘Best British Male’ at this year’s Brit awards.

Miles Kane’s debut solo album, ‘Colour Of The Trap’ was released in 2011. The Last Shadow Puppets member’s second solo album ‘Don’t Forget Who You Are’ was released last June.

Brightonian two-piece Royal Blood formed in early 2013. They are named as ‘Sound Of 2014’ by the BBC.

Tickets limited to 8 per person.