The notorious guitar wanker has been testing his new signature model during rehearsals with Giraffe Tongue Orchestra and will record Mastodon’s new album on it. The Epiphone Ltd. Ed.  Brent Hinds Flying-V Custom won the Guitar World Gold Award and will be reviewed in Guitar Worlds September 2016 issue by Chris Gill. Read more below about the coming into existence of this guitar… 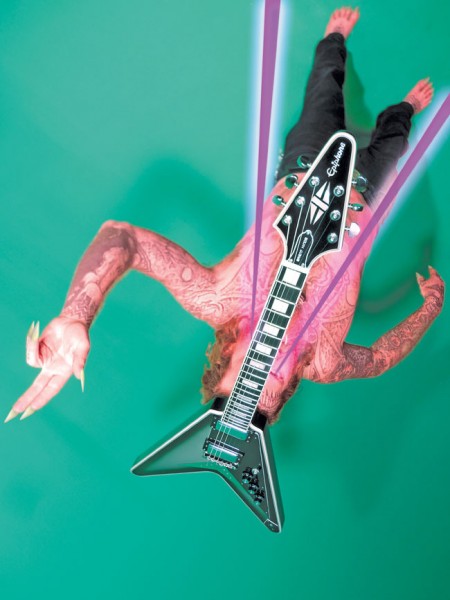 A year ago, Hinds unveiled in an Instagram picture the prototype of his signature series – which had the wrong paint job done. Instead of the favourable silver burst, Epiphone painted it black on black, a “great mistake” according to Hinds, who fell in love with it’s looks. Although in the description box, he doesn’t hold back on ranting about his negative experience with Gibson when he tried to get his signature series through with this major guitar company, since he actually plays a Gibson Flying V. In an Interview with Guitar World he states: “I’m pretty disgruntled with the Gibson people […] But Epiphone, if I could give them all a hug or a Valentine’s card I would!”

In April 2016, the Epiphone Ltd. Ed. Brent Hinds Flying-V Custom was released.
Watch Brent Hinds frolicking and chopping wood with his new Axe in the video below:

In the review of this gnarly guitar, which will be published in the September 2016 issue of Guitar World, Chris Gill states that “The Epiphone Brent Hinds Flying V Custom offers everything there is to love about a Flying V and more. The medium jumbo frets and 1958 neck profile provide the ultimate in playing comfort.” Or to put it in Hinds‘ words:
“I emphasized to them that I’m gonna wank, spank, slobber, bleed, bend, crunch and crush all over this fucking thing and the guitar’s gonna need to be able to handle the monster behind it […] But I’ve been playing the piss out of it and the guitar didn’t break a sweat on the tuning issues, going from drop A to drop B to standard 440.” (Interview with Guitar World)

Furthermore, Gill emphasizes the savageness of this beast. “The Hammer Claws pickups are the reason this guitar is a must buy, delivering soulful midrange and solid bass thump that sounds equally awesome clean or distorted to oblivion. With its Silverburst finish, combination of Flying V and Les Paul Custom features, and awesome-sounding Lace USA Brent Hinds Signature Hammer Claws humbuckers, this guitar is quite possibly one of the coolest Flying Vs ever conceived.” Be sure to pick up a copy of the September 2016 issue of Guitar World to read the full review.

The face-tattooed skull in portrayal of Hinds is an epic detail.
We’re looking forward to hearing which bestial and hill-billy sounds will be produced on this savage axe.