It’s the parabolic motion of projectiles. Or, as Isaac Newton stated, what goes up must come down — that is, everything except Clutch. Having gained a considerable amount of international success since the release of their tenth studio album, ‘Earth Rocker’ back in 2013, Clutch followed with the mighty ‘Psychic Warfare’ and proceeded to solidify their place as one of the most engaging bands in the hard rock/stoner genre. Now Overdrive can confirm that the Maryland quartet will be once again returning to Ireland for an exclusive show in Dublin’s Academy this June.

Clutch will be performing at Dublin’s Academy on Thursday 15th June 2017 with tickets priced at €26.00 (inc booking fee) available via Ticketmaster and Sound Cellar from Wednesday, February 1st. Over 18s |ID required.

Earth Rocker created an insurmountable peak. But Psychic Warfare has altered laws of physics by elevating the smart songwriting and impressive performances of that last album, setting an even higher benchmark as their now-definitive album to date.

The eleventh Clutch studio album Psychic Warfare goes straight for the throat with “X- Ray Visions” and never let’s go. Working again with acclaimed producer Machine, this time in Texas, the concise arrangements that made Earth Rocker so assertive is the same harness for the combustible musical energy on Psychic Warfare. Harder, faster… let the rhythm hit ’em.

Formed in 1991, the Maryland-based band’s ability to absorb different musical styles and fabricate them into a distinct Clutch sound continues to be their forté. “A Quick Death In Texas,” overstocked with signature “Clutch heavy” Tim Sult riffs and lonesome guitar licks, and the funk undercurrent of “Your Love Is Incarceration,” colour Psychic Warfare with articulate musicality and comfortable familiarity. 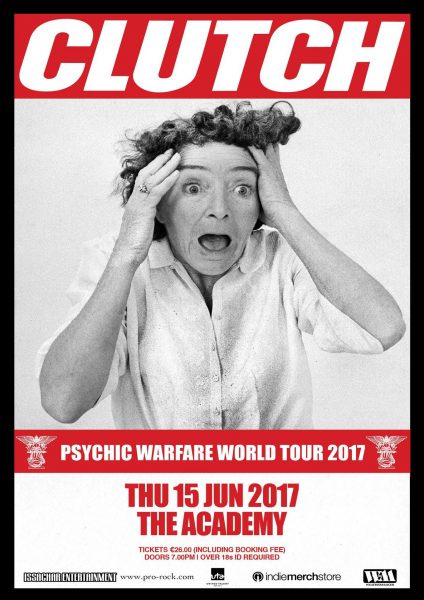 The overall intensity of Psychic Warfare would be self-consuming without the pressure valve of a canny rhythm section. Drummer Jean-Paul Gaster and bassist Dan Maines have an intuitive sense of dynamics that gives weight and contrast to the forcefulness of the vocals, steering Clutch into the straightaway out of tight, exhilarating corners.

For your chance to win tickets to see Clutch play Dublin’s Academy on Thursday, June, 15th simply do the following:

Winner will be chosen at random and contacted privately on Friday, February 4th. *All entries must be 18+ | ID required.

*Click graphic below for official Overdrive facebook page. Don’t forget to like/follow us for all the latest news, reviews, comps and interviews! 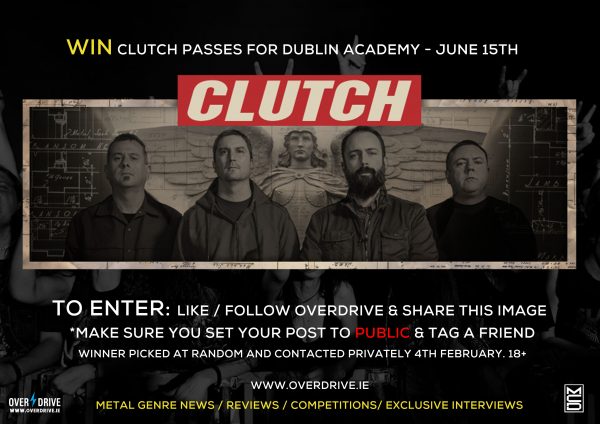