El Ten Eleven, the post-rock LA based duo, roll into Dublin for a one off exclusive show in Whelan’s. Demented Promotions hosted one hell of an evening, with a show that was close to a religious experience if anything. 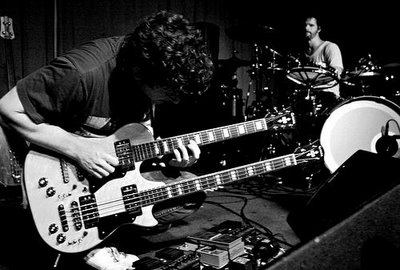 To close one’s eyes and listen to Transitions, El Ten Eleven’s fifth studio album is to get lost in a world of loud and very real talent but to see this album played live changes ones perception of reality. Kristian comes on stage with just two guitars, a fretless bass and a double neck bass/guitar. Tim has his drum kit with very few add on’s. A few small amps placed neatly in the corners – the stage looks empty. They do not need extra musicians or instruments on stage to help them create their sound, they do it all by themselves.

From the start of the set the crowd comes forward leaving the bar and merchant stand bare and alone. A trance sets in that is focused around the duo as they start loud and ready to engage with the crowd. No one really knows what is in store but as Kristian loops the first four bar bass line and begins to play a melodic guitar riff over this there is a stir of amazement that does not dull for a minute during the whole performance. 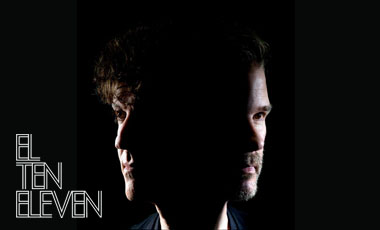 Tim and Kristian are true performers that feed off the energy of the crowd. Dunn jumps around to the beats of Fogarty, while also seamlessly moving between all the gear that he relies on to create this amazing show, located at the front and back of the stage. With a myriad of pedals to choose from the two appear stress free and relaxed where other people would get frustrated and chaotic.

But with no one to rely on the band is not perfect. Throughout the set while changing between bass guitar and double neck Dunn’s strap fails, but he does not falter in the slightest. Quickly grabbing the strap and correcting himself he leaves enough time to smirk and look at the audience before continuing the set effortless. Earlier with a cheeky smile Kristian addresses the audience personally to enjoy the drumming of Fogarty as he had ‘fucked that up’, referring to the guitar riff Dunn attempted to play. Highlighting these mistakes does not show the lack of talent these guys have but shows the utter maturity and proficiency they bring to the table.

The highlight of the show for me, that showed the extreme skill and ability of these two amazing musicians, was Dunn playing both necks of the double neck guitar at the same time. Fogarty stops rocking out and leaves the sanctuary of his drums, sticks in hand, kneels in front of Dunn and proceeds to drum the rhythm on the bass strings creating the slapping rhythm of ‘Yellow Bridges’. If this does not sell the absolute skill and abilities that these two men have, nothing will. To see the magic live on stage is to simply blow your mind!

Before the close of the song Kristian explains that both Fogarty and himself do not believe in the custom of encores, thanks the crowd for their time and support and proceeds to play the final two songs. Choosing to end with their title track ‘Transitions’ completed the night leaving the crowd with a sense of fulfillment.

If you see one band play live before you die, let it be El Ten Eleven.