Stoner Rock legends FU MANCHU have confirmed their one and only show in Ireland as part of their 30th anniversary run of dates through Europe and the UK. Get full details below and be in with a chance to win passes to the show below;

2020 marks the 30th anniversary of the existence of Fu Manchu. Originally formed in 1985 as a Black Flag-influenced hardcore punk band called Virulence, Fu Manchu has since become one of hard rock’s most celebrated names.

Catch Fu Manchu’s only Irish show at The Button Factory on September 30th with support from Electric Citizen. Tickets on sale from Friday 21st February priced at €23 (inc booking fee) via Ticketmaster outlets Nationwide and online.

The band released its first single “Kept Between Trees” in 1990 and, in the years following, helped give rise to an iconic style of heavy music born out of the desert and tagged “stoner rock” alongside peers such as Kyuss, Monster Magnet and Sleep. 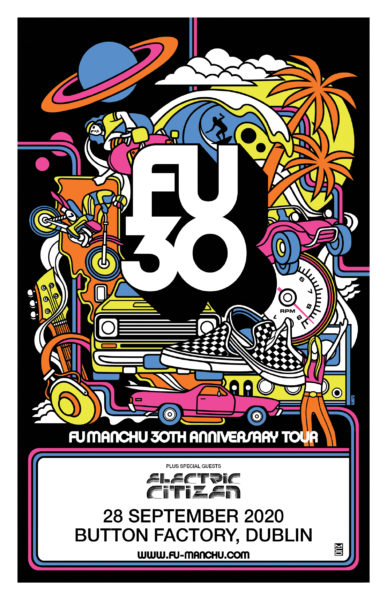 Since the band’s inception, the quartet has built itself a fanatical army of loyal enthusiasts all drawn to the group’s guitar-driven sound and carefree lyrics centred on “old muscle cars, choppers, vans, skateboarding and science fiction.”

Over their career, the band has released 12 albums and has performed to sold-out audiences all over the world.

In celebration of the band’s 30th anniversary (FU 30), the band will be doing a comprehensive reissue series of their entire catalogue on vinyl throughout the year.

These remastered versions will include previously unheard live tracks, b-sides and demos. To coincide with the album releases, Fu will be reissuing the merch designs that were sold on the associated tours from those albums. 2020 will also see the release of the band’s 13th studio album.

This follow-up to 2018’s ​Clone Of The Universe​, which featured a guest appearance by Alex Lifeson of Rush, is sure to be a triumphant moment for The Kings of The Road.

For your chance to win passes to the show simply do the following:

Winner will be chosen at random and contacted privately on Friday 21st February at 9 am. 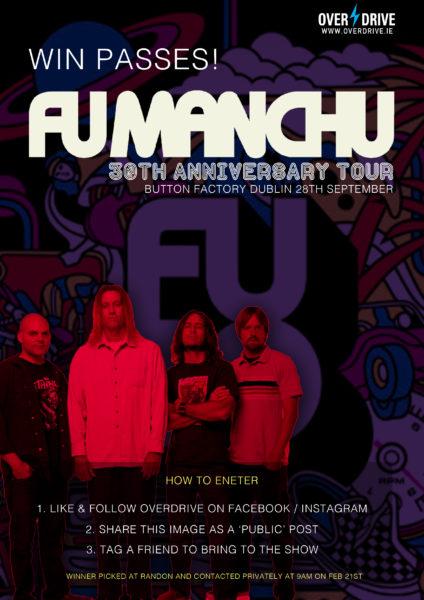