Having formed in 1978, The Beat are more than just another Ska band. These guys help shape the sound of the 1980’s Ska/Punk crossover that spawned a thousand bands and remain one of the most iconic bands to emerge from the UK. Overdrive had the pleasure of speaking with the one and only Ranking Roger, about the forthcoming show in Dublin’s Academy on February 6th, as well as the state of today’s music and our lack of freedom of speech! 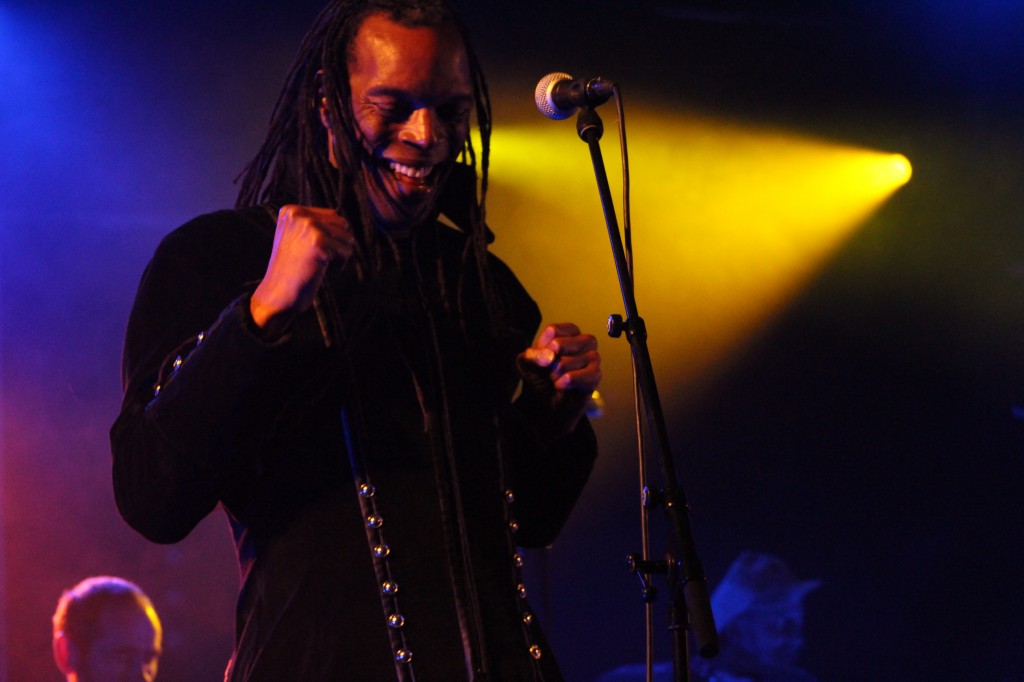 With a special one off show in Dublin’s Academy on February 6th, Ranking Roger is geared up and ready to drop some new material for the fans. The Dublin show will also feature a very special guest and according to Rodger is “going to be amazing“.

OD –  The Beat will be approaching it’s 37th anniversary this year. Looking back, did you ever think that you would still be touring and producing new music at this point in your career?

Ranking Roger– Good God, are you giving my age away? ha ha. No, really it’s a total honor and privilege to still be here after 37 years and to be successful in doing it also. We are not getting top ten hits or anything like that, but we are playing to packed venues, which is just amazing. People totally respect the music and get it! I think that the lyrics of the band are based totally on reality and not just “I love you, I love you” like all the other stuff that is cluttering up the radio these days.

We dealt with real subject matter, we were socially conscious and I think that kind of carried on, if you know what I mean. People respect what we stood for and understand the hard battle that we had to endure, because back in those days, if you took a political stance on something you were rejected and blanked straight away. We managed to get hits as well as voicing our political opinions, as were The Specials. The higher powers didn’t want   that to happen and they most certainly don’t want it again! If you look back over the years in music, there really hasn’t been that sort of lyrical challenge like there was back then. The music really revolutionised the people and raised awareness on topics that were on peoples minds. It was a very special time for us and the music of that time.

OD – I’m sure there were many offers for you guys to return to the live scene over the years, but you decided that 2003 was the year to do it. What was the deciding factor in this decision back then?

Ranking Roger – That was the Royal Festival Show, yea that was a lot to do with Mojo Magazine, as they had a lot to do with with the planning of that event. We tried to make that whole experience succeed and I think we did. We had all the members there apart from two and it was sold out, so we knew that there was reason to continue and carry on as The Beat. The audience was incredible and had traveled from all over the UK and beyond to see us because they thought they would never see that show ever again.

So twelve years later, we are still going and it just feels really healthy, if you know what I mean.  That whole scene with bands like The Clash and The Specials, was just amazing. We don’t have music like that anymore and it’s such a shame because people are angry and music is a great non-violent way of getting your frustration out. Something needs to change.

OD – Ranking Jr is now a full time part of the band, how has this effected the writing process and the general performances of the band? 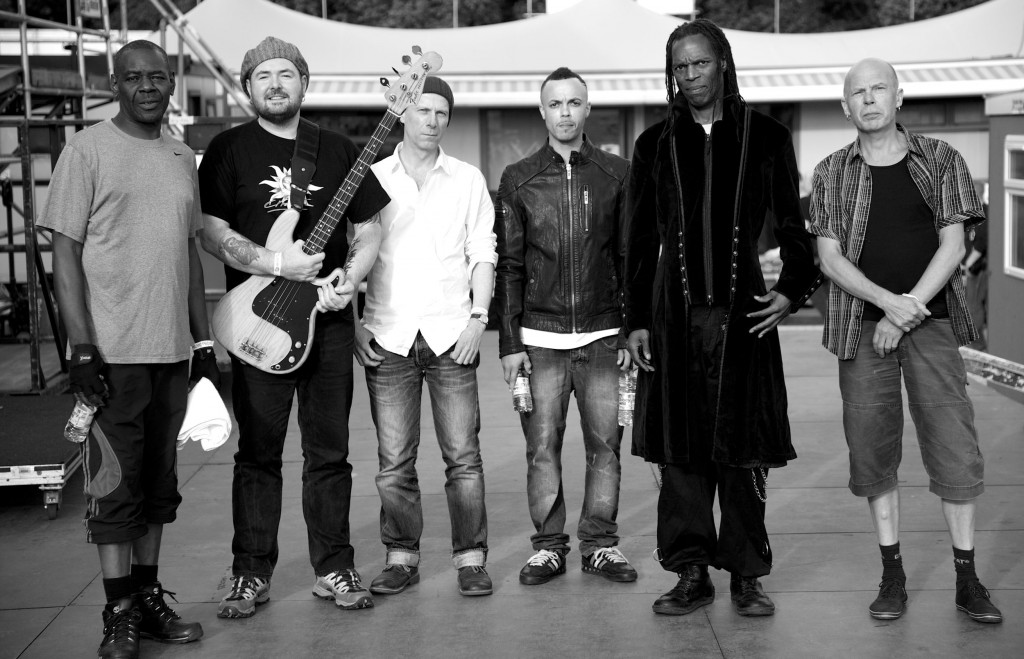 Ranking Roger – It really hasn’t changed anything. I mean, he (Ranking Jr.) has heard my music since he was born and has also been on the road with me since he was 15 years old. He has been doing this for so long now, that he can run his own thing. He loves being in this band and it’s a great thing, because all the young-blood, the new audience are looking to him and the older heads are looking at me. Within it all, we both command the stage and we know our place. 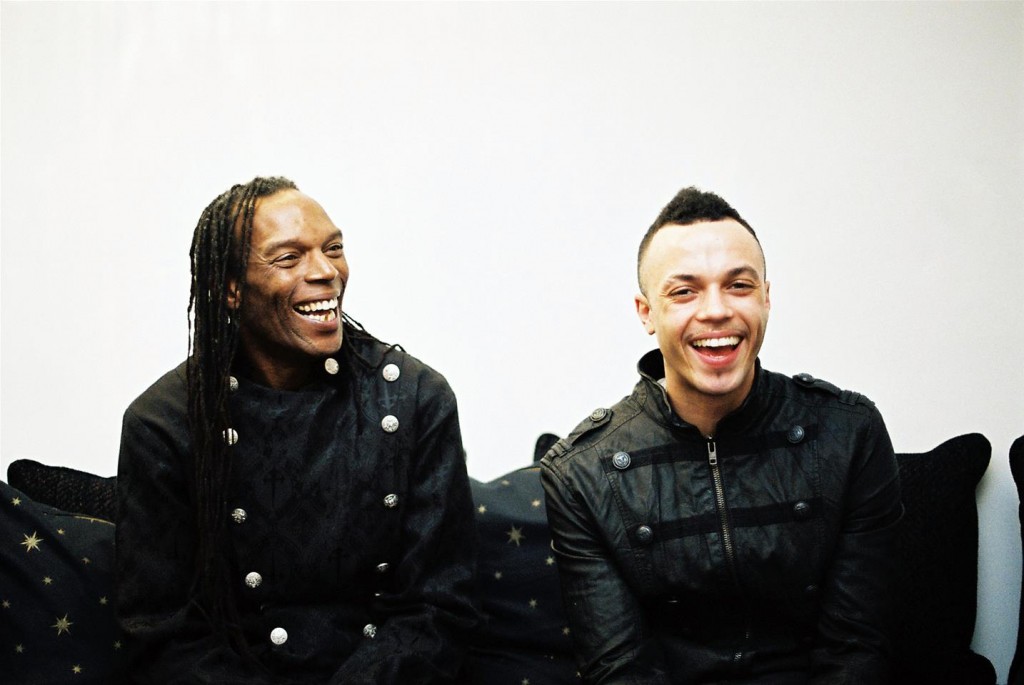 There is no hierarchical element to it, we just know to back each other up on stage. If there is a situation where I have a weak voice during the show, he will back me up and likewise if his voice is going, I will back him up. We sing in unison and back each other up. It’s a really good vibe and relationship and one that I don’t see in many Father and Son’s, I’m very lucky.

OD – You are about to embark on a Australian tour, are there any particular places that you will be playing that brings back any memories for you and are there any dates on the table for America yet?

Ranking Roger – We haven’t got a US tour set up as yet. I know that will happen when the time is right, but my feelings on it are, “I’m in no hurry” and would love to do it when the time is right. We have had thousands of American fans reach out to us and ask us “when are you coming over, we want to hear your version of The Beat“.

We are very excited to be going to Australia, as we are booked to play the Byron Bay Bluesfest, which is going to be amazing. It’s probably one of the biggest festivals in the world outside of Glastonbury and we can’t wait to get there. We have dates also in Europe in Germany, Holland and Belgium, with a few more foreign shows this year, which is good. The band needs shows like this because we have been playing the UK for quite a bit now and even though people are still coming and they love it and know they are going to get a great show, we need to keep it exciting for ourselves also. 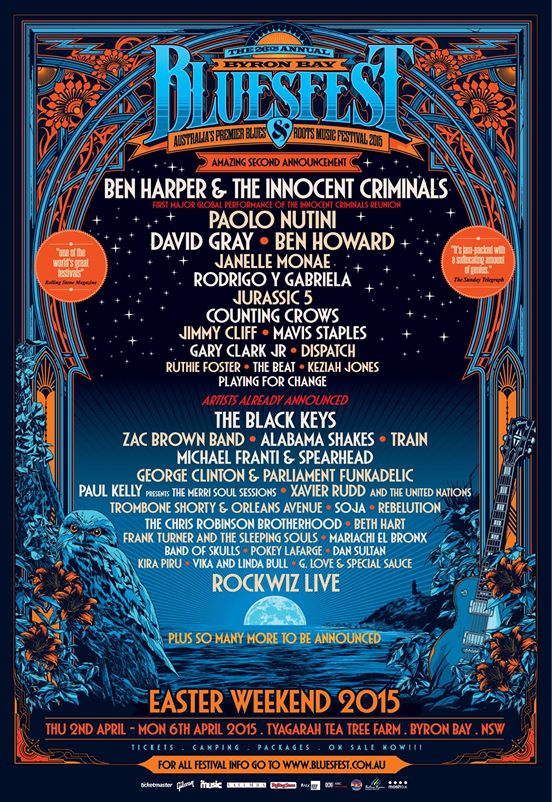 Playing for new audiences is hard work because they have never seen us before and they don’t know what to expect. When we go back there again and see them jumping up and down and totally getting what we are doing, it’s a great feeling.

OD – The main lyrical inspiration for the music was a direct reaction to your environment, growing up in Birmingham, with lack of employment and the hardships and the struggle for people to survive. In the 37 years that have passed by, things have sadly not changed very much. How does this make you feel?

Ranking Roger – It was difficult back then and I think that it’s harder now than it ever was! I can imagine that if we came out with “stand down Cameron“, he would find some clause to shut it down and make seem like we are terrorists. The whole thing about free speech and what we could say years ago which was fantastic and just seems to not exists anymore. Can you image The Cure‘s song “Killing An Arab” if they had released that now, it would have to be taken off the record. Where has our free speech gone? This is just a pure example, ever since 9/11 our lives have changed and we are now treated like cattle. People need to come forward and realise their rights and take back what is theirs.

Music is just so important and has always been a great vehicle and is a fantastic way to deliver a message to the world. Look what happened with Band Aid and Free Nelson Mandela. The right message can help to change the world and if we put it in a way where we are telling them what is going on instead of ramming it down their throats then it resonates with the people more. It makes people think and that’s a very important thing in this day and age.

OD – What’s next for The Beat in 2015 and regarding the Dublin show on February 6th, what can we expect from the set-list on the night?

Ranking Roger – Well, firstly I want to apologise to the Irish people for arriving early!(ha ha) Because usually, it’s always St. Patrick’s Day when we get there. It’s been six years in a row that we have been there on St. Patrick’s Day and it’s almost become a tradition within the band ha ha.

For the Irish date we will have about five or six band new songs for the punters to mumble about (ha ha). There are great songs and we are going to throw them all in there and see what happens! Also, there is going to be a guest appearance from my daughter who lives in Cork. I’m hoping that she will be arriving for the show and will take part in some of the songs and do some backing vocals for us. I can’t wait for this gig, as the possibility of my daughter joining my son and I on stage, is so special and will no doubt be fantastic.

The Beat play Dublin’s Academy on April 6th. Tickets are now on sale and available from Ticketmaster.

Winner will be chosen on Friday April 3rd. Good Luck! 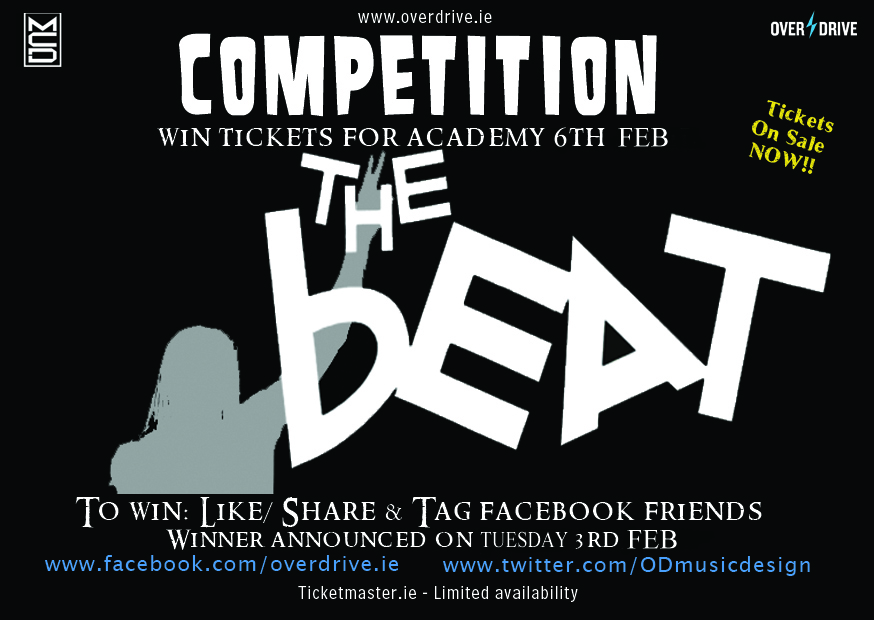