Foo Fighters have announced Frank Carter & The Rattlesnakes and Hot Milk as special guests for their Belfast and Dublin dates at Boucher Road on 19th August and RDS Arena on 21st August.

With the continuous rise of Foo Fighters, the band will be taking in some epic live shows this Summer and today (Wednesday, 6th March) the band have announced their official support for all scheduled shows.

Frank Carter & The Rattlesnakes will be joining the bill, bringing their intense live show to the Foo’s stage. With a new album ‘End of Suffering‘ about to drop on May 3rd and the first single ‘Crowbar’ being an instant banger, there is no question that this is one hell of a support slot.

Hot Milk hail from Manchester and have been carving out a career for themselves thanks to their blend of self-described ‘Emo Powerpop‘. Check them out for yourself via the video link below;

Tickets for Dublin from €79.50 including booking fee on sale now via Ticketmaster outlets nationwide. 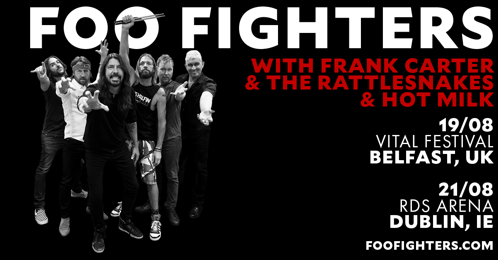