The ten-date tour begins in Manchester on 4 November and calls through Birmingham, Nottingham, Dublin, Belfast, Swansea, Bournemouth, Bristol, Glasgow and finishes in London on 14 November.

You can buy tickets and meet the band VIP packages from HERE. Support comes from Escape the Fate and Scarlet Rebels.

“After celebrating our most successful UK Tour EVER back in December…12 out of 12 SOLD OUT shows…we thought “how can we top this?” Chris Jericho says. “Well after much brainstorming and vodka drinking, we think we figured out a way….by booking our BIGGEST UK Tour EVER!!  We are teaming up with our bros in Escape The Fate to return to the magical kingdom that has always housed Fozzy’s largest and loudest fanbase, to Save The World once again and blow the roof off of the biggest venues we’ve ever played!  So come join us and sing Judas and I Still Burn louder than Lemmy, when we return to your amazing shores this November!”

Fozzy will be playing songs from their new studio album, Boombox, which was released on 6th May via Mascot Records/Mascot Label Group.

The 12-track collection also features their US Top 10 singles “Nowhere To Run” and “Sane.” Boombox, the follow-up to their massive 2017 album Judas, is available now digitally and on CD with vinyl shipping later this year.

Tickets on sale from online platforms and usual outlets. 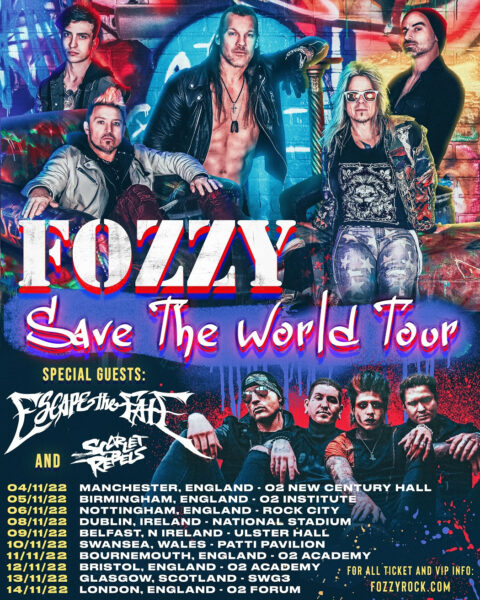