After recovering from a serious bus crash earlier this year, The Dillinger Escape Plan continues their final European tour, starting off with two concerts in Ireland. On the 9th of June, the technical heralds of chaos tore Dublin a new one… 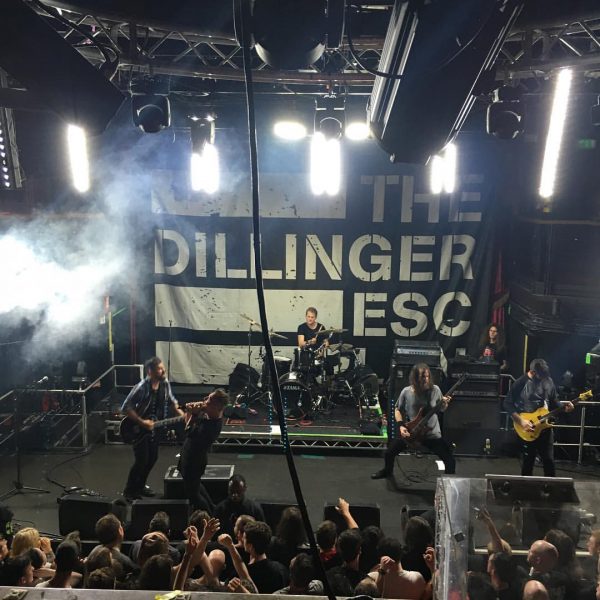 Hailing from Wicklow, Rian Trench aka Trenchurian supported The Dillinger Escape Plan for both Irish gigs. For connoisseurs of local electronica acts, Trenchurian is one-half of the electronic duo Solar Bears. The mix of ambient electronica and old school hardcore with traces of trip-hop and jungle was a peculiar choice as a support for a band that will conjure absolute drainage of mental and bodily capacity. Perhaps it saved the crowds energy for what is about to come. Some people in the audience are responding by dancing and raving. Rian Trench is highly focused on his set and delivers a solid half an hour of versatile electronica. Metal and heavier types of electronica do have a similar kind of energy and inspire motivation to fulfil a quest. As a preparation for The Dillinger Escape Plan, there only very few heavy metal bands can match their energy. The reputation of The Dillinger Escape Plan concerts is legendary and first-time goers (like this humble person) are shitting themselves.

Restless people are filling The Academy. There is a nervous tension and electricity is slowly charging the air. The first rows of the audience are preparing themselves for battle. During the calm before the storm, Faith No More’s song ‘Epic’ heralds the beginning of their show – “You want it all but you can’t have it, it’s in your face but you can’t grab it” sets the mood and the lights blow out.

The Dillinger Escape Plan calmly enter the stage while pulsating bass waves flood the audience. You can hear intestines turning. The moment The Dillinger Escape Plan opens their set, the crowd becomes a whirlpool of limbs. Down becomes up as legs are soaring through space. The flashing white lights create a stark contrasting of the figures as dramatic as a baroque painting of hell while the crowd is drifting back and forth between members of the band. Every member of this band is creating physical connections with the people in their reach. They are grabbing sweaty fingers and faces, the border between stage and audience is meaningless as the frontman, Greg Puciato, howls into the microphone with the crowd and people are grabbing at the guitars.

The strobe lighting amplifies the musical franticness and creates a heightened alertness. Only being able to see in clips in this brawl of bodies makes your senses work double time. The vessels on the singer’s neck are thick as rope while guitarist Ben Weinman plunges into the crowd and sails on top of hands. Just like their music, The Dillinger Escape Plan are pushing the borders of a concert. The audience has become a merciless tide of appendages. When they are not squat jumping, the musicians are stumbling across the stage as they are letting their music shove them in different directions. Each member seems hyper-focused in their epitome of mania.

Anyone who is familiar with The Dillinger Escape Plan’s discography is aware of their eagerness to experiment and take unexpected turns to opposing musical genres. Their ability to show musicality, whilst being possessed in a live situation therefore is remarkable. The band shows dimensions of their craze through a solid command of dynamics. Their projection is forceful, but can easily become mellow in the next breath. Each member of the band can control melody, just to lose control of their bodies again.

After observing the first half of the gig from a safe haven, I enter the crowd. People are chewing on tinfoil. Most of the time, witnessing The Dillinger Escape Plan is not enjoying music in the traditional sense, for the majority of the songs do not conform to the rules and regulations of aesthetics and harmony. It appeals to a feeble state of a mind that is usually strong. When nothing makes sense and the usually stable ground under your feet is crumbling as you stand at the brink of insanity. I don’t mean this word in a hyperbolic sense. I mean the state in which you are when your grasp of reason is virtually slipping. If you have been in that place, matters are out of your hand, the only thing you can do is screech in fury when you realise you cannot contain your destructive potential anymore.

There is a feeling of your own nails digging into your skin, drawing blood, the sensory transmission of that pain is reminding you of your body in space. Being here in this crowd is a communal exorcism of madness.

It wouldn’t be a Dillinger Escape Plan gig when nobody at some stage hangs dangerously off the ceiling. Greg Puciato lets out a sarcastic cheer before he lets go. The body count after he jumps off the light tech balcony and hits the audience is impressive. There is a dent in the crowd and people are scrambling to reassemble themselves. The band finishes their last song and say farewell and people leave The Academy smiling. 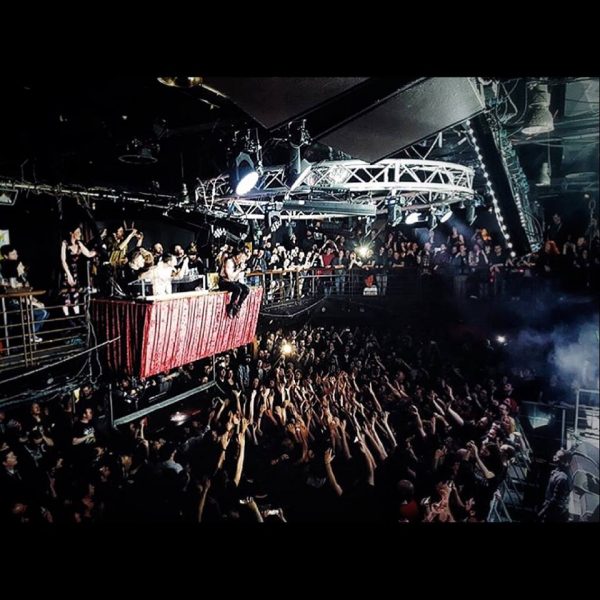