INTERVIEW – MUNICIPAL WASTE “We’re sitting on a lot of new material so we’re just gonna do another album”. TONY FORESTA


Overdrive caught up with Municipal Waste/Iron Reagan frontman Tony Foresta just before they hit the stage for their return to Belfast as part of their awesome ‘Winter Tour 2019’. Limber up, get your hi-tops on and dive in…. It’s pissing rain in Belfast. To accompany this glorious weather, the wind is blowing harder than a $10 hooker which makes the confines of the Limelight that much more welcoming.

Tonight the Northern Irish metal community are treated to one of the most tantalising and (lets’ face it) eclectic line-up’s this writer has seen in a long while.

Municipal Waste, Toxic Holocaust, Enforcer and Skeletal Remains are in the building and are preparing to do all kinds of damage to the packed venue.

But first, one calm and relaxed Tony Foresta emerges from the far end of the venue with an bourbon and coke to talk about both his bands (Municipal Waste & Iron Reagan) as well as a his love for Bloodstock, new albums, his favourite music video and much more…. 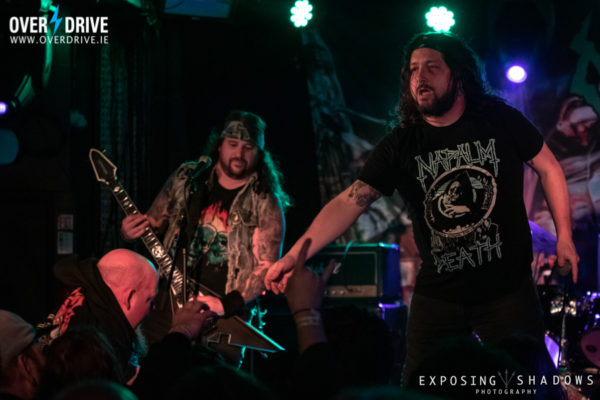 OD – Firstly, how did this Winter Tour come about as the line up is fucking sick? Did you guys have any say in the bill?

TONY – We booked all of the bands personally for this tour. There were some other bands that we wanted also but they just couldn’t do it. But this line up really worked out great. We really wanted to mix things up, so, you have Skeletal Remains, Toxic Holocaust, Enforcer and Municipal Waste. It’s different, but it’s kind of the same in a way.

I’m a 90’s kid at heart, so I like mixing bills, and this one is mixed that’s for sure, but it goes together so well.

Also, we picked this line up for our own sanity. If we (Municipal Waste) play with four thrash bands every night, it’s like: ‘God-Damn it man‘ there’s so much other cool shit out there and we like to really mix things up as much as we can.

OD – ‘The Last Rager’ EP is not a subliminal message that this is the end of MW, is it?

TONY – We’ve had that song title for over 10 years [Laughing]. We’re not going anywhere man. We didn’t think about it until after we released it and we were like: “Oh shit, people are gonna think that this is us leaving the building“. [Laughing]

We find it kind of funny, as it keeps people on their toes, so to speak. We love stirring shit [Laughing].

OD – Is this mini-album/EP just a compilation of left over tracks from the ‘Slime and Punishment’(2017) recordings? OD – Was that a good experience, and can you see this being the way to record going forward?

TONY – Yeah, it was really fresh and to be honest, I think we’re gonna be doing things that way in future. Actually, this EP is one my favourite things we’ve done. There are releases that we have done in the past that literally make me cringe.

TONY – I guess, it’s more from the perspective of vocal performance on some tracks. I’m like: “Ugggggh, I sound so fucking weird there” or “I could have totally done that so much better“.

OD – So, “The Last Rager” is a release that you’re totally happy with from start to finish?

TONY – Yeah, totally. It’s funny because there’s a part on this EP where I took out a huge chunk of vocals, it was on the track ‘Rum for your Life‘. There was this part in the original song where I was kind of talking for a bit over the music and when I listening back, I was cringing. [Laughing]

TONY – [Laughing] No, man it was kind of like a Suicidal Tendencies vibe and don’t get me wrong, I wasn’t trying to be like Mike (Muir) but it was me just rambling. It’s actually kind of funny and I might just do it live. So anyway, I decided to change these lyrics very fucking last minute. I called up just before the album was going to press and was like; ‘Hey can we take a part of the lyrics out of the track?” and it was like the day before it was going to be pressed.

It was taken out and then it had to go back to getting it all ready for press. I literally didn’t think it was gonna be taken out as it was the very last moment. Ryan (Guitars) range me and he was like; “We had that part taken out man, it’s all cool.”

OD – We just spoke with Phil Rind (Sacred Reich) a few days ago and we were talking about the 7”split you did together. Can we expect any more releases like this in the near future?

TONY – Well, I’m not gonna say either yes or no. To be honest we’re sitting on a lot of new material and I reckon we’re just gonna go for another album. It took us five years to make ‘Slime…” and now we’re only 2 years deep and we’re ready to go again!

I’ve been so busy with Iron Reagan and Municipal… that I’m actually taking 5/6 months off, just because I’m fucking overworked. It’s finally come to a point where I’ve hit a wall with both projects and I’m exhausted from it.

OD – Did you think Iron Reagan would have been as successful as it was?

TONY – Honestly! Not in a million years. [Laughing] Now, it’s like seven years have just flown by and I’m racking up over 200 shows a year, so I think it’s time to take a short break and catch my breath.

I’m looking forward to just getting home, relaxing and writing some new shit for both projects.

OD – When you look back on ‘Self Titled EP’ (2001) to now, do you feel that the band has gone through a growing period like if ‘The Art..” is the teen years where are you now with ‘Slime and Punishment’ and ‘The Last Rager’? TONY – Nope! [Laughing] Our shows are just as fucking crazy today as they were back in the day when we started out. Last night there were fuckers diving off the bar, it was insane. and also very awesome.

The boogie-board thing served it’s time and we just moved on from that but the intensity is still there. No question about that. I feel that if we were still clinging onto the gimmicks of the live shows rather than making new music, we wouldn’t be a band anymore. Also, that would be annoying as shit. [Laughing]

OD – I’ve seen you break crowd-surfing records at Bloodstock, have you attempted to try this anywhere else and if so, how did they do? Is Bloodstock still the reigning champion?

TONY – Firstly, I have to say, I fucking love that festival so much. It’s awesome! We’ve done the crowd-surfing record twice now at Bloodstock and no, we’ve never tried it anywhere else.

I’m pretty sure Gojira broke our record so we had to go back there and up our game and take home the trophy once again, which we did. Bloodstock for me is one of the top three festivals in the world for sure and I’m just stoked that we hold that record. We’ll have to come back again and bump up those numbers [Laughing].

OD – Speaking of Bloodstock, you get to play a lot of festivals, how does BOA compare to the rest as it’s more of a ‘family’ atmosphere than others?

TONY – I totally agree with you. There is a feeling and atmosphere at Bloodstock that’s just totally unique. The people involved with Bloodstock have been nothing but awesome to Municipal Waste and one of the other things I love about that festival is that I get to walk around and not get fucked with. It’s a real community vibe which I was just blown away with when I first discovered it. A lot of metal festivals have a certain vibe and then there’s Bloodstock. I organise a Metal Festival where I live, and I get how difficult it is to put something like that on, and the BOA team do a really great job and they make the bands feel really comfortable too, which is just awesome.

OD – MW are one of those bands that can jump on a tour with the likes of Napalm Death and then Suicidal Tendencies with out batting an eyelid from the metal community. Do you find that your acceptance from many corners of the metal universe to be humbling, or are you just chancing your arm?

My other band (Iron Reagan) did a fucking tour with Volbeat! I mean, what the fuck? [Laughing] It was an amazing experience. I don’t want to pigeon-hole my music and the more eclectic line-up’s we play, the better in my opinion.

OD – With regards to Iron Reagan, are there any plans to bring it over to Europe for a proper tour?

TONY – Well, we had a lot of shit planned but as I was saying earlier, I just need to take some time out to chill for a bit. You’ll see us pop up here and there over the Summer next year, for a few festival appearances but no long-ass tours as of yet.

TONY – Well, we’ve actually tracked drums for a a brand new Iron Reagan album. We’ve currently got about 40 tracks, or something insane like that. But that will not see the light of day for at least another year. You’re the fist person I’ve told that too [Laughing]. We’ve done enough to a point that we want to try something different with this next album. We have lyrics, riffs, tracks and shit-loads of stuff happening, but as I said, it will be 2021 by the time that comes out.

We only have one show booked for next year and that’s in Mexico, so if we were asked to play at a UK festival, we would be all over that!

OD – What was the most fucked up thing you’ve seen during a show or on tour that comes to mind?

TONY – Ummm, since we’re playing Leeds in a couple of days, I remember one time when we played there, this guy just kept getting naked in the crowd and I mean, balls, butthole, dick naked [Laughing]!.

The security eventually kicked him out and it was fucking snowing outside and we could all see him outside through the glass window freezing his ass off and the crowd started chanting; “Let him in, Let him in“, so they finally let him back in and the show continued. That was some funny shit.

OD – If you can play us out with one of your favourite music videos and the reason why you picked it that would be awesome.

TONY – As soon as you asked me that question, WAX ‘Southern California’ came to mind. It’s directed by Spike Jones who’s one of my favourite directors and I’d love to work with him one of these days. Anyway, the video is awesome, the track is killer. Enjoy!

Municipal Waste are currently out on the road with special guests Enforcer, Toxic Holocaust and Skeletal Remains. Click here for tour info.

The Last Rager is out NOW via Nuclear Blast. Pick up your copy here.