UK Heavy Metal icons, Iron Maiden have been teasing what can only be the bands’ new album. Get all the latest below…

Heavy Metal legends, IRON MAIDEN have released another video teaser inviting their fans to the “Belshazzar’s Feast” – watch below…

“Belshazzar’s Feast” is the story of the writing on the wall in the Bible, and IRON MAIDEN fans have been speculating that the band has been teasing the announcement of its 17th album, possibly to be titled “Writing On The Wall“.

In the 14-second video message posted to MAIDEN’s social media earlier today, the “Belshazzar’s Feast” poster is removed from a wall to reveal the slogan “WOTW“, which fans have theorized refers to as “Writing On The Wall“.

Late last month, Dickinson sported a “Belshazzar’s Feast” shirt in a TV interview with Sky News. During the conversation, he teased MAIDEN’s future plans, saying, “I can’t tell you what it is, but it’s right in front of you.”

A number of other recent MAIDEN-related graphics have featured the slogan “WOTW“. In addition, a “Belshazzar’s Feast” poster was spotted at the Download Pilot festival last month bearing the date “15/07” and the letters “IMXVII,” which fans believe are a reference to IRON MAIDEN and 17 in Roman numerals.

IRON MAIDEN hasn’t released any fresh music since 2015’s “The Book Of Souls” LP, which was recorded in late 2014 in Paris, France with longtime producer Kevin “Caveman” Shirley.

“The Book Of Souls” was the longest MAIDEN album, clocking in at 92 minutes, with lyrics heavily based on the themes of death, reincarnation, the soul, and mortality.

Back in May 2019, Italian website Maiden Concerts first speculated that IRON MAIDEN was putting the finishing touches on a new album. The site concluded that the LP was nearing completion after gathering social media evidence that all six members of the band, their wives, and Shirley were in Paris at the same time.

The producer even posted new pictures of Guillaume Tell Studios, where MAIDEN recorded “Brave New World” (2000) and “The Book Of Souls“, saying he was finalizing a major project.

During MAIDEN’s summer 2019 North American tour, Dickinson hinted at new material, telling the crowd at the group’s Oakland, California concert: “New IRON MAIDEN songs — sooner than you think.” At MAIDEN’s Nashville show in August 2019, Dickinson said that fresh music from the band wasn’t “beyond the bounds of possibility,” adding that a new MAIDEN record was essentially a “certainty.”

If the reports of a new MAIDEN album are true, it will mark the band’s sixth to be produced by Shirley, who has worked with MAIDEN for the past two decades.

In addition to MAIDEN, Shirley has collaborated with dozens of notable acts, including Joe Bonamassa, JOURNEY, DREAM THEATER, and LED ZEPPELIN.

During the making of “The Book Of Souls“, Dickinson was diagnosed with a cancerous tumor at the back of his tongue. He recorded all the vocals for the album with the tumor before undergoing treatment and making a full recovery in time for the LP’s release in September 2015. 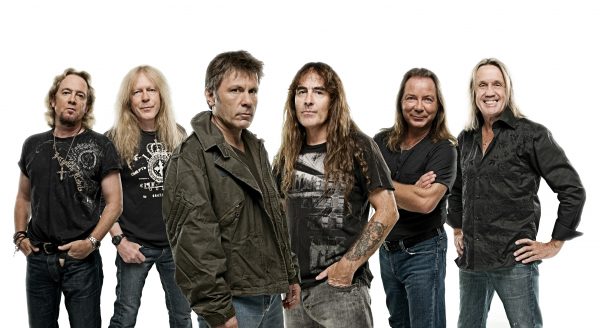