A tantalising package of crushing metal has pulled into Dublin’s city centre for an evening of relentless riffage and punishing brutality! Having been a highlight on the gig calendar for some months now, Kreator, Sepultura, Soilwork and Aborted brighten up the mid-week stagnation, to a thirsty metal audience! Overdrive brings you our report from the front line!

With a considerable portion of tonight’s ticket holders present for Belgian death metal specialists ABORTED to hit the stage at the respectable early start of 5.30pm, is indeed a good sign for what we can expect from the Irish metal brigade this evening. 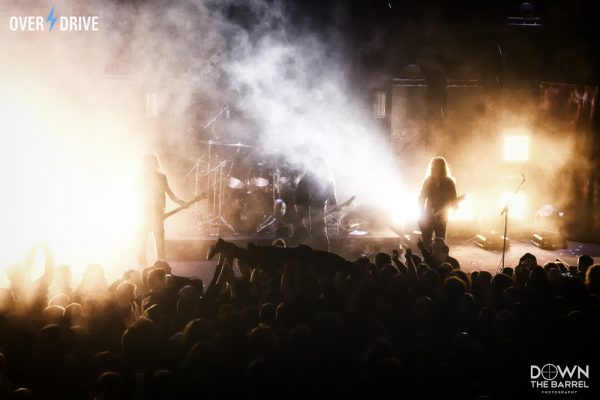 Tearing straight into the brutal end of their catalogue, ABORTED waste no time in bringing their A-Game to the Irish capital, as they snarl through classics such as ‘Divine Impediment‘, ‘Meticulous Invagination‘ and the ferociously brilliant ‘Termination Redux‘. Vocalist Sven De Caluwe, stalks the stage with a murderous look in his eyes which is truly frightening at times, while six string antics from Mendel Bij De Leij and Ian Jekelis hack the scalps off the punters in the front row with buzz-saw riffs that are like metaphorical blasts of fine salt cascading into a gnarly open wound, before finishing with ‘Bit by Bit‘. Brutally savage and equally impressive. Hopefully Aborted will be back on our shores in the not too distant future. 3.3/5 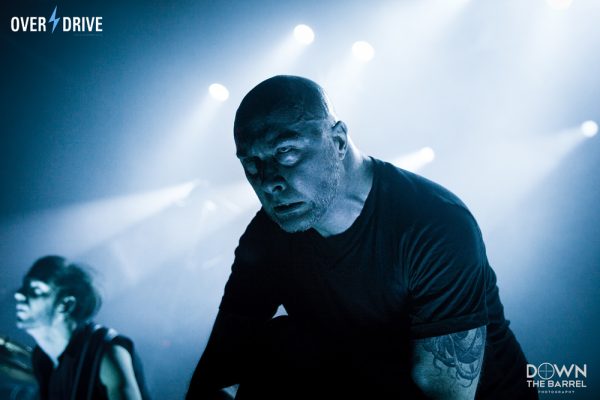 Next up is SOILWORK who draw in the stragglers that spent the time during ABORTED’s set bothering the merchandise guys. Sounding a little ‘lite’ after the previous offerings, the Swedish five-piece ease into a selection of melodic death metal flavours in the style of ‘The Ride Majestic‘ and ‘Bastard Chain‘, which seem to be going over well with tonight’s younger punters.

With the majority of their short set hovering around 05’s ‘Stabbing the Drama‘ and 2010’s ‘The Panic Broadcast‘, SOILWORK do their very best to penetrate the heart of Vicar Street tonight and with each offering, they slowly begin to win over the increasing turnout with their catchy commercial-like choruses and upbeat persona. 2.8/5 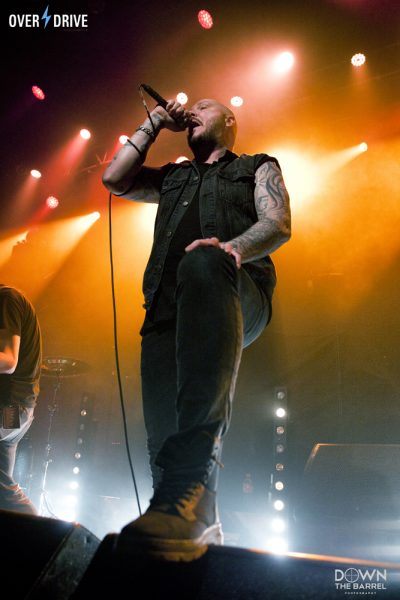 When considering Sepultura’s legacy from their humble beginnings to the jewel in the ‘nu-metal crowd during 90’s, it’s just so damn hard to not yearn for that classic line-up back together, even if it’s for one last crack at the whip. Having been lucky enough to see the band multiple times during their golden years, I have to admit that even after all of this time it’s kind of hard to swallow the current situation between the Cavalera’s and Kisser/Paulo Jr. and tonight is no different.

Recently released ‘Machine Messiah‘ get’s a good airing tonight, with ‘I am the Enemy’ and ‘Phantom Self’ opening the performance, displaying the band shaking off the shackles of their past and pushing forward into the unknown. However, there is one blatantly obvious fact about the selected setlist tonight. The classics don’t seem to gel with the new material as the band seem to have taken a subconscious departure from their infamous rhythmic delivery and is now replaced with layered passages that just don’t seem to connect with a live audience. 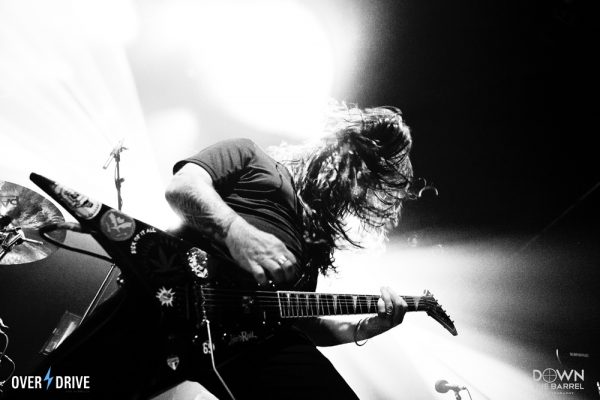 This is abundantly obvious due to the manic reaction within the packed venue, when old chestnuts such as ‘Desperate Cry and ‘Inner Self’ erupt from the stage, followed by an almost instant sedate response for new tracks ‘Alethea‘, ‘Sworn Oath‘ and ‘Resistant Parasites‘, making a total of six tracks from ‘Machine Messiah‘ performed during tonight’s set.

Considering Derek Green has been in the band longer than the Cavalera brothers is a testament to the variety of material they could have played tonight, rather than overloading on an album that was only birthed just over six weeks ago.

Ending with ‘Refuse/Resist‘, ‘Ratamahatta‘ and ‘Roots Bloody Roots‘ confirms the hypothesis that in one sense Sepultura desperately strives to continue regenerating themselves on their own merits post-Cavalera, however, their submissive tendencies to suckle on the fumes of their past is a dominating factor here tonight. 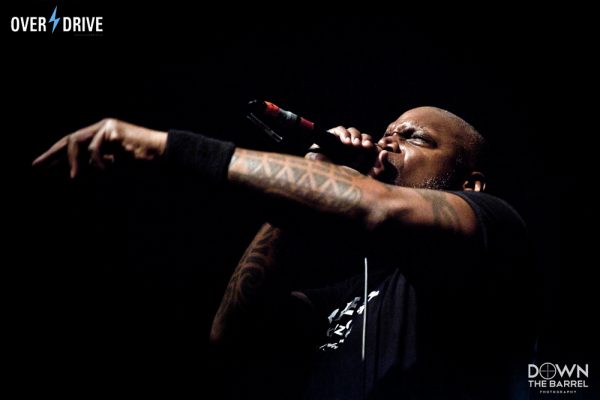 Although the band’s performance was merely a brief outing to pave way for headliners KREATOR, a more balanced setlist from the band’s second wave catalogue would have been greatly appreciated. 3.5/5 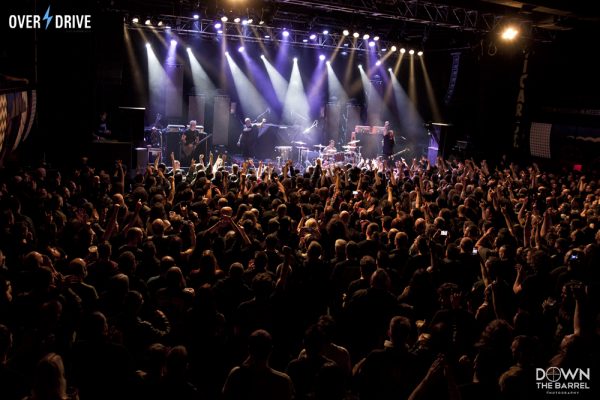 And so to tonight’s headliners! KREATOR are one of those band’s that have survived countless threats to the metal/thrash genre over the past thirty plus years. Much like Slayer, these Germans don’t buckle for anyone. Angry, snarling thrash metal is what Kreator do and they do it very fucking well, thank you very much! 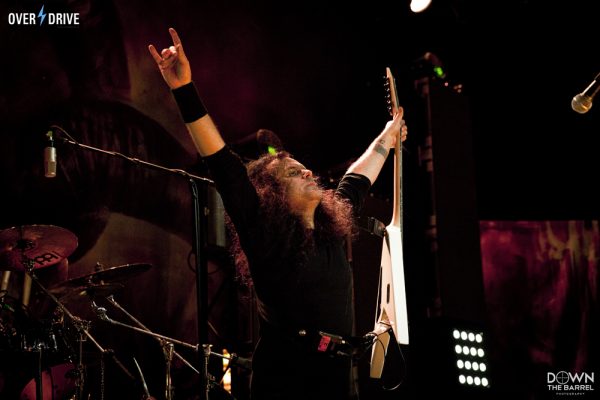 Tonight is a masterclass, not only in metal but in showmanship. Armed with a whole host of production toys, vocalist/guitarist Mille Petrozza takes to the stage like a fish to water. Opening with 2009’s ‘Hordes of Chaos‘ the band’s crystal clear sound is only matched by the metal-as-fuck stage dressing which comes with large LED screens depicting an array of the band’s legendary artwork from over the years.

As they dive back to 97’s ‘Outcast‘ for a tasty rendition of ‘Phobia‘ the crowd lap up every last drop of visceral leaking from the stage’s PA. The title track from this year’s outstanding ‘Gods of Violence‘ goes over as well as could be hoped for as the bodies carelessly fly and tumble through the air above a sea of banging heads and silhouette horns. 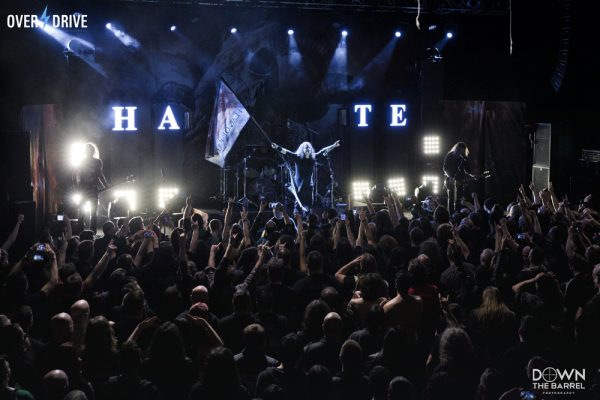 Perfectly timed strobed lights work alongside a series of confetti cannons and streamer explosions only adding to tonight’s savagely entertaining performance. As a four-piece, Kreator maximises every last aspect of themselves on stage giving the audience one hell of a bang for their buck.

Classics such as ‘Total Death‘ work perfectly alongside recent offering ‘World War Now!” and 2012’s ‘From Flood into Fire‘ with ease, keeping a relentless intensity throughout. Having been in this game for well over three decades, KREATOR displays an element that is becoming harder to find amongst the many metal bands of today. They live for playing live and I’m sure will no doubt die for it also. 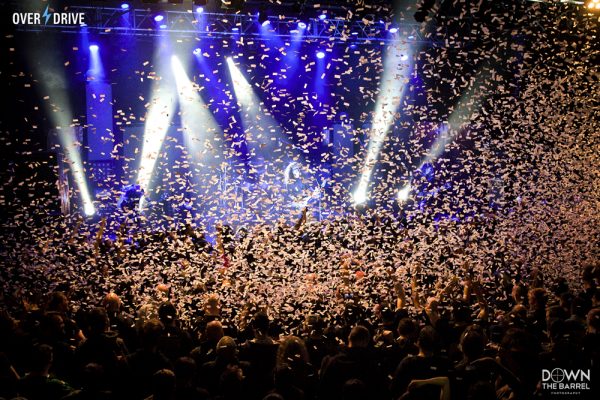 Finishing off tonight’s spectacular performance with ‘Violent Revolution‘, ‘Flag of Hate‘, ‘Under the Guillotine‘ and the legendary ‘Pleasure to Kill‘ makes one wonder how the ‘Big 4‘ actually happened without consideration for a band such as KREATOR.

Tonight was a statement of professionalism, majestic power and a blueprint for how to execute a live performance. 4.5/5

KREATOR have been confirmed as special guests for Bloodstock Open Air this August. For more information, please click this link.

All images by Down The Barrel Photography © 2017